Psychostimulants: Bringing Order out of Chaos

Daniel Carlat, MD
From The Carlat Psychiatry Report
Issue Links: Editorial Information | PDF of Issue
Daniel Carlat, MD Dr. Carlat has disclosed that he has no significant relationships with or financial interests in any commercial companies pertaining to this educational activity.
There are now no fewer than 14 FDA-approved psychostimulants… and counting. This does not include the many generics, the new non-stimulant Straterra or the off-label ADHD meds Wellbutrin (bupropion) and desipramine.

Yes, capitalism is in full swing in the stimulant world. But who’s complaining? Now we have multiple options from which to pick and choose. TCR has spent long hours sifting through the data, speaking with child psychiatrists, and generally behaving like a psychiatric nerd, all in the hopes of bringing you some clarity in a very confusing field.

All stimulants are considered equally effective for core ADHD symptoms; the choice comes down to pharmacokinetics

There are two basic types of stimulants: methylphenidate (Ritalin and its knock-offs) and amphetamine (Dexedrine and Adderall). Within each of these large categories, there are subcategories, depending on the pharmacokinetics of the specific drug. The three typical subcategories are:

Not too bad so far, but the story is more complicated than this, because within the intermediate and long-acting groups, you have meds that release the stimulant continuously, and others that release it in stages, often mimicking the action of taking an immediate-release stimulant twice a day.

To help guide you through the rest of this article, refer to the Official TCR Psychostimulant Comparison Chart below. All the stimulants are considered to be equally effective, in large populations. But as with any medication, some individuals will respond better to one than another. Cylert (pemoline) is not listed in the table because it can cause fulminant liver failure and is rarely prescribed, though it is effective in ADHD. Provigil (modafinil) is not listed, both because it is not a stimulant and because recent data do not support ADHD efficacy. 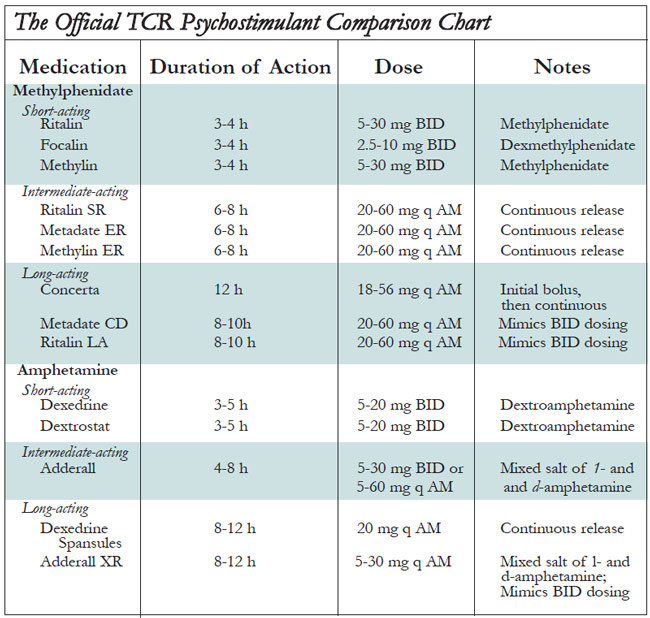 A Mechanism of Action Aside.
Ritalin and Dexedrine actually differ slightly in mechanism of action. Both of them block dopamine (DA) transporters, slowing down the reuptake of DA back into the nerve terminals after they have been released into the synapse. Unlike Ritalin, Dexedrine also causes the release of DA from synaptic vesicles, which may cause it to kick in more quickly than Ritalin; this may be responsible for Dexedrine’s stronger stimulant “punch”, possibly increasing its liability for abuse and for side effects of jitteriness and insomnia.

Anyway, these differences in mechanisms of action of the two drugs provide a tenuous scientific rationale for the observation that some people respond better to one or the other.

The Preparations.
We’ll begin with the methylphenidate preparations. There are three immediate release (IR) players: Ritalin, Focalin, and Methylin. Ritalin and Methylin are identical, in that both are 50:50 mixtures of d- and lmethylphenidate. Focalin is purified dmethylphenidate. The idea here is that since the d- isomer of ritalin is the more biologically active one, getting rid of the l- isomer might improve matters by reducing side effects (though there is as yet no evidence that this is true) and by making it more potent (true, it is more potent in that 10 mg of Focalin = 20 mg of Ritalin, but this presents no obvious clinical advantage). Rumor has it that Focalin will be introduced in a longacting version soon, but again the advantages of this over, say, Concerta, are dubious.

Ritalin SR is one of the oldest sustained release drugs around. It’s basically just ritalin packed in wax, which substantially delays its absorption. Thus, whereas the peak absorption of Ritalin IR occurs about 2 hours after ingestion, the peak absorption of Ritalin SR occurs about 4-5 hours after ingestion. Metadate ER is exactly the same thing as Ritalin SR, only made by a different company (Celltech).

Ritalin LA is a capsule filled with beads. Half the beads are immediaterelease ritalin, and the other half are enteric-coated, delayed release beads. Giving 20 mg of Ritalin LA is like giving two 10 mg doses of regular Ritalin about 4 hours apart. Metadate CD is just like Ritalin LA, a capsule filled with immediate and delayed-release methylphenidate beads. The difference is that only 30% of the beads are immediate release, and 70% are delayed release. So if your patient needs more of a stimulant punch later in the day, Metadate CD might be just the ticket.

Concerta has the coolest delivery system of them all. It looks like a regular tablet, but within it are three compartments: two layers of methylphenidate, and one “push” layer with an osmotically active polymer. Surrounding the whole thing is a methylphenidate overcoat, which dissolves rapidly, delivering 22% of the dose within the first hour. Then, water seeps in through a semipermeable membrane, gradually expanding the polymer compartment, causing drug to slowly escape through a precision drilled orifice at the other end of the tablet. The result? 12 or so hours of continuously released methylphenidate.

Now for the amphetamine preparations. Dexedrine and Dextrostat are both immediate release preparations of d-amphetamine. While the two are basically identical, Dextrostat might kick in a little more quickly, with peak plasma levels 2 hours post-ingestion vs. 3 hours for Dexedrine. Dexedrine spansules are bead-filled capsules that provide an initial dose of amphetamine, followed by continuously releasing drug, with a peak plasma level 8 hours after ingestion.

Adderall is a confusing mixture of four amphetamine salts. The gist is that it is the only amphetamine preparation containing any levo-amphetamine. The immediate release version lasts somewhat longer than any of the IR versions of any of the other stimulants, meaning that Adderall can sometimes be dosed once a day. There is also an Adderall XR, a capsule with both IR beads and delayed release beads. Serum levels peak at 7 hours post-ingestion (vs. 3 hours for Adderall IR).

There you have it. All these drugs work, we all have our preferences based on experience, ease of use, effectiveness of marketing tactics, etc…. Knowing how these drugs work takes some of the mystery away, and will hopefully increase your prescribing flexibility. Ultimately, your patients will be the winners.