Home » Atypicals for Bipolar: And Then There Were Five

Atypicals for Bipolar: And Then There Were Five

Daniel Carlat, MD
From The Carlat Psychiatry Report
Issue Links: Editorial Information | PDF of Issue
Daniel Carlat, MD Dr. Carlat has disclosed that he has no significant relationships with or financial interests in any commercial companies pertaining to this educational activity.
We knew it was about to happen. We just didn’t know it would happen all at once. Between July and September of 2004, Seroquel, Geodon, and Abilify sequentially won approval for the treatment of manic episodes in bipolar disorder. Which means that now all of the newer atypical antipsychotics have been admitted to the bipolar club, which until December 2003 (Risperdal’s approval date), was monopolized by Zyprexa.

To help you cut through the confusion, here’s a comparison chart updating you on what each drug is or isn’t approved for:

Table: Atypical antipsychotics approved for bipolar disorder (as of Feb 2005) 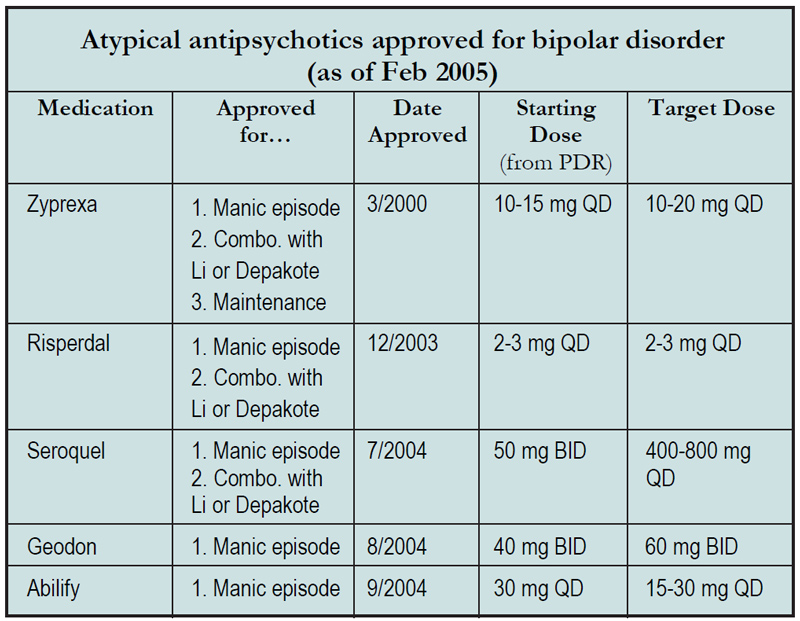 Some comments on the chart:

SUBSCRIBE NOW
Table Of Contents
The Story of Clozapine
Atypicals for Bipolar: And Then There Were Five
Philip G. Janicak, M.D. On Using Atypical Antipsychotics
Clozapine: Is it truly better than the rest?
Metabolic Side Effects: Here We Go Again!
DOWNLOAD NOW
Featured Book
Featured Video
Featured Podcast
Recommended