Daniel Carlat, MD
From The Carlat Psychiatry Report
Issue Links: Editorial Information | PDF of Issue
Daniel Carlat, MD Dr. Carlat has disclosed that he has no significant relationships with or financial interests in any commercial companies pertaining to this educational activity.
Okay, we’ll lay our cards on the table right away. Rarely has TCR been as annoyed by the launch of a new medication as we are by the launch of Equetro. The last time the pharmaceutical industry embarrassed itself this much was when Eli Lilly launched “Sarafem,” calling it a “new” medication for PMDD when it was simply Prozac with a new name and a new (pink) color (see TCR Vol. 2, No. 9).

Like Sarafem, Equetro is being preceded by a sleight-of-hand marketing blitz that includes statements like the following: “The approval of the extended-release carbamazepine capsule, EQUETROTM, with an improved tolerability profile allows for a more rapid dosage titration that should provide physicians with a powerful new treatment option” (Richard Weisler, M.D., as quoted in Shire’s press release on Equetro, accessed 5/7/05 at http://www.shire.com/shirepharma/NewsAndMedia/PressReleases/showShirePress.jsp?ref=367).

Memories of the Sarafem fiasco come back to haunt us.

Far from being a “new treatment option,” Equetro is an extended-release version of carbamazepine (CBZ), a medication that has been listed by the APA Treatment Guidelines as a second-tier mania treatment for years. CBZ has never before received FDA approval for this indication, primarily because it is available generically and therefore cannot generate the income stream required to justify the expense of new clinical trials.

Nonetheless, extended-release versions of old medications are released all the time, and sometimes they represent real advances, primarily in terms of tolerability. So why is TCR getting so worked up about Equetro?

Because even the extended-release formulation isn’t new, having been available since 1997 under the name “Carbatrol,” also produced by Shire. Equetro and Carbatrol are identical in every way, except that Equetro is indicated for bipolar disorder, while Carbatrol is indicated for epilepsy and trigeminal neuralgia. (They also differ in capsule color--Equetro comes in a bold aquamarine vs. Carbatrol's so-90's blue-green). To embarrass Shire further, even Equetro/Carbatrol isn’t original, as it was predated by Novartis’ Tegretol XR, another extended-release CBZ that was FDA approved for epilepsy and trigeminal neuralgia in 1996.

Apologists for Shire argue that the company has done psychiatry a great service by having bothered to conduct large-scale studies of CBZ for bipolar disorder, and that it is only fair that FDA has rewarded them by allowing them to affix a new name to an old drug. That’s a debatable point.

Nonetheless, it’s time to end the rant-and-rave portion of this article and to move on to the clinical information that you need, with particular focus on whether the extra expense for an extended-release version is worth it.

While immediate-release CBZ is commonly prescribed off-label for bipolar disorder, controlled trials for this usage have been fairly small. A review pooled the results of five double-blind controlled studies that compared response rates of CBZ with response rates on lithium and Thorazine. Out of a total of 188 patients with acute mania, CBZ yielded a response rate of 50%, vs. 56% with lithium and 68% with Thorazine, with no statistically significant differences (J Affect Disord 2000; 59 Suppl 1:S31).

Equetro outperformed placebo in both studies. In the 2004 study (J Clin Psychiatry 2004; 65:478-484), the response rate (defined as a 50% improvement in the Young Mania Rating Scale) was 41.5% vs. 22.4% on placebo. The 2005 study (J Clin Psychiatry 2005;66:323- 330) reported more robust figures, with an Equetro response rate of 61% vs. 29% on placebo. Why this difference between the two studies? Probably because there were far fewer patients with mixed episodes in the 2005 study (21% of patients entered the study with mixed episodes) than in the 2004 study (59% mixed). Thus, it appears that Equetro is more effective for typical manic presentations than for mixed presentations, a finding that runs counter to CBZ’s anecdotal reputation as a good drug for “atypical” bipolar disorder.

So far, so good. Taken together, these two studies imply that Equetro (and, by implication, other versions of CBZ) is an effective medication for treating manic episodes, particularly when the episodes are not mixed. The response rates are similar to those reported in studies of other mood stabilizers and atypical antipsychotics for bipolar treatment.

But what about side effects, the legendary downfall of CBZ? Equetro trounced placebo on side effects, with statistically higher rates of dizziness (44% of patients on Equetro vs. 12% of those on placebo), somnolence (32% vs. 13%), nausea (29% vs. 10%), and actual vomiting (18% vs. 3%). Those who have used CBZ over the years will recognize this rogue’s gallery of side effects. Fortunately, only one patient out of 443 experienced low white blood count, a rare but potentially catastrophic side effect of CBZ that is the subject of a black box warning in the PDR.

As clinicians, our main quandary is whether the increased cost of Equetro or Tegretol XR is justified. There are two issues here: efficacy and tolerability. Extended release formulations yield more consistent blood levels over time, which is a real advantage in the treatment of epilepsy because low blood levels of anticonvulsants lead to breakthrough seizures. However, there is no evidence that consistent blood levels are advantageous in bipolar disorder. In the Equetro studies, for example, there was no correlation between blood levels and therapeutic response.

With regard to tolerability, extended release CBZ is presumed to have an advantage over immediate release CBZ, but this is based primarily on anecdotal reports. In fact, many patients on Equetro reported very unpleasant side effects, including that 18% incidence of actual vomiting. Clearly, as is true for regular CBZ, starting at low doses, titrating slowly, and dosing mainly at night will likely improve patient acceptance.

The chart below lists currently available CBZ formulations, indications, and pricing. Whether Equetro seems like a worthwhile drug will depend upon your perspective and your reading of the research. But please, don’t call it a “new treatment option”!

Table: Carbamazepine Formulations Available as of 2005 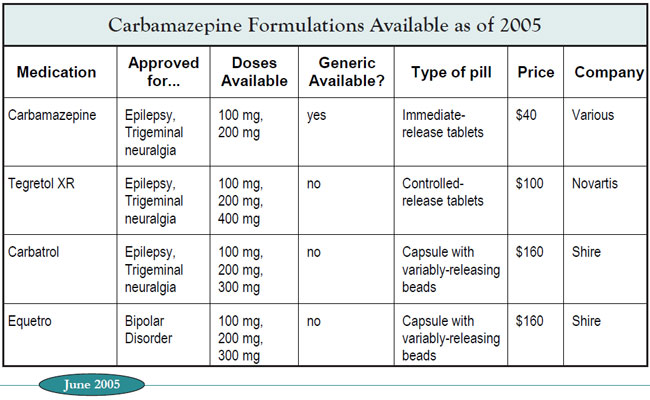