From The Carlat Psychiatry Report
Issue Links: Learning Objectives | Editorial Information | PDF of Issue
There’s a lot of discussion in the medical journals about nutritional psychiatry, which is the concept that certain diets can prevent or treat psychiatric disorders (Marx W et al, Proc Nutr Soc 2017;76(4):427-436). We’ve covered this topic before (see TCPR August 2010, “Alternative Treatments for Depression”), and since then there has been more published evidence. Most recently, interesting results were published from the first randomized controlled trial of an antidepressant diet.

The SMILES trial (Supporting the Modification of Lifestyle in Lowered Emotional States), conducted in Australia, was a 12-week, single-blind, randomized controlled trial of a dietary intervention in patients with moderate to severe depression (Jacka FN et al, BMC Med 2017;15(1):23). The main inclusion criteria were a MADRS depression scale score of > 18 and a Dietary Screening Tool score of < 75 (out of 104). The Dietary Screening Tool measured dietary quality, with lower scores indicating poorer-quality diets.

During the trial, 67 patients were randomly assigned to either a modified Mediterranean diet called the ModiMed diet (n = 33) or a control consisting of social support without dietary advice (n = 34).

The intervention consisted of dietitians delivering 7 one-hour individual dietary support sessions. During these sessions, participants in the intervention group received personalized dietary advice and nutritional counseling. This was reinforced through motivational interviewing and goal setting. The first 4 sessions were held weekly, and the rest were offered every 2 weeks. This group learned about the ModiMed diet, healthy eating guidelines, and ideas for meals and recipes; they also received a gift basket of recommended foods.

Patients in the control group received supportive counseling (called “befriending therapy”) with the same session frequency as the nutritional counseling group but without any dietary advice. To assess adherence to the ModiMed diet, all participants filled out a 7-day food diary both at the beginning and at the end of the study.

While the results look impressive, the study was not perfect. With only 67 subjects, it was a very small clinical trial. Since participants were not blinded to their conditions, it’s possible that the intervention group’s greater improvement was due to high expectations of the special diet. In addition, 80% of patients in the diet and control groups were receiving some type of antidepressant treatment during the study, be it medications (69%), psychotherapy (45%), or both (14%). 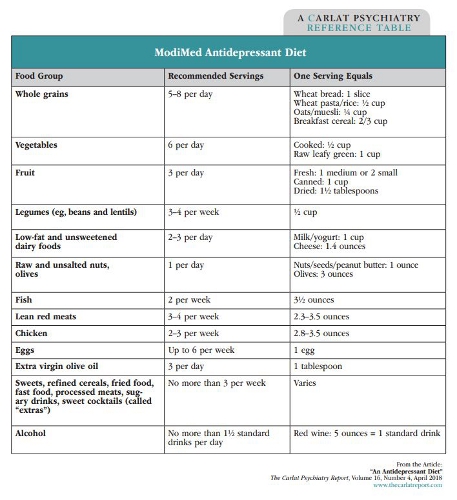 
Additionally, the study selected patients with a poor-quality diet at entry, so patients who switch from a reasonably healthy diet to the ModiMed diet may not achieve the same level of response. It is impressive that the researchers were able to motivate depressed patients to change from a poor diet to a healthy one, and notable that 7 hours of counseling were needed to effect that change. Nonetheless, this is yet another data point endorsing the value of the Mediterranean diet, which prior research has shown to be beneficial for cognitive functioning, heart health, and diabetes.

Assuming it does in fact work as an antidepressant, what might be the ModiMed diet’s mechanism of action? The diet is significantly lower in measures of dietary inflammation than the typical American diet, which is high in meats, saturated fats, and sugar. It’s hypothesized that dietary inflammation has some role in the development of depression (Lai JS et al, Nutr Res 2016;36(3):234–245).

TCPR Verdict: Although the supporting data are still limited, consider prescribing the ModiMed diet to your depressed patients—it won’t harm them, and it may help both their minds and bodies.
General Psychiatry
KEYWORDS antidepressants