Clinical Professor of Psychiatry at New York University School of Medicine. Co-editor of the Textbook of Traumatic Brain Injury 3e (APA, 2019). Dr. Silver has disclosed that he has no relevant financial or other interests in any commercial companies pertaining to this educational activity

TCPR: How do we know if the brain is injured after a patient hits their head?
Dr. Silver: That’s where the second criterion for TBI comes in. To diagnose a TBI, there has to be some evidence of an alteration in brain function at the time of the injury. Usually it would be within moments of the injury. Some experts allow more delay, such as hours or even 1–2 days, but the further you get away from the event, the more likely it is that something else is the cause of those symptoms.

TCPR: What are the symptoms to look for?
Dr. Silver: They can range from a coma, where the person is not arousable, to amnesia, where they don’t remember things before or after the injury. With milder injuries, patients may feel dazed or confused, or see stars. We tend to see mild injuries more often in sports. Some people use the word “concussion” for those mild injuries, but that term is not well defined. A person with a mild TBI will often complain of cognitive problems, fatigue, depression, insomnia, irritability, and physical symptoms like headache, dizziness, tinnitus, and heightened sensitivity to noise and light, as well as to the effects of alcohol.

TCPR: How long do those problems last after a mild TBI?
Dr. Silver: The best results are with sports concussions in a healthy group of individuals, such as Division I athletes. In that group, 90% get better in days and 95% improve within 4 weeks (McCrea M et al, JAMA 2003;290(19):2556–2563). It can last longer in other groups, like 1–3 months. When a patient complains of ongoing problems for months or years after the injury, it’s likely that they stem from multiple causes, including psychiatric and physical causes. Post-traumatic stress, depression, and anxiety disorders can start after a concussion and cause concussive-like symptoms to persist. Another cause is neck problems.

TCPR: Neck problems?
Dr. Silver: Whiplash and neck injury can result in the same symptoms of concussion: dizziness, poor concentration, insomnia, and fatigue. Everyone with a head injury should have a physical exam of the neck for range of motion, tenderness, and muscle spasms.

TCPR: We’re hearing a lot about chronic traumatic encephalopathy (CTE) from repetitive concussions, such as in football players. How does that differ from TBI?
Dr. Silver: TBI is an event, while CTE is a process that unfolds over time. We know a lot less about CTE, but it’s not due to a single concussion; it appears to be the result of repetitive concussions in some people. We don’t yet know who is susceptible to CTE and what makes them susceptible, but lots of people are exposed to TBI and the incidence of CTE is relatively low, so it’s likely this is a small minority. It might be that people who develop CTE have a genetic susceptibility to dementia that’s unleashed by the repetitive injuries. We are at the early stages of research here.

TCPR: TBI can cause a lot of symptoms. Where do you start?
Dr. Silver: I usually address sleep first. Other symptoms tend to improve if the patient is sleeping better. If behavioral approaches don’t work for the insomnia, I’ll often use trazodone or mirtazapine. I try to avoid benzos because they can impair memory and balance, but I do occasionally prescribe them.

TCPR: Any special tips for treating depression after a TBI?
Dr. Silver: Patients with TBI do respond to antidepressants, and you can use just about any antidepressant in this population. You may have to be more careful about certain side effects, like fatigue or, with bupropion and the tricyclics, seizures. Very often their mood will improve, but the problems with concentration, fatigue, sleep, or apathy often persist. And that’s where we end up using some novel medications to target those symptoms that may be unique to this population.

TCPR: Like what?
Dr. Silver: I try to start with the easiest one first, which is usually amantadine. This medication was developed to treat the flu, but it has been studied in TBI and in other conditions with fatigue like multiple sclerosis. Amantadine has some mild stimulant properties, but it’s not a controlled drug. It seems to help attention, fatigue, and irritability. I start with 100 mg in the morning, and then after a week I’ll go to 100 mg in the morning and 100 mg in the afternoon. Sometimes I’ll go to 300 mg/day, but if it doesn’t work after 200 mg/day, I’ll usually stop.

TCPR: And if amantadine doesn’t work?
Dr. Silver: I may try a psychostimulant like methylphenidate or dextroamphetamine varieties, or a wakefulness-promoting agent like modafinil or armodafinil (Ed note: These last two are rarely covered by insurers but are available for $20–30/month through GoodRx.com). I start at a very low dose, like methylphenidate 5 mg/day. I’ll raise it every couple of days based on response, but if it doesn’t work at 15 mg/day I’ll usually switch to a dextroamphetamine-based stimulant like Adderall or Vyvanse.

TCPR: How do you treat apathy?
Dr. Silver: We have not had much success there. Apathy is usually something that bothers the relatives more than the patient. The family is upset that the patient is withdrawn and unmotivated but the patient is usually, well, apathetic—they do not care. We often try dopaminergics out of the theory that this is a dopamine deficiency. They just don’t tend to be very successful, including the stimulants and pramipexole.

TCPR: How do you treat memory in TBI?
Dr. Silver: There’s very good Class I evidence for the acetylcholinesterase inhibitors: rivastigmine (1.5–12 mg/day) and donepezil (5–10 mg/day) (Silver JM et al, Brain Inj 2009;23(2):123–132). These can improve memory in people with significant deficits after a TBI, and the patient usually notices a difference. I usually start with donepezil 5 mg/day for 1 month, then 10 mg/day; if the patient is not doing better after 2 months, I stop it. 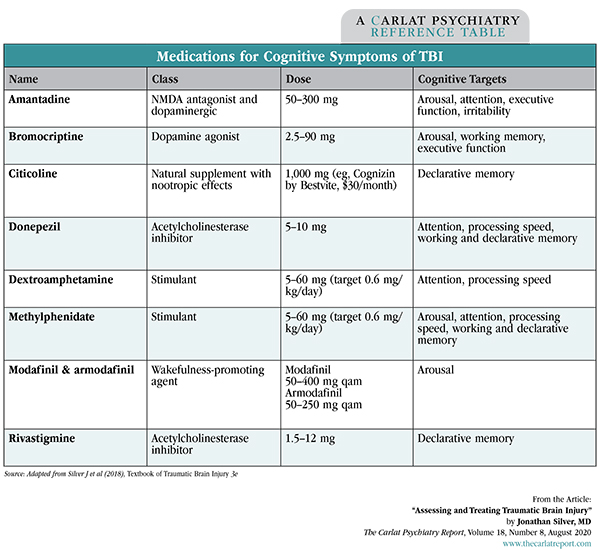 TCPR: How do you assess improvement in memory?
Dr. Silver: You could use rating scales or test cognition. While those approaches are worthwhile, I tend to rely more on functioning and the observation of the patient and significant others. If there’s no functional change, then the treatment is probably not making a difference. Ask the patient and the family if they see a difference. The relatives will often give you a different picture.

TCPR: Irritability is another nonspecific symptom that can come on after a TBI. How do you address that?
Dr. Silver: Yes, irritability and aggression are common problems in this population. One of the first medications I start with is buspirone. It actually has good evidence for irritability in TBI and little risk. I start with 7.5 mg bid and go to 15 mg after 1 week, and it can go up to 30 mg bid. After buspirone, the choice depends on which other symptoms are present. If the patient is irritable and depressed, I’d start with an SSRI. Often the irritability will respond to fairly low doses like escitalopram 10 mg/day or sertraline 25 mg/day. Amantadine is another option for irritability in TBI. It’s a good choice if the patient also has fatigue and attentional problems. And then there’s beta-blockers like propranolol. These have the best evidence of efficacy for irritability after TBI, with propranolol doses up to 640 mg/day.

TCPR: Any risks with propranolol?
Dr. Silver: Most patients tolerate it well. It lowers heart rate and blood pressure, but that effect tends to level off after 300 mg/day. It can cause fatigue and decrease exercise tolerance, and sometimes there are sexual side effects.

TCPR: Amantadine was once called the best-studied medication for irritability in TBI, but some recent studies have been disappointing. Where does it stand now?
Dr. Silver: As I mentioned before, the best evidence is still for beta-blockers. The two best studies with amantadine in irritability after TBI were both done by Flora Hammond. The first was a single-center study that showed a significant improvement with amantadine compared to placebo (n = 76). The second study found no difference. It was a larger (n = 168), multisite study, and it had a large placebo effect. There was significant therapeutic interaction between the staff and the subjects, which makes everyone get better. So it was a “failed” study, and it’s hard to know what to do with that. In my experience, I’ve not been too impressed with amantadine in irritability, but it is certainly worth trying (Hammond FM et al, J Head Trauma Rehabil 2014;29(5):391–399; Hammond FM et al, J Neurotrauma 2015;32(16):1230–1238).

TCPR: What about antipsychotics for irritability?
Dr. Silver: They could be useful if the irritability is due to mania or a psychotic condition, but there are actually no controlled trials of antipsychotics in TBI. It is important to rule out medications and substances that could be contributing to irritability in TBI, like alcohol, benzos, opioids, or steroids. Interestingly, the psychostimulants do not make irritability worse in TBI, but they don’t improve it either.

TCPR: What lifestyle advice do you give to these patients?
Dr. Silver: The best things that patients with TBI can do are diet, sleep, and exercise. I’ll add mindfulness and meditation to that list. All those are good for your brain. Exercise helps recovery after mild TBI, and there are good studies showing that. The worst advice is to rest after a brain injury. Patients may need to reduce their workload and activity for a few days, but strict rest worsens the outcome (Thomas DG et al, Pediatrics 2015;135(2):213–223). They need to keep moving—doing so helps the brain recover.