How high should we go when dosing antipsychotics in schizophrenia? Surprisingly little is known about optimal doses. During drug development, dosing is estimated from animal studies, but more detailed studies in humans are rare. A recent meta-analysis of 68 studies examined dose-response relationships in randomized controlled trials of antipsychotic medications for schizophrenia and schizoaffective disorder. The outcome of interest was the dose producing a 95% reduction in symptoms (ED95).

For many medications, the ED95 dose differed greatly from the FDA-recommended maximum. For example, aripiprazole’s ED95 was 11.5 mg/day, in contrast to the 30 mg/day maximum licensed dose. For numerous medications, including olanzapine (for positive symptoms), clozapine, and lurasidone, the dose response curves did not plateau, implying that dose escalation beyond the ED95 may still be efficacious. Other medications, such as quetiapine, cariprazine, and brexpiprazole, showed a clear plateau in dose response—implying no extra benefit of further escalation. Several medications showed a bell-shaped dose response curve, including haloperidol, risperidone, olanzapine (for negative symptoms), and aripiprazole, implying a negative response with a higher dose.

CHPR’s Take
For most antipsychotics, the ED95 is slightly lower than the FDA maximum dose. For some commonly used agents, such as aripiprazole and quetiapine, we may be dosing patients more aggressively than needed. Others may need to be tailored to the ­individual. 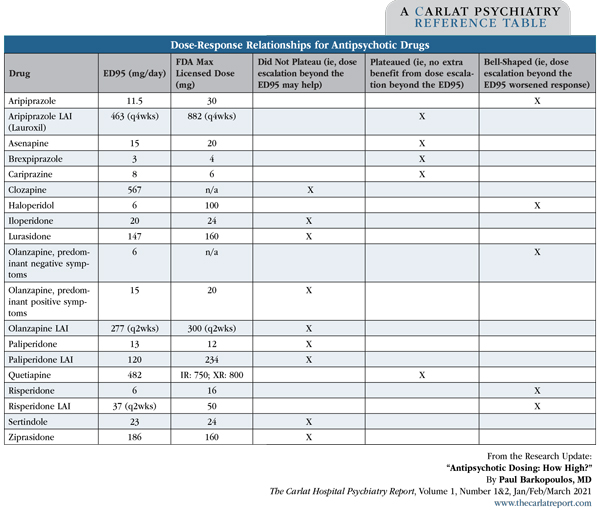