Home » Lunesta, Rozerem, and More: Showtime for the New Hypnotics

Lunesta, Rozerem, and More: Showtime for the New Hypnotics

Daniel Carlat, MD
From The Carlat Psychiatry Report
Issue Links: Editorial Information | PDF of Issue
Daniel Carlat, MD Dr. Carlat has disclosed that he has no significant relationships with or financial interests in any commercial companies pertaining to this educational activity.
Suddenly, putting patients to sleep is all the rage in psychiatry. Over the last year, two new hypnotics have been approved by the FDA – Lunesta (eszopiclone) in December 2004 and Rozerem (ramelteon) in July 2005. Indiplon (the generic name) is on the launching pad for approval in early 2006.

In this article, we will guide you through the Land of Hypnotics, but first, a brief caveat emptor. Not surprisingly, the pharmaceutical industry is pumping millions of dollars into a variety of marketing efforts, but a new technique is so deceptive that it has astonished even the jaded editors of TCR. The “National Sleep Foundation,” billed as an “independent nonprofit organization dedicated to improving public health and safety by achieving understanding of sleep and sleep disorders,” recently released a poll showing that 50% of Americans have insomnia. As it turns out, not only was the “poll” funded entirely by Sepracor, makers of Lunesta, but most of this “nonprofit” foundation’s yearly revenue is provided by drug companies (for all the sordid details, see http://www.sacbee.com/content /news/projects/drugs/story/13132395p-13976434c.html).

Government researchers in the U.S. and the U.K. are trying to counteract some of the hype. Recently, for example, a thorough meta-analysis comparing the hypnotics was published by Britain’s NICE (National Institute for Health and Clinical Excellence).

The authors reviewed 24 randomized controlled trials comparing the three “Z drugs” – zolpidem (Ambien), zaleplon (Sonata), and zopiclone – with each other or with benzodiazepines (BZs). Zopiclone is the racemic parent of Lunesta (eszopiclone), which is the purified S-isomer; zopiclone has been used as a hypnotic in Europe for many years.

The NICE Assessment group’s conclusions? There are no consistent advantages of one drug over another in effectiveness, next day impairment, or risk of withdrawal and dependence (free download is available at http://www.nice.org.uk/ pdf/TA077fullguidance.pdf).

Nonetheless, clinicians on the front line know that there’s more to life than randomized controlled trials, and that subtle but important differences between compounds may not show up in large-scale studies. In the chart and text below we summarize some key variables of the newer hypnotics.

Table: A Comparison of the Newer Hypnotics 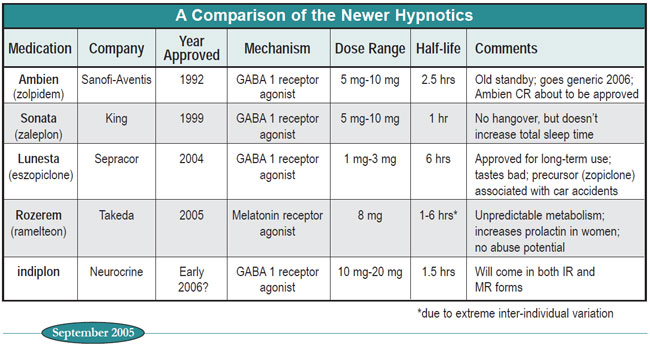 Effectiveness. All the hypnotics get patients to sleep better than placebo, a quality known in the research studies as “reducing sleep latency.” Only Ambien, Lunesta, and indiplon can also claim that they increase total sleep time. Ultra-short half-life Sonata is typically put forth as a drug for middle-of-the-night insomnia, but experienced clinicians know that many patients find it perfectly helpful for initial insomnia, and appreciate its absolute absence of next morning grogginess. Indiplon will be offered in two versions: an IR version that will be essentially identical to Sonata and an MR (modified release) version that will be similar to Ambien and Lunesta. A controlled release version of Ambien will be released soon (Ambien CR) but there would appear to be little clinical rationale for its use. Its usefulness for Sanofi-Aventis is clear--it’s a patent extender, since Ambien IR goes generic in 2006.

Next-day impairment. This is where Sonata really shines, since its one hour half-life ensures that it’s basically out of the system entirely within four hours. One study showed that Ambien leads to more next-day impairment than Sonata (J Clin Psychopharm 2002; 22:576-583). Lunesta, with its particularly long half-life, will probably cause similar impairment, but no comparative studies have been published yet. Its racemic precursor, zopiclone, which shares its pharmacokinetic profile, was associated with more traffic accidents than short-acting BZs in one study (Lancet 1998; 352:1331-1336). We expect that indiplon IR will be as clean as Sonata. Rozerem is a troubling unknown, given the wide inter-individual variability in its metabolism.

Long-term use. Sepracor, when faced with the fact that Lunesta appeared, on paper, to have no advantages over Ambien or Sonata, went about creating a market niche by showing that Lunesta maintained its effectiveness over six months (Sleep 2003; 26:793-799). With this single study, Sepracor managed to gain two things: FDA approval for long-term use and a remarkably effective ad campaign.

As it turns out, both Sonata and Ambien also have data indicating long-term efficacy, but these are open label studies, with no placebo controls. In one Sonata study, for example, 486 elderly patients who had been enrolled in short-term double blind studies were continued in a six to 12 month open-label extension. These patients maintained their improved sleep on all measures (Sleep Med 2005; 6(2):107- 113). Open label studies of Ambien have shown similar long-term efficacy (J Int Med Res 1992; 20:162-170). Word on the street is that indiplon will probably be FDA-approved with a long-term indication. Rozerem apparently has not yet been tested for long-term use.

The bottom-line is that probably all the hypnotics work over the long term, but so far only Lunesta has FDA-sanctioned bragging rights. Sepracor’s lovin’ it!

Abuse Potential. One study asked 297 drug addicts questions about the likelihood that they would abuse a variety of drugs. The most loved were the BZs, and the least loved was Benadryl (diphenhydramine). The non-benzos zopiclone (Lunesta’s mother) and Ambien were considered only “moderately” abusable, in the same category as tricyclic antidepressants (Addiction 2004; 99:165-173).

However, in Lunesta’s “General Summary Letter” (available from Sepracor’s medical affairs department), they report that when they gave Lunesta 6 mg and 12 mg to known BZ abusers, the med produced the same euphoriant effects as Valium 20 mg, and produced both amnesia and hallucinations. In addition, clinicians have reported anecdotal evidence of Ambien abuse, including one published series of eight cases (J Psychopharmacol 2003; 17:131-5.)

The star in this niche appears to be Rozerem, which showed no abuse potential in company-sponsored studies. Because of this, it is the only FDA-approved hypnotic that is not a controlled substance.