Home » The CATIE Trial: The Story is in the Dosing

The CATIE Trial: The Story is in the Dosing

From The Carlat Psychiatry Report
Issue Links: Learning Objectives | Editorial Information | PDF of Issue
Few clinical trials have ever generated as much buzz as the series of trials known as CATIE. CATIE stands for “Clinical Antipsychotic Trials of Intervention Effectiveness,” and is the only set of trials ever done comparing the major second-generation antipsychotics. And because CATIE is funded entirely by NIMH, its results are thought to be quite trustworthy (NEJM 2005;353:1209-1223).

As it turns out, one small aspect of the study received pharmaceutical industry input, and this may have inadvertently corrupted the results of the entire enterprise – but more on this point later!

Here’s how the study was carried out. By the way, don’t skip this methodology section, because CATIE results will continue to emerge over the next several years, and you’ll never be able to adequately evaluate the meaning of these results without a good feel for how the research was conducted. Don’t worry, we’ll make it digestible enough so that you’ll be able to commit it to memory.

At about 50 sites throughout the United States, approximately 1,500 patients with schizophrenia were recruited and were randomly assigned to one of five treatment groups: Geodon, Risperdal, Seroquel, Trilafon, or Zyprexa.

You can see right away that one of the big players, Abilify, was not even included in the trial, because it had not yet been approved for schizophrenia. Given the preliminary results, the makers of Abilify may be thanking the stars for their timing.

Who were the patients participating in the trial? They were pretty much “real world” patients with schizophrenia – the kind that you are likely to see in your own practices. The only exclusion criteria were a diagnosis of schizoaffective disorder and a history of treatment resistance (as measured by a history of severe, ongoing symptoms while undergoing treatment with antipsychotics). Thus, patients were included if they had other DSM-IV disorders, if they were actively abusing substances, and if they were taking other psychiatric medications in addition to antipsychotics.

For ethical reasons, there was no placebo group, but all of the medications were packaged in apparently identical capsules so that neither the patients nor the raters were able to determine which medication subjects were taking. Treating clinicians were told that they could dose the medication from one to four capsules per day, and they were encouraged to increase the dose until there was either a good response or there were side effects.

Just like in real clinics, if clinicians felt that patients weren’t doing well enough or were having intolerable side effects, they could decide to discontinue the study medication and move on to something else. Unlike the real clinical world, however, in this case the “something else” was not the medication of their choice; rather, they offered subjects the option of enrolling in Phase II of the CATIE trial, in which patients were randomly assigned to blinded treatment with another atypical or open treatment with Clozaril. We don’t know the results of Phase II yet; this article covers the results of Phase I.

As in all standard clinical trials in schizophrenia, CATIE outcome measures included the Positive and Negative Syndrome Scale (PANSS) and the Clinical Global Impression (CGI) Scale. Unlike other trials, however, the primary outcome measure was “time to discontinuation,” which is such an unorthodox way to measure efficacy of a drug that it has caused conniption fits among many psychiatrists reading about the study. But let’s take a closer look at how reasonable (or unreasonable) this choice was.

In the real world of our offices, we make decisions about whether to continue prescribing a drug based on two factors: efficacy and tolerability. In most research studies, on the other hand, the emphasis is on efficacy. To take the example of Seroquel, for example, we might find that a patient reports reduced hallucinations but complains of profound sedation while taking it. Many of us would respond by discontinuing Seroquel and prescribing something else, and this is precisely the kind of latitude that the CATIE researchers were given.

The crucial question is this: how does this discontinuation make the drug look when the results of the research are analyzed and published? If the outcome is the PANSS, Seroquel looks pretty good – the patient’s core symptoms were improved at the time the drug was discontinued, and this improved PANSS score will make it into the study’s conclusions. However, if the outcome is “time to discontinuation,” Seroquel looks bad, because it was discontinued early in the trial (we’re only using Seroquel as an example – it’s a great drug, and it did fine in the CATIE trial!).

CATIE’s authors reasonably argue that “time to discontinuation” is the best measure of overall medication effectiveness, because it integrates judgments of efficacy and tolerability into a global measure.

So here are the main findings of the CATIE trial (you need to review both tables in this article as you read these findings):

1. In terms of time to discontinuation, Zyprexa looks a lot better than its peers, with the average patient remaining on it for over 9 months, versus the other drugs, which were discontinued from 3.5 to 5.6 months after the study began. This difference was statistically significant with respect to most of the other drugs. Zyprexa also outperformed its competitors on PANSS and CGI, although these differences decreased over time.

2. Zyprexa caused the worst side effect profile, with an average of 2 lbs weight gain per month and various other metabolic havoc.

3. Trilafon seems to be as effective as all of the atypicals except Zyprexa (based on discontinuation time and PANSS scores), a finding that contradicts the notion that atypicals are more effective than typicals. More to the point, and surprisingly, Trilafon didn’t produce significantly higher AIMS scores than the atypicals, implying that this moderate-potency conventional antipsychotic, dosed at around 20 mg QD, is not more likely to lead to TD than its atypical cousins, although a one-year trial may not be long enough to evaluate this issue.

4. Regarding other side effects, CATIE reinforced stuff we already knew, namely, that Risperdal increases prolactin, Geodon is metabolically clean and is safe for the heart despite all of the QT hullabaloo, and Seroquel doesn’t cause cataracts in humans, only in beagles.

Main Results of Phase I of the CATIE Trial 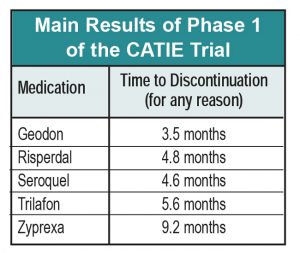 The Dosing Debacle
We wish we could stop with this fairly clean description of CATIE results. Unfortunately, the CATIE methodology went awry when researchers consulted the drug’s manufacturers in deciding what doses to put in each blinded capsule. The result was that each Zyprexa capsule contained a relatively robust dose of 7.5 mg–more potent, relative to the PDR maximum recommended dose, than any of its competitors. So even though dosing was blinded, the super-charged Zyprexa capsules resulted in problems interpreting CATIE.

The most shocking result of the CATIE dosing protocol is that the average Zyprexa dose was higher than the PDR-listed maximum, while the average dose of all its competitors was less than half of the PDR maximum dose. Another way to look at this is that if Zyprexa had been dosed in line with the other drugs, the average dose would have been only 9 mg QD. To put it mildly, the study’s results would have looked very different with Zyprexa at that dose.

Of course, it’s possible that the high average Zyprexa dose used in CATIE reflects doses generally used by real-world psychiatrists. But according to data from IMS Health, the average Zyprexa dose prescribed by American psychiatrists during the CATIE study period was 14 mg QD, 6 mg less than the CATIE dose. The only other drug averaging a CATIE dose higher than the U.S. practitioner average was Seroquel, a medication acknowledged to be severely underdosed by practitioners because of problems with sedation.

The bottom line is that a strong case can be made that Zyprexa’s apparent efficacy advantage in the CATIE trial is merely an artifact of the way it was dosed relative to the other medications. Either Zyprexa was overdosed, or its competitors were underdosed.

On the other hand, defenders of Zyprexa can well argue that one would have expected it to be discontinued earlier than the other drugs because of the weight gain it causes, and the fact that clinicians and patients stuck with it for so long despite this side effect means that Zyprexa really does have something special going for it. There’s no clear answer here.

Nonetheless, we applaud the idea of a head-to-head, real-world patient comparison, and many of the CATIE Phase 1 results are of real value for psychiatrists. We look forward to more clinical tidbits as Phase 2 and 3 results emerge.

SUBSCRIBE NOW
Table Of Contents
The CATIE Trial: The Story is in the Dosing
Typical Antipsychotics: A Brief Review
Background of the CATIE Trial
What is an “atypical”?
DOWNLOAD NOW
Featured Book
Featured Video
Featured Podcast
Recommended