Timothy W. Lineberry, MD
From The Carlat Psychiatry Report
Issue Links: Learning Objectives | Editorial Information | PDF of Issue
Timothy W. Lineberry, MD Associate professor of psychiatry, Mayo Clinic Dr. Lineberry has disclosed that he has no relevant relationships or financial interests in any commercial company pertaining to this educational activity.
Assessing a patient’s risk of suicide is one of the most common, yet challenging, exercises for the psychiatrist. You’re probably familiar with the known risk factors. These include male sex, past suicide attempt(s), family history of suicide, and being divorced, unemployed, or older. Although these particular factors may clearly identify groups at risk, you can’t do anything to change them. As such, they tend to be of minimal use when you are making decisions about how to manage suicide risk in a patient in your office.

The intent of this article is to provide some direct, usable interventions to improve your management of suicide risk. Here are seven clinical pearls based on emerging evidence that can be useful in your daily practice. To help you remember and translate them, each is linked with a theme.

It’s unclear whether there is a specific sleep problem associated with suicide/suicide attempts. In practice, however, global sleep problems can be identified and treated. Fortunately, patients generally feel no difficulty or stigma describing their problems with sleep. This may be critically important in young men who may be less willing, or able, to describe depressive and anxiety symptoms or thoughts of suicide. A focus on sleep assessment and treatment can also be a point of entry for fleshing out other syndromes.

2. High Anxiety
Agitation and anxiety are critical risk factors in suicidal ideation and suicide attempts that must be addressed. Recent population-level research (Nock MK et al, PLoS Med 2009;6(8):e1000123) indicates that anxiety or agitation can mediate the change from thinking about suicide to acting on those thoughts. Anxiety disorders are also strongly associated with suicide (Nock MK et al, Mol Psychiatry 2010;15(8):868–876). And in a study of 76 patients who committed suicide while hospitalized or shortly after discharge, 79% reported “severe or extreme” anxiety or agitation, while only 22% endorsed suicidal ideation when last asked about this (Busch KA et al, J Clin Psych 2003;64(1):14–19).

Anxiety and agitation have purposely been placed together. Such symptoms may not be obvious on exam. It is not unusual, for instance, for a patient who does not appear anxious to endorse profound internal anxiety/agitation. Also, there are no scales to define the particular state of internal restlessness/anxiety/agitation that individuals commonly report. However, from a suicide risk assessment perspective, it’s important for you to follow this symptom over time in your patients through careful clinical interview.

Asking questions such as, “Do you feel like you’re crawling out of your skin?” and “Do you feel like you are going to explode?” may be helpful in identifying, and naming for patients, a key symptom in suicidal states. Distinct from akathisia, this agitation (sometimes described as psychache or anguish) drives a need to take action to resolve the internal state. Similar to akathisia, there may be motoric symptoms that can be observed on exam; however, this is not always the case. Prompt treatment of anxiety or agitation with benzodiazepines or antipsychotics can be potentially life-saving in a crisis. Consider increasing your patient’s observation level on inpatient units until the symptom is well controlled.

3. Danger, Will Robinson
Though the actual risk associated with antidepressants in suicide has probably been overstated and misapplied, it is now a part of the patient’s and physician’s canon. After almost a decade of research, the following key principles are most relevant. First, adolescents and young adults are the group at greatest risk for suicidal ideation and are the basis for the FDA’s revised black-box warning (see table), issued in 2009. For those 25 or over, the risk is the same with antidepressants versus placebo. For older adults, treatment with antidepressants appears to decrease suicidality. Nonetheless, regardless of age, it is important to keep in mind periods when risk might be greater. These include the initiation of antidepressants, the period after changes in dose (both increases and decreases), and after antidepressant discontinuation. With this in mind, tailor your informed consent with patients to address these particular points in time/risk. 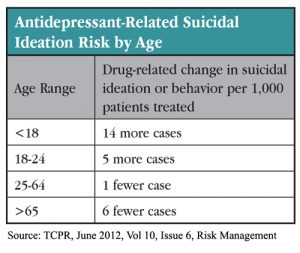 4. The Safety Dance
A suicide attempt with a firearm is 90% fatal, while other methods are far less lethal. Although guns are a hot-button issue politically, there is little controversy related to their role in suicide in those with psychiatric illness. According to some research, more than half of completed suicides are by gun (Miller M and Hemenway D, N Engl J Med 2008; 359:989–991). In fact, more gun deaths are the result of suicide (close to 19,000 in 2009) than homicide (about 11,500 in the same time period).
Clinically, there are very clear reasons for asking about access to firearms in patients who are depressed, misusing substances, suicidal, or a combination of these. The APA guidelines and expert guidance are very black and white about the need for identification of access to firearms and their subsequent removal (Simon RI, Suicide Life Threat Behav 2007;37(5):518–526). Practical matters, however, often introduce many gray areas. It’s important, therefore, to look for opportunities to build a shared understanding with your patients, and their families, of reducing firearm access, should that be necessary.

One way to do this is to systematically ask about access at the time of a patient’s initial assessment and options for safe storage or removal of firearms. Another is to use a pragmatic intervention such as a “means restriction receipt,” a signed receipt by the patient stating they have removed potential means for suicide (Bryan CJ, Profes Psychology: Res Pract 2011;42(5):339–346). This has been very effective in promoting dialogue and action in patients, and could be used not just for firearms but for supplies of medications or other potential suicide methods.

5. Replace It With a Dimmer Switch
Often, clinicians and families think of suicide risk as a binary issue: you’re either suicidal or you’re not. To change this conceptualization, try to think of suicide risk as a light with a dimmer switch. Psychosocial triggers, physical pain, decreased sleep, intoxication, or worsening illness—which effectively “turn up the light”—may increase suicide risk and affect one’s behavior, while elimination of these triggers decreases risk.

6. Everybody Needs a Plan
Contracting for safety has no evidence base, and asking a patient to sign a document stating that they will not harm themselves is problematic on multiple levels. They may feel that they can’t talk about being suicidal. They may also ignore their contract when they have actual suicidal intent. Finally, a contract may give the clinical team a false sense of security. However, developing a plan for what to do when patients are suicidal can be helpful.

Safety Planning Intervention (SPI) is a brief intervention to mitigate suicide risk that can be utilized by clinicians or support staff (Stanley B and Brown EJ, Cog Behav Prac 2012;19(2):256–264). Though its efficacy has not been confirmed and clinical trials are ongoing, it is a Suicide Prevention Resource Center/American Foundation for Suicide Prevention best practice. SPI involves patients writing down the signs that they are suicidal, and prioritizing and defining the psychosocial factors they can access to help decrease that risk. It helps patients to define their own internal coping strategies, to identify their social supports and how to contact them, and to determine how to make their environment safer. SPI is widely used in the Veterans Administration and has been extremely well received.

7. It’s a Wrap
Assessment and management of suicide risk obviously demands careful documentation of your assessment and thought process in the medical record. To improve your documentation of suicide risk assessment, consider the dimmer switch example and the fact that people move in and out of suicidal crises. Document when a suicidal crisis has resolved, but also be sure to describe that a chronic risk may remain which can be reactivated/precipitated in the future. Intervene with medication, psychotherapy or other risk-reduction strategies during crises to resolve them, and describe your approach to reducing risk and managing current and future crises.

TCPR Verdict:
Though suicide can’t always be prevented, a careful and pragmatic suicide risk assessment can focus on interventions to decrease suicide risk and improve symptom response. By focusing on sleep, anxiety/agitation, risk reduction strategies, and developing a plan for treatment, you can potentially make a difference in people’s lives and resolve a suicidal crisis.
General Psychiatry
KEYWORDS anxiety disorders forensic psychiatry
Timothy W. Lineberry, MD
More from this author