Faina Novosolov, MD
From The Carlat Psychiatry Report
Issue Links: Learning Objectives | Editorial Information | PDF of Issue
Faina Novosolov, MD Assistant director of clinical services, Women’s Mood and Hormone Clinic, University of California, San Francisco Dr. Novosolov has disclosed that she has no relevant relationships or financial interests in any commercial company pertaining to this educational activity.
A 32-year-old pregnant woman with bipolar disorder, well-controlled on valproic acid (Depakote), comes into your office wanting advice on medications. What do you do? For both psychiatrists and patients, this can be an extremely high anxiety scenario, with concerns about the mother’s—and now her baby’s—well-being.

We know, for instance, that pregnancy itself can substantially increase the risk of recurrence of bipolar symptoms—as high as 71% (with or without treatment)—and stopping medications during pregnancy increases risk twofold compared to continuing them (Viguera AC et al, Am J Psychiatry 2007;164(12):1817–1824). In a case like this, a clinician can begin a conversation by saying: “There’s no one right answer. We know that there are risks to treatment for the baby, but there are also significant risks to no treatment for both of you. Let’s go through the risks and benefits of each so we can decide together what might be the best plan.” This discussion should also include the mother’s partner, if possible, as well as the mother’s obstetrician and outside therapist, to make sure everyone involved is on the same page.

Be aware that mood shifts can happen very quickly with the hormonal variations of pregnancy. Visits with pregnant patients should be monthly at minimum, and sometimes weekly to biweekly during times of mood instability or medication changes. In this article I will discuss some of the most common medications in bipolar disorder, along with suggestions on how to manage them during pregnancy and lactation.

Lithium
Most psychiatrists are wary about using lithium during pregnancy because of the risk of Ebstein’s anomaly, a tricuspid valve malformation. But lithium is actually one of the safest mood stabilizers in pregnancy—much safer than valproic acid. The risk of Ebstein’s anomaly is 1 in 1,000 to 2,000 (0.05% to 0.1%) when using lithium in the first trimester, compared with 1 in 20,000 in the general population. So although there is a large relative risk, the absolute risk is still extremely low (Cohen LS et al, J Am Med Assoc 1994;271(2):146–150). 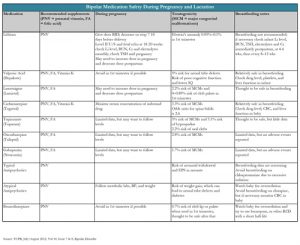 Breastfeeding. Most clinicians don’t recommend breastfeeding on lithium because of the theoretical risk of infant toxicity. However, if a woman chooses to do so, it’s important to check lithium level, thyroid stimulating hormone (TSH), blood urea nitrogen (BUN), electrolytes, and creatinine in the infant immediately postpartum, at four to six weeks of age, and then every eight to 12 weeks for the duration of breastfeeding (Fowler S and Freeman M, Lithium and breastfeeding; http://bit.ly/aCokQC). Any testing of the infant is best done through cooperation with the child’s pediatrician.


Valproic Acid (Depakote)
If possible, valproic acid should be avoided during pregnancy, especially in the first trimester, where it carries up to a 5% risk of neural tube defects. This makes it 50 to 100 times more teratogenic than lithium. Valproic acid is also associated with a two- to seven-fold increased risk of atrial septal defects, hypospadias, cleft palate, polydactyly, and craniosynostosis, and a 12- to 16-fold higher risk for spina bifida (Jentink J et al, N Engl J Med 2010;362:2185–2193). High-dose folic acid (4 mg to 5 mg per day) is often recommended. Even though in one study it didn’t seem to lower the risk of these abnormalities, it did reduce the risk of miscarriage (Robinson GE, Focus 2012; 10(1):3–14). Vitamin K (20 mg per day) is also recommended in the last month of pregnancy for women taking valproic acid or carbamazepine (Tegretol) to avoid bleeding problems in the newborn.

Can valproic acid be restarted after the first trimester? That’s not ideal either, as it can decrease vitamin K levels, and might also result in poorer cognitive function in the child when compared to other antiepileptic-drug monotherapies or no therapy at all (Meador KJ et al, N Engl J Med 2009;360(16):1597–605).

Breastfeeding. Valproic acid is considered relatively safe in breastfeeding, but even the low levels found in breast milk may contribute to liver damage. One questionable case of thrombocytopenia has been reported, so mom or physician should watch the infant for unusual bruising or bleeding. You may also want to check drug levels, platelets, and liver function in the infant.

Lamotrigine (Lamictal)
Lamotrigine looks very promising during pregnancy and breastfeeding and requires little monitoring. Multiple pregnancy registries have found that the overall risk of birth defects associated with first trimester lamotrigine use is 2.2%, well within the baseline rate of 2% to 3% (Robinson ibid). In 2006, the FDA issued a warning about the possibility of cleft palate with first-trimester lamotrigine use, based on one study that estimated the risk as 8.9 in 1,000 (versus a baseline risk of 0.5 to 2.16 in 1,000 in the general population). Later studies, however, found risks of 0.7% and 0.25%, while still another study showed no increased risk at all (Nonacs RM, MGH Center for Women’s Health 2010; http://bit.ly/QXRQ8).

Breastfeeding. Lamotrigine is thought to be fairly safe, with only one reported adverse event, a case of a 16-day-old infant with apnea whose mother was taking lamotrigine at a whopping dose of 850 mg per day. Other studies have found no adverse events. Given these reassuring data, lamotrigine is a good option for breastfeeding, and certainly easier than lithium. We could switch all lithium patients to lamotrigine during breastfeeding, but there are certain scenarios where this might not be a good idea, particularly if mom has done well with lithium in the past and has been stable on lithium throughout the pregnancy, has severe depression or suicidality, or shows signs of mania or hypomania.

Carbamazepine (Tegretol)
Although it’s not used much here in the US, especially during pregnancy, carbamazepine is one of the most widely used antiepileptic drugs in Europe, even among women of childbearing age. Data from a large European database found the risk for major congenital malformations to be 3.3%, only slightly higher than the 2% to 3% baseline risk. Spina bifida was the only specific birth defect significantly associated with carbamazepine monotherapy (Jentink J et al, BMJ 2010;341:c6581).

Breastfeeding. Most infants have had no adverse reactions during breastfeeding, but three cases of hepatic dysfunction have been reported. You may want to monitor infant carbamazepine levels, liver enzymes, and a complete blood count if your patient opts to breastfeed on it.

Topiramate (Topamax)
The data on topiramate looks better than for valproic acid, but worse than for lamotrigine. Topiramate monotherapy carries an overall birth defect risk of 5%; the risk of hypospadias is 5.1% and the risk of oral clefts 2.2%. Birth defects don’t appear to be dose-related, so even a tiny amount could lead to trouble. According to the North American Antiepileptic Drug Pregnancy Registry, the birth defect risk is 2.8 times that of the general population (Robinson GE op.cit), prompting the FDA to change topiramate’s pregnancy classification to category D.

Breastfeeding. There are very little data on breastfeeding, but based on one small observational study, infants had very low topiramate concentrations and had no adverse effects (Ohman I et al, Epilepsia 2002;43(10):1157–1160).

Antipsychotics
Typical antipsychotics do not appear to be associated with birth defects, but can contribute to neonatal withdrawal and extrapyramidal symptoms that can When trying to pare down a medication regimen for bipolar disorder in pregnancy, stay away from valproic acid, and stick with lamotrigine or an atypical antipsychotic. Lithium isn’t as bad as people make it out to be, but the monitoring can be taxing. And close follow-up—ideally involving the patient’s partner and obstetrician—is valuable. last up to several months.

Atypical antipsychotics do not seem to be associated with birth defects, but the weight gain associated with their use can increase the risk for neural tube defects, hypertension, and gestational diabetes. Therefore, you should try to use the lowest dose necessary and, as always with the atypicals, you should follow metabolic labs, blood pressure, and weight closely throughout pregnancy.

Breastfeeding. Data suggest that both typicals and atypicals are safe during breastfeeding and no long-term effects have been identified with either class (Robinson GE ibid). There is limited data on atypical agents and breastfeeding, but the data we have suggest that excretion into breast milk is minimal and adverse events are rare.

With clozapine (Clozaril), patients should avoid breastfeeding because of the potential risk of agranulocytosis or seizures in the baby. Breastfeeding on chlorpromazine (Thorazine) should also be avoided due to the risk of drowsiness in the baby probably due to its long half-life (Winans EA, J Hum Lact 2001;17(4)344–347). In both cases, if you determine that staying on that particular medication is in the best interest of the mother, bottle-feeding may be the best choice.

Benzodiazepines
First-trimester benzodiazepine use has been associated with a very small (0.7%) increased risk of cleft lip and palate. However, it is fine to use them in the second and third trimesters and during breastfeeding (Nonacs RM, MGH Center for Women’s Health 2007; http://bit.ly/JCXg5u). There have been some reports of baby withdrawal or over-sedation with these medications, but such symptoms are usually mild and self-limiting.

Breastfeeding. Lorazepam (Ativan) has a shorter half-life than other benzodiazepines and there is less risk of it building up in the baby and potentially causing lethargy.
TCPR Verdict:
When trying to pare down a medication regimen for bipolar disorder in pregnancy, stay away from valproic acid, and stick with lamotrigine or an atypical antipsychotic. Lithium isn’t as bad as people make it out to be, but the monitoring can be taxing. And close follow-up—ideally involving the patient’s partner and obstetrician—is valuable.
General Psychiatry
KEYWORDS bipolar_disorder
Faina Novosolov, MD

PMS and PMDD: Mood Changes During the Menstrual Cycle