Home » An Ethical Perspective on the Affordable Care Act

An Ethical Perspective on the Affordable Care Act

Rebecca Twersky-Kengmana, MD
From The Carlat Psychiatry Report
Issue Links: Learning Objectives | Editorial Information | PDF of Issue
Rebecca Twersky-Kengmana, MD Psychiatrist in private practice, New York, NY Dr. Twersky-Kengmana has disclosed that she has no relevant relationships or financial interests in any commercial company pertaining to this educational activity.
The mission of the Patient Protection and Affordable Care Act (PPACA), commonly referred to as “the ACA” or “Obamacare,” is to secure health care for all US citizens, regardless of age, gender, race, medical history, or socioeconomic status.

Provisions of the ACA, originally approved in 2010, are set to take effect by 2020, and generally fall into two categories: increasing access to healthcare (by mandating insurance coverage), and improving the quality and efficiency of health care delivery. 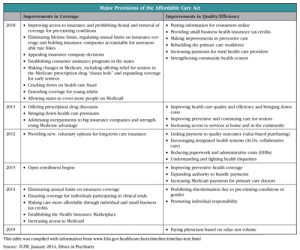 This article will present ethical considerations of the ACA for psychiatrists. For the most part, ethical dilemmas for psychiatrists will occur in the quality and efficiency improvement category. Particular areas of concern are new innovations to improve quality and bring down costs, integrated health systems, linking payments to quality outcomes, payment bundling, and paying physicians based on value rather than volume. Let’s look at the potential ethical issues posed to psychiatry by each of these initiatives.

Some of the potential ethical pitfalls of the ACA are highlighted in the Collaborative Care Model, a type of integrated health system developed by Wayne Katon and Jürgen Unützer at the University of Washington.

In this model, patients are screened for psychiatric illness in a primary-care setting, using simple rating scales. If the screen is positive, they are referred to a care manager, usually an MSW or other behavioral health provider, who oversees their psychiatric care. The care manager is, in turn, supervised by a psychiatrist, who reviews cases at regular intervals, but does not see the patients except under unusual circumstances. Patient progress is measured by rating scales until clinical goals are achieved, and providers are reimbursed based on clinical outcomes. (For an overview, see Moran M. Integrated-Care Models Increase Psychiatrists’ Impact. Psychiatric News. November 2, 2012.)

There have been some reports of success with this model. A study by Katon and his colleagues examined 214 participants with poorly controlled diabetes, coronary heart disease, or both, as well as coexisting depression, and randomized them to usual care or to collaborative care management by a medically supervised nurse. The collaborative care intervention included motivational interviewing and medication, either citalopram (Celexa) or buproprion (Wellbutrin). At 12 months, patients receiving this intervention had a significant improvement in scores on the SCL-20 depression scale alone (difference, 0.40 points, P<0.001), but not in other individual outcome measures, including hemoglobin (HgbA1C), LDL cholesterol, and systolic BP (Katon WG et al, NEJM 2010;363(27):2611–2620).

Despite the intuitive appeal of the collaborative care model (see also the Expert Q&A in TCPR, Nov 2012) and its occasional successes, it poses numerous ethical questions. The ethical principle of “justice” (equal treatment for all) is obeyed, because it provides access to psychiatric care to many more patients than could be seen individually by psychiatrists—particularly in underserved communities. But whether this is for the good of the patient (beneficence), or even if it meets the principle of “do no harm” (non-maleficence), needs to be considered, because care may be provided by individuals with limited training.

In the Katon study, nurses attended only a two-day training course on depression management and behavioral strategies. However, two days may not provide sufficient training; for example, in a 2006 meta-analysis of collaborative care for depression, “effect size was directly related to...the professional background and method of supervision of case managers” (Gilbody S et al, Arch Intern Med 2006;166(21):2314–2321). Furthermore, psychiatric treatment in an integrated setting may be limited to medications, and follow-up to screening questionnaires, possibly conducted via telephone.

What are the ethical implications of overseeing care for many patients who will never be interviewed in person? Are you treating patients or checklist scores? As a psychiatrist, would you be comfortable signing off on such care or assuming the risk involved?

Other models of integrated care exist, such as the Collaborative Medicine and Behavioral Health (CoMeBeh) project at the University of Iowa, in which primary care is provided by physicians rotating through the psychiatry clinic, rather than the other way around. While providing more standard psychiatric care than the Katon model, this model is limited by the fact that it targets a smaller population—those patients already in psychiatric care. (Read more at http://bit.ly/1g5PVZ6.)

There are generally considered to be four cardinal principles of medical ethics:

Ideally, any interaction with, or treatment of, a patient obeys all four principles, but in reality this is often not possible.

Several innovations of the ACA are intended to incentivize doctors not only to provide better quality care, but better quality care at equal or lesser cost—in other words, greater value. However, since a goal of the ACA is universal access to health care, this means that doctors are expected to spend more time with

more patients, while providing better care for each patient at a reduced cost.

Let’s assume for a moment that it is possible to get more for less. How does one go about implementing these innovations? How is value measured? And what ethical quagmires might we encounter in the process? Here are some of the value-based programs.

The Physician Quality Reporting System (PQRS). The PQRS (http://go.cms.gov/1cqJQWm) was designed by the Centers for Medicare and Medicaid Services (CMS) as a way to improve the quality of care of Medicare beneficiaries by tracking practice patterns and providing incentive payments. It was implemented on a voluntary basis in 2007, but beginning in 2015, any Medicare provider who does not satisfactorily report data will suffer a “payment adjustment”—a euphemism for pay cut.

One example of a measure pertinent to psychiatry is PQRS #9, which falls into the “effective clinical care” domain (http://go.cms.gov/1ev2vjp).


Antidepressant Medication Management: Percentage of patients 18 years of age and older who were diagnosed with major depression, and who remained on antidepressant medication treatment. Two rates are reported:

This particular “quality” measure has nothing to do with whether patients recover from their depressive episode. Instead, it incentivizes providers according to how long patients continue taking their meds.

Other Value-Based Provisions of the ACA.

Leaving aside questions about quality and efficiency, the ACA’s goal of health insurance for all presents its own ethical dilemma. As many observers have pointed out, “health insurance” does not necessarily mean “health care.”

With increased insurance coverage, there is likely to be a discrepancy between the number of patients seeking treatment and the number of practitioners who will accept their insurance. A recent study notes that psychiatrists are significantly less likely than physicians in other specialties to accept private, non-capitated insurance (55.3% vs. 88.7%, respectively), Medicare (54.8% vs. 86.1%), or Medicaid (43.1% vs. 73.0%) (Bishop et al, JAMA Psychiatry 2014;online ahead of print).

The reasons for the discrepancy are unclear. The authors point out that while reimbursement rates for office-based psychiatric visits are similar to those for other office-based treatment, psychiatrists don’t see as many patients per day as physicians from other specialties, resulting in less income for those who accept insurance.

Another possibility is the fact that there are more psychiatrists than doctors from other specialties in solo practice (60.1% v. 33.1%). Solo practices require less infrastructure than larger practices, so there is less motivation to hire staff to interact with insurance companies.

The article also cites a 14% decline in the number of graduates of psychiatry training programs between 2000 and 2008, and an aging workforce, as reasons the demand for psychiatrists exceeds the supply and allows psychiatrists not to accept insurance.

This is an ethical conundrum. Do we, as physicians, have a moral obligation to accept insurance, even if we lose income as a result? Or is it more ethical to provide higher-quality care (ie, care that is free from the limitations of insurance and government mandates), even if it comes at a greater cost to the patient?

The ACA has taken on the challenge of guaranteeing affordable and quality health care for all Americans. This is a noble undertaking, with vast challenges, and unpredictable ramifications, including ethical dilemmas for doctors.

TCPR’s Verdict: In an effort to solve our nation’s health care problems, the ACA may inadvertently create ethical dilemmas for providers. Perhaps we can use these as opportunities to re-examine our values, as well as the reasons we chose to become health care providers in the first place. It does appear that with the ACA, doctors will need to walk an ethical tightrope to continue to provide good patient care.

I’m a Psychoanalyst—and Here’s Why I Love It