Home » Cannabis and the Endocannabinoid System

Cannabis and the Endocannabinoid System

Simultaneously, as the use of marijuana has increased in recent years, the perceived risk from smoking marijuana has decreased (Johnston LD et al. Monitoring the Future national survey results on drug use, 1975–2012: Volume I, Secondary school students. Ann Arbor: Institute for Social Research, The University of Michigan;2013). Considering the increased efforts to legalize marijuana in many states, greater public awareness of marijuana and its potential medicinal uses, and new research on cannabis and its constituents, it is essential that psychiatrists understand some of its proposed benefits—and fundamental risks.

Marijuana is derived from the flowers and surrounding leaves of the Cannabis sativa plant. The psychoactive effects are experienced almost immediately after consuming it (usually by smoking or oral ingestion), peak in about 30 minutes, and diminish in about four hours.

Cannabis use has also been associated with impairments in ability to focus, loss of coordination, and heightened body awareness (Campbell FA et al, BMJ 2001;323(7303):13–16). These effects may persist for weeks to months after discontinuing the use of cannabis, especially in heavy and frequent users (Gonzalez R, Neuropsychol Rev 2007;17(3):347–361).

Young brains appear to be especially sensitive to the effects of cannabis. Cannabis use increases the risk of developing poor overall mental health, depression, anxiety, attention difficulties, poor school performance, and other substance use. (Yes, there appears to be real evidence for the ‘gateway drug’ phenomenon [Oltheus JV et al, Drug Alcohol Rev 2013;32(1):67–71]).

The risk is higher in females, heavy users, and those with early age of first use (van Gastel WA et al, Community Ment Health J 2014;online ahead of print). A recent longitudinal study demonstrated that persistent cannabis use was associated with significant decline in IQ and global neuropsychological functioning, particularly in adolescent-onset (vs adult-onset) and chronic users, even after controlling for other substance use and years of education (Meier MH et al, Proc Natl Acad Sci USA 2012;109(40):E2657–E2664).

Several large-scale studies have also reported that adolescent cannabis users have an increased incidence of schizophrenia later in life, with heavier use associated with increased risk (Manrique-Garcia E, Psychol Med 2012;42(6):1321–1328). While the mechanism of this effect has yet to be determined, it appears that cannabis may precipitate the onset of psychosis in individuals who have a genetic or developmental vulnerability (Degenhardt L et al, Drug Alcohol Depend 2003;71(1):37–48).

The Cannabis sativa plant has been found to have over 500 chemical constituents, of which 85 are cannabinoids, ie, compounds that act on cannabinoid receptors.

The most psychoactive constituent of cannabis is delta-9 tetrahydrocannabinol (THC). Concentrations of THC in marijuana have been steadily rising over the years. According to the University of Mississippi’s Potency Monitoring Project, THC concentrations in samples of marijuana have risen from 1%–2% in the 1960s to an average of 9% today (see for example Mehmedic Z et al, J Forensic Sci 2010;55(5):1209–1217). A typical marijuana cigarette (“joint”) contains about 20 mg of THC derived from one gram of leaves and buds of the C. sativa plant.

THC may cause euphoria by inhibiting the release of neurotransmitters like GABA and glutamate. The effects may be biphasic, as higher doses of THC appear to increase anxiety and paranoia, presumably by increasing dopamine release (Mechoulam R & Parker LA, Annu Rev Psychol 2013;64:21–47). Most regular cannabis users can titrate the level of psychotropic effect to provide the outcome they desire, even though this “self-adjustment” of dose is in contrast to most of modern medicine, in which doses are determined by a prescriber.

Another cannabinoid that has received much attention in recent literature is cannabidiol (CBD), which is known to have anti-emetic, anti-inflammatory, and antipsychotic effects (Bergamaschi MM et al, Curr Drug Saf 2011;6(4):237–249), as well as possible neuroprotective and anxiolytic properties. It may act as a protective factor against the detrimental psychological effects of THC. Cannabis plants modified to have a high CBD:THC ratio may be useful for therapeutic purposes.

Cannabinoids bind to cannabinoid receptors in the body. First identified in 1990, two types of cannabinoid receptors (CB1 and CB2) have been characterized, both of which are G-protein coupled receptors. CB1 receptors are responsible for the psychoactive effects of THC and are widely distributed throughout the central nervous system and the gut.

Interestingly, the low concentration of CB1 receptors in the brainstem accounts for the relative safety of marijuana; a lethal overdose of marijuana in humans has never been reported (Bostwick JM, Mayo Clin Proc 2012;87(2):172–186). 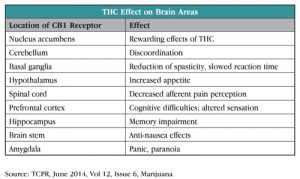 CB2 receptors are primarily found in the immune system, where they are involved in regulating inflammation, pain perception, and host defense.

The ECS plays an important role in the process of neurogenesis. One hypothesis suggests that THC may cause overstimulation of the ECS, especially in adolescent brains, thus disrupting the process of neuronal development and causing psychiatric disturbances. The ECS also moderates the activation of hypothalamic-pituitary-adrenal axis. Chronic stress can lead to down-regulation of cannabinoid receptors, thus leading to symptoms of anxiety and depression.

Some research hints that the ECS may play an important role in the inhibition of aversively motivated learning, and could be a useful target for treatment of PTSD. Other endocannabinoids similar to anandamide have been identified, and appear to protect the brain during trauma and stroke via vasodilation, anti-inflammatory, and analgesic actions (Mechoulam R & Parker LA, op.cit).

Because most drugs of abuse elevate brain levels of endocannabinoids, blockade of CB1 receptors may eliminate or reduce the rewarding properties of some addictive substances. This is the rationale of rimonabant, a CB1 antagonist which showed some efficacy in treating nicotine and marijuana addiction, as well as obesity.

Rimonabant was never approved in the US; it was withdrawn from the European market in 2008 because of psychiatric side effects, including depression and anxiety. Research into CB1 neutral antagonists, which permit constitutive CB1R activity but block excess CB1 activation (like rimonabant), is ongoing.

Cannabis has been used for medicinal purposes throughout the world for at least the past five millennia. It was used extensively in Western medicine during the late nineteenth century, but went into decline after potent synthetic medications were introduced in the early twentieth century and marijuana was vilified in the popular media, eg, in the movie Reefer Madness, an anti-marijuana propaganda film released in the late 1930s.

Some proponents of medical cannabis exclusively advocate the use of the plant (“botanic cannabis”) and the cultivation of strains that are effective for certain ailments. Unfortunately, federal regulations, such as the classification of THC as a schedule I controlled substance, as well as the rapid and largely unscientific promulgation of medical marijuana nationwide—what some have called “medicine by popular vote” (Bostwick, op.cit)—have resulted in a dearth of good scientific evidence on the putative medicinal benefits of smoked marijuana.

Academic and commercial laboratories have developed a handful of pharmaceutical compounds based on THC and other components of the cannabis plant. Three cannabis-derived chemicals have been approved for human use: dronabinol (Marinol), nabilone (Cesamet), and nabiximols (Sativex).

Dronabinol (schedule III) is synthetic THC and lasts for six hours, while nabilone (schedule II) is a THC analog with a 12-hour duration of action. Both have been approved since 1985 for chemotherapy-induced nausea and vomiting and the AIDS-related anorexia/cachexia syndrome. While effective, some naïve users are susceptible to adverse effects such as euphoria, drowsiness, and cognitive clouding, due to variable absorption and first-pass kinetics. As a result, chemotherapy-related nausea and emesis are more commonly treated with serotonergic agents like ondansetron (Zofran), and THC is best reserved for resistant cases (Turcotte D et al, Expert Opin Pharmacother 2010;11(1):17–31).

Clinical studies have shown efficacy of synthetic THC in the treatment of neuropathic (but not nociceptive) pain, refractory cancer pain, and glaucoma, by reducing intraocular pressure. Interest has also arisen in the anti-inflammatory properties of THC, for disorders such as rheumatoid arthritis, and for epilepsy and post-stroke neuroprotection.

Nabiximols (Sativex) is a plant-derived oromucosal spray containing 2.7 mg THC and 2.5 mg CBD per dose. It has been approved in Europe since 2010 for the treatment of moderate to severe spasticity associated with multiple sclerosis. As with THC, trials have shown efficacy of nabiximols for the management of pain, nausea, and AIDS-related anorexia, but not without frequent side effects like dizziness, sedation, and “thinking abnormalities” (Robson PJ, Drug Test Analysis 2014;6(1-2):24–30).

No cannabinoid drug has been approved for any psychiatric indication, and the effects of THC seem too unpredictable to assure any consistent therapeutic response. However, as mentioned earlier, the antipsychotic effects of CBD have been demonstrated in animals and in humans, and supported by functional MRI studies.

In a double-blind trial of 42 patients with schizophrenia, CBD showed comparable results to the antipsychotic amisulpride (Leweke FM et al, Transl Psychiatry 2012;2:e94). It is plausible that CBD-containing agents (which do not act on the dopamine system) may emerge as adjunctive medications to existing antipsychotics.

CBD may also block a process called “reconsolidation,” in which memories of stressful life events are strengthened by brief exposure to conditioned stimuli, suggesting a potential use in PTSD (Stern CAJ et al, Neuropsychopharmacol 2012;37:2132–2142). There are several case reports and small trials of CBD improving seizures in patients with treatment refractory epilepsy, although the mechanism is unknown (Robson, op.cit). CBD has also shown to improve memory loss in animal studies and is being explored as a potential treatment for Alzheimer’s disease, alcohol-induced neurotoxicity, and migraines (Russo E & Guy GW, Medical Hypotheses 2006;66:234–246).

TCPR’s Verdict: Claims for the therapeutic use of marijuana are numerous, but the adverse effects of marijuana consumption—especially in young adults—are many, and the evidence base is, at present, relatively weak. That said, the human endocannabinoid system is widespread and involved in the regulation of several physiological mechanisms. Targeted pharmacotherapies based on specific compounds found in cannabis may usher in a new paradigm in the treatment of psychiatric and other illnesses.
General Psychiatry
KEYWORDS substance-abuse understanding_psychiatric_research
Tisa Adkinson, DO
More from this author
Pavan Madan, MD