Mania gets more attention, perhaps because it presents so dramatically. Imagine two bipolar patients in an emergency room: one withdrawn and depressed, sitting quietly, and another ranting and pacing the room. Which one would be seen first?

This discrepancy is also seen in the FDA-approved medications for acute treatment in bipolar disorder, 10 of which are approved for mania, and three for depressive episodes. 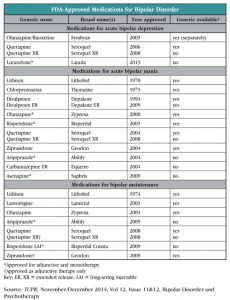 Additionally, depression causes at least as much—if not more—morbidity and impact on quality of life as does mania (Vojtca C et al, Compr Psychiatry 2001;42(3):190–195). A 20-year prospective study by researcher Lewis L. Judd and his colleagues found that even subsyndromal depressive episodes cause substantial disability, while on the other side of the spectrum hypomania causes very little (Judd LL et al, Arch Gen Psychiatry 2005;62(12):1322–1330).

A Closer Look at Bipolar Depression

DSM-5 uses the same criteria for defining a bipolar depressive episode as it does for a unipolar depressive episode. Patients must have at least five of the following nine symptoms over two weeks: depressed mood, anhedonia, weight or appetite change, change in sleep, psychomotor agitation or retardation, fatigue, worthlessness or guilt, indecisiveness or trouble concentrating, and/or suicidal ideation.

Clinically, does bipolar depression differ from unipolar depression? That is a controversial topic, but the short answer is “a little.” There is general agreement that depressive episodes likely occur earlier and more frequently, and involve more psychomotor slowing in bipolar disorder than they do in unipolar recurrent depression (Mitchell PB et al, Br J Psychiatry 2011;199(4):303–309; Cuellar AK et al, Clin Psychol Rev 2005;25(3):307–339). However, other distinguishing features of bipolar depression that have been proposed—eg, worse concentration, more incidence of psychosis, more insomnia, or more hypersomnia—have not been consistently replicated. Interestingly, both types of depression appear essentially the same on functional brain imaging (Cuellar AK et al, op.cit).

In general, instead of simply exploring current symptoms when seeing a depressed patient for the first time, it’s useful to get a very careful personal and family history of potential mania, as most experts propose that a positive family history is suggestive of bipolarity. (For ideas about how to elicit a personal history of mania, see our interview with Ross J. Baldessarini, MD [TCPR, January 2011], the article by Descartes Li, MD [TCPR, July/August 2012], and this month’s interview with Claudia Baldassano, MD.) When asking about family members, the Family History Screen, which collects information on 15 psychiatric disorders and suicidal behavior in patients and their first-degree relatives, can be a helpful tool (Weissman MM et al, Arch Gen Psychiatry 2000;57(7):675–682).

Once we suspect that the depressive episode is a component of bipolar disorder, what are the treatment options? While there are several psychotherapeutic approaches that can be helpful here, in this article we’ll focus on medications.

Pharmacologically, the FDA has split its indications for bipolar disorder into three categories: acute manic episodes, acute depressive episodes, and maintenance treatment. The medications approved at this time for acute bipolar depressive episodes are quetiapine (Seroquel), the combination of fluoxetine and olanzapine (Symbyax), and, as of 2013, lurasidone (Latuda).

Quetiapine. The immediate-release formulation of quetiapine was approved by the FDA for bipolar depression in 2006, and approval of the XR formulation followed two years later. The approval was based on several eight-week trials of 300 mg and 600 mg dosages as compared with placebo groups; patients on both doses of active medication scored significantly lower (less depressed) on the Montgomery-Asberg Depression Rating Scale (MADRS).

Longer-term follow up studies of up to two years have shown continued efficacy in maintenance treatment of bipolar disorder, although it was not used as monotherapy (see Chiesa A et al, Int Clin Psychopharmacol 2012;27(2):76–90 for a good review). Most long-term studies compared quetiapine plus a mood stabilizer to placebo plus a mood stabilizer. Quetiapine can cause somnolence, substantial weight gain, and lipid and glucose abnormalities, which should make us think twice before committing a patient to long-term treatment. You’ll need to do regular metabolic screening of such patients.


Symbyax—one of the first drugs in a trend of packaging two drugs together in one pill to create a new patented medication—was first approved in 2003 as treatment for bipolar depression. It is a combination of fluoxetine and olanzapine. Again, the approval was based on short (eight-week) trials, with comparisons only to placebo, and not to other medications. Despite its FDA approval, Symbyax is rarely used (when was the last time you prescribed it?), for several reasons. A pill that combines two agents limits our flexibility with dosing. Also, olanzapine can cause mega-weight gain and many psychiatrists try to avoid using it when possible.

Lurasidone, an atypical antipsychotic, is the newest medication to get an FDA nod for bipolar depression. It is approved for both monotherapy and as an adjunct to lithium or valproate (Depakote). The approval was based on two six-week trials, in which patients were given doses ranging from 20 mg to 120 mg and were compared to a placebo control group. Lurasidone has little affinity for the H1 receptor (higher affinity is most often the culprit for weight gain in this category) and appears to have fewer weight-gain and metabolic concerns than other atypical antipsychotics, so it is one of the better choices among atypicals. In a long-term (up to 12 months) study of lurasidone as compared to risperidone (Risperdal) for schizophrenic patients, only about 7% of participants taking lurasidone gained more than 7% of their body weight over the study period, while 13% actually lost at least this amount. Waist circumference decreased and there was no significant change in fasting glucose, HbA1C, or lipids (Citrome L et al, Int Clin Psychopharmacol 2012; 27(3):165–176).

You should know that lurasidone is not yet approved for either acute mania or maintenance treatment, but it is undergoing clinical trials for these purposes. Feedback from some psychiatrists who have used it off-label for these purposes has been generally good. Common side effects include akathisia, nausea, and sedation.

Lithium is an old and effective standby; it works rapidly and is substantially less expensive than the medications listed above, and it’s the only agent discussed here found to substantially decrease risk of suicide. It is listed as first-line treatment for acute bipolar depression in the APA practice guidelines (although these have not been updated since 2002). See our January 2011 issue of TCPR for a primer on the use of lithium, as well as the interview “Diagnosis and Treatment of Bipolar Disorder."

So why is lithium only approved by the FDA for acute mania and bipolar maintenance, not acute depressive episodes? Part of the answer might simply be money. Obtaining FDA approval requires substantial time and effort, almost always invested by the drug’s manufacturer. Because lithium has been a generic medication for many years and because it is already used in bipolar disorder, there is little incentive for anyone to seek approval for a specific indication such as bipolar depression.

In a 1993 review of lithium for bipolar depression, eight of nine placebo controlled studies were positive (Zornberg GL & Pope HG Jr, J Clin Psychopharmacol 1993;13(6):397–408). Since then, there haven’t been many studies of lithium’s utility in bipolar depression.

One negative result of lithium was in the EMBOLDEN I trial (Young AH el al, J Clin Psychiatry 2010;71(2):150–162), in which lithium pretty much tanked for bipolar depression—not only did it perform worse than quetiapine, it also did not separate from placebo on the MADRS. However, note that the study was sponsored by quetiapine’s manufacturer, and the mean serum concentration of lithium was on the low end (0.61 mEq/L), just a hair within the clinically acceptable range of 0.6 to 1.2 mEq/L, and below the concentration that is often needed for efficacy in practice.

Lamotrigine (Lamictal) is a popular choice, primarily because of its lack of side effects relative to other treatments for bipolar disorder, and because, in my experience, it seems to keep people on the “happy” side of the mood spectrum, which is appreciated by patients who feel dulled on traditional mood stabilizers. Although data are mixed for acute bipolar depression, it does appear at least to be good at preventing future episodes, and is FDA-approved for maintenance treatment (Amman B et al, J Psychopharmacol 2011;25(10):1289–1294). However, it appears to have less efficacy for preventing mania. For this reason, I tend to use it only in combination with another mood-stabilizing agent.

Antidepressants. While there is little evidence supporting the use of antidepressants in bipolar depression, they are used quite frequently, particularly as adjuncts to a mood stabilizer. There are two issues that arise in the use of antidepressants in these patients: first, do they precipitate mania, and second, do they work to alleviate depression? The first issue remains controversial. Several studies have demonstrated that bipolar patients taking antidepressants do not switch into mania, but many of these were confounded by the patients taking mood stabilizers at the same time. For instance, the large and well-designed STEP-BD study found that neither bupropion nor paroxetine precipitated mania, although all patients were also on antimanic medication during the trial (Sachs GS et al, N Engl J Med 2007;356(17):1711–1722). Regarding efficacy, the same study showed no benefit of these medications in bipolar depression. That is not to say there are no outlier patients who will still benefit from an antidepressant during a bipolar depressive episode (see, for instance, Gijsman HJ et al, Am J Psychiatry 2004;161(9):1537–1547). However, for most bipolar patients, antidepressants are unlikely to provide much efficacy.

We’ve covered this very involved topic in prior issues of TCPR [see the July/August 2012 issue] and we will surely revisit it sometime soon.

Other Mood Stabilizers and Antipsychotics. Beyond those listed above, many of us have tried other mood stabilizers and atypical antipsychotics to treat our patients with bipolar depression. There is some evidence for valproate as monotherapy, but others are either inadequately studied or yield conflicting results (see Selle V et al, Pharmacopsychiatry 2014; 47(2):43–52 for a meta-analysis and review). Aripiprazole (Abilify) has been effective as an adjunct to a mood stabilizer for minor depressive symptoms in an open-label trial (Schweitzer I et al, Int J Bipolar Disorders 2013;1(1):4) but was not effective as monotherapy for bipolar depression in two placebo-controlled studies (Thase ME et al, J Clin Psychopharm 2008;28(1):13–20).

TCPR’s Verdict: Which meds for bipolar depression? If you’re into FDA approval, lurasidone’s your best choice—you’ll likely avoid the potential metabolic effects of the other approved drugs. Off-label options include lithium and lamotrigine. And while not generally advised by experts or supported by the evidence, antidepressants are still used by many: just be sure to proceed with caution.
General Psychiatry
KEYWORDS bipolar_disorder
Robin Berlin, MD

Update on Medications for PTSD