Home » Before You Write That Prescription: Guidelines for Ordering Lab Tests

Before You Write That Prescription: Guidelines for Ordering Lab Tests

Rajnish Mago, MD
From The Carlat Psychiatry Report
Issue Links: Learning Objectives | Editorial Information | PDF of Issue
Rajnish Mago, MD Director, Mood Disorders Program, Associate Professor of Psychiatry, Thomas Jefferson University Dr. Mago discloses that he has received research grants from Alkermes, Allergan (formerly Forest Laboratories), Genomind, and Takeda, and that he has been a paid consultant to Genomind, Guidepoint Global, Otsuka, and Lundbeck. Dr. Carlat has reviewed this article and found no evidence of bias in this educational activity.
Mental health clinicians often ask for a single, black-and-white answer to the question: Which lab tests should I order before starting this particular medication? Inevitably, the answer is that it depends. However, there are some guidelines that are useful.

When it comes to ordering lab tests, it sometimes feels like we are “damned if we do, and damned if we don’t.” Order too many tests, and you cost the health system money for potentially little gain—and your tests could yield false-positive abnormalities that lead to further unnecessary testing. Order too few tests, and you may miss a genuine problem.

If you want to order the appropriate tests, I recommend that you keep four key factors in mind: 1) Anticipated likelihood of an abnormal result; 2) Cost of the test; 3) Potential seriousness of the abnormality that may be found; and 4) The potential to treat the abnormality, if found.

The probability of an abnormal test—often referred to as the pre-test probability—should influence your decision. If a positive result is extremely unlikely, then ordering a test for everyone will make each positive result expensive—depending on how expensive the test is. In an effort to determine the cost-effectiveness of lab tests, researchers from Spain retrospectively reviewed all lab tests done on 510 patients hospitalized at a psychiatric hospital in Madrid from 2000–2005. By dividing the costs of all tests by the number of abnormal results, they determined the “direct cost” of a given abnormal test (Arce-Cordon R et al, Psychiatr Serv 2007;58(12):1602–1605).

This direct cost (in 2005 dollars) varied considerably among psychiatric inpatients, eg., an abnormal creatinine was only 52 cents, an abnormal GGT (gammaglutamyltransferase) was $2.36, and an abnormal thyroid stimulating hormone (TSH) was $47.40. Whether these costs are acceptable is a judgment call and depends on whether a patient is likely to actually benefit. For example, paying $47.40 for an abnormal TSH may be a bargain if it helps you identify hypothyroidism. Similarly, iron deficiency in a person with restless leg syndrome is a problem that, if identified, can be easily remedied. At the other extreme, ordering a complete blood count for a patient starting mirtazapine is probably not cost-effective, since agranulocytosis is an extremely rare side effect of that antidepressant.

The pre-test probability of an abnormal test results varies with patient characteristics. In general, the literature shows that among psychiatric patients, lab tests are most likely to be valuable in the elderly, the poor, those with a history of substance abuse, and those who are disoriented or otherwise appear to have a mental disorder secondary to another medical condition (Anfinson TJ and Kathol RG, Gen Hosp Psychiatry 1992;14(4):248–257).

Thus, we should keep in mind that any laboratory testing recommendations are a framework of suggestions and not rigid guidelines to be followed unvaryingly.

Reasons to order lab tests in psychiatric patients
Deciding which lab tests to order in a particular situation becomes clearer if we keep in mind why we are ordering the tests. Here are four common reasons why psychiatrists might order labs on their patients.

1. Assess your patient’s general health. While you probably don’t consider yourself to be a primary care physician, you may have patients who rarely, if ever, see any other doctor for regular checkups. One study, for example, found several abnormalities to be surprisingly common among psychiatric inpatients: hepatic impairment (66%), hepatitis B (16%), and HIV (14%) (Lopez-Castroman J et al, Int J Psychiatry Med 2012;44(3):211–224). At least one criterion for metabolic syndrome was met in 68% of these patients! Even if you order labs to evaluate general health status, the person should also be referred to a primary care physician as soon as possible since preventive healthcare goes beyond simply ordering a few laboratory tests. We should also try to establish a simple and regular system to share lab test results with the primary care physician in both directions. 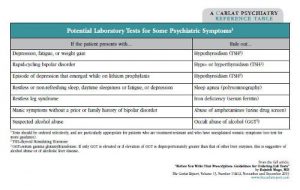 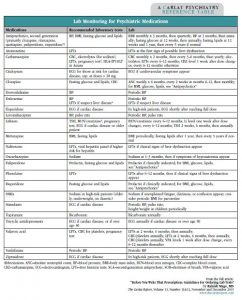 2. Rule out medical or substance use issues that may be contributing to your patient’s symptoms. Some examples of typical tests based on the patient’s presentation can be found in the table “Potential Laboratory Tests for Some Psychiatric Symptoms” (p. 2). While this is not a complete list, these are common scenarios. It’s important to keep in mind that these tests are unlikely to be helpful in most patients you see, particularly if you have an outpatient practice. For example, ordering a TSH for every single one of your patients with depression is not reasonable. However, in patients who have not responded to multiple medication trials, or who have pronounced somatic symptoms, such tests are likely to have a higher yield.

3. Make sure to check if your patient has liver or renal disease, or is pregnant. It is important to ask patients specifically whether they have ever had any liver or kidney disease because these may affect the pharmacokinetics of most medications that we prescribe. If a patient has liver or kidney disease, we should make sure that we have results of hepatic or renal function tests, respectively, done within the previous year. Finally, if there is any chance that the patient may be pregnant, be sure to get a pregnancy test.

4. Get baseline values for things that could go wrong later. The tests that we should run before starting particular medications also depend on what particular adverse effects a medication can cause. (For exceptions to this, see #5: the “Don’t” point.)

Fasting serum glucose and serum sodium are usually done as part of a basic metabolic panel (formerly called a chem 7), and platelet count is done as part of a complete blood count. In the table “Lab Monitoring for Psychiatric Medications” (p. 3), hepatic function tests and serum creatinine are recommended above and beyond general medical evaluation for those medications that are particularly known to cause impairment of liver or kidney function.

Finally:
5. Don’t test for things that are a) exceedingly rare, b) unpredictable, or c) unpreventable due to how rapidly they occur. For example, as noted previously, checking a complete blood count before starting mirtazapine is not required. Agranulocytosis, even if it is associated with mirtazapine (which is debatable), is extremely rare. In any case, it would occur relatively quickly and getting a blood count at baseline and then infrequently would be unlikely to help. Note that while the prescribing information for mirtazapine has a bolded warning about the possibility of agranulocytosis, it does not suggest that we routinely monitor white cell counts. Rather, it only suggests that if a patient on mirtazapine presents with symptoms and signs of infection (eg, sore throat, fever, stomatitis), a white cell count should be obtained. 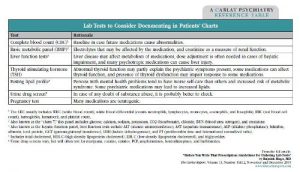 Putting it all together: A practical approach for ordering labs
In our busy practices, we may not have the time to scrutinize each and every potential reason to order individual labs, so it makes sense to have a policy for “routine” screening. This does not mean that you have to be the one to order these tests. In fact, most of these will have already been obtained by primary care doctors. The table “Lab Tests to Consider Documenting in Patients’ Charts” (p. 6) lists the basic screening tests that I like to see in the charts of all of my patients. These, along with the tests recommended based on the specific medication that the patient will take, are recommended as an approach to prudent prescribing without wasteful, unnecessary testing.
General Psychiatry
KEYWORDS laboratory_testing_in_psychiatry news_of_note practice-tools-and-tips psychopharmacology_tips
Rajnish Mago, MD