Daniel Carlat, MD
From The Carlat Psychiatry Report
Issue Links: Learning Objectives | Editorial Information | PDF of Issue
Daniel Carlat, MD Editor-in-Chief, Publisher, The Carlat Report. Dr. Carlat has disclosed that he has no relevant relationships or financial interests in any commercial company pertaining to this educational activity.
On October 1, 2015, you had to start using ICD-10 codes for reporting diagnoses in order to get paid by insurance companies. But what does ICD-10 mean? And how does it relate to DSM-5?

ICD-10 stands for “International Classification of Diseases, 10th edition.” First published in 1900, ICD is a list of diseases in all medical specialties. It has been maintained by the World Health Organization (WHO) for decades, and its purpose is to help all countries agree on how to classify the many ailments that strike our human frames. This system allows nations to speak the same medical language in keeping track of disease prevalence in different parts of the world—knowledge that can be very helpful in puzzling out the causes of diseases.

How are ICD and DSM related? ICD is primarily a list of diseases, and it is not limited to mental health. ICD-10 contains 22 chapters and 68,000 disease codes. One of those chapters, Chapter 5, focuses on mental health. DSM, on the other hand, is a creation of the American Psychiatric Association. It focuses exclusively on mental health and is more than a list of codes—it is also a textbook describing the criteria used to diagnose psychiatric disorders.

Until October 1, we were using DSM codes on our claims to insurance companies. Or so we thought. One surprising piece of news is that those DSM codes were, in actuality, identical to ICD-9 codes. We have been using ICD-9 codes since the publication of DSM-III in 1980.

Just as DSM undergoes periodic updates, so does ICD. ICD-9 was the world’s medical bible from 1978 to 1994, which was when WHO updated ICD-9 to ICD-10. Most European countries adopted the new standard by 2000, but the U.S. health care system was very late to this party. Why? Primarily because ICD-10 is much more complex than its predecessors. ICD-9 included 13,000 disease codes, whereas ICD-10 mushroomed to 68,000 codes. The good news about having all these extra codes is that it allows you to diagnose a condition with greater precision and specificity. The bad news is that the amount of detail can be excruciating. For example, ICD-10 has numerous codes to diagnose injuries sustained by contact with animals, such as getting bitten by pigs or being struck by macaws. That in itself sounds reasonable, as different animals can cause different types of injuries. It’s the drilling down from there that seems excessive. There are 9 different codes for injuries sustained through human-turkey contact: “struck by turkey, initial encounter,” “struck by turkey, subsequent encounter,” “struck by turkey, sequela;” then there’s “pecked by turkey, initial encounter….” You get the idea. 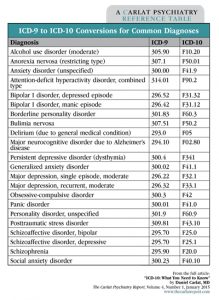 How does ICD-10 affect you?
The ICD-10 switch is, frankly, a non-issue for most psychiatrists. True, we have to say farewell to those trusty old friends engraved in our memory like 296.32 (major depression, recurrent, moderate) and 300.02 (generalized anxiety disorder)—which have been replaced with, respectively, F32.1 and F41.1.

But the DSM-5 makes life easy by listing both the old ICD-9 codes for each disorder, as well as the new ICD-10 codes. If you don’t want to open up your DSM-5 every time you need to look up a code, you can take advantage of many free online resources.

An online converter allows you to type in the ICD-9 code, press enter, and obtain the corresponding ICD-10 code. A more interesting option is found on Dr. Bob’s Virtual En-psych-lopedia, whose tables allow you to search alphabetically for disorders and find out how to convert them from ICD-9 to ICD-10. In that same vein, we’ve included a brief table below, “ICD-9 to ICD-10 Conversions for Common Diagnoses,” that lists some of the more common psychiatric disorders. If you’re using an electronic health record, chances are that the computer software is doing all this automatically for you via drop-down menus.

ICD-10’s time saving secret
At first blush, converting ICD-9 codes to ICD-10 disorders appears to require more precision than we’re used to. For example, ICD-9 allowed you to use a single code for anorexia nervosa (307.51), whereas ICD-10 forces you to specify whether the anorexia is the restricting type (F50.01) or the binge-eating purging type (F50.02). Luckily, those in the know have discovered a hidden section of the codebook allowing you to use “unspecified” for all manner of diagnoses, such as anorexia nervosa, unspecified (F50.00). In fact, there are “unspecified” codes for all the major disorders, such as bipolar disorder, major depression, substance use disorders, and so on. This makes our jobs easier—for example, ICD-10 offers a mind-numbing menu of 22 separate codes for different varieties of bipolar I disorder, depending on whether the most recent episode was depressed, manic, or hypomanic; whether it was mild, moderate, or severe; and with or without psychotic features. You can spend a good chunk of your day choosing the “right” one, or you can go with F31.9: “Bipolar I disorder, unspecified.”

Meanwhile—sorry to alarm you—ICD-11 will be published in 2018. Not to worry, since if history is any indication, the U.S. will take a decade or two to adopt it, giving you plenty of time to get cozy with ICD-10.

(I’d like to gratefully acknowledge Dr. Bruce Black for helping me understand the basics of ICD.)
(For a good primer on ICD-10, go to this APA website.)
General Psychiatry
KEYWORDS dsm practice-tools-and-tips
Daniel Carlat, MD