What is sex addiction?
From Don Juanism to nymphomania, sex addiction has long been recognized among the lay public, but recognition among professionals has been more controversial. For example, while the American Society of Addiction Medicine and the International Classification of Diseases have proposed sex addiction as a medical condition, the American Psychiatric Association has so far refrained from doing so, citing insufficient empirical evidence. However, lack of agreement over clinical conceptualizations doesn’t mean compulsive sexual behaviors aren’t a problem for patients like Alan.

Diagnosing sex addiction
Although highly stigmatized, excessive sexual behavior doesn’t qualify as a disorder until it causes real problems for patients, such as relationship issues, losing one’s job, and getting arrested. As such problems appear, patients will typically start suffering from a variety of psychiatric symptoms, such as anxiety, shame, guilt, depression, and suicidal ideation. Such symptoms are usually what patients present with initially, since few people are eager to disclose their bedroom behaviors at the outset of treatment. Dr. Patrick Carnes developed this list of proposed diagnostic criteria.

What does sex addiction look like? It depends on the patient. In a survey of about 1,000 inpatients receiving treatment for addictive sexual disorders, Robert Coombs identified 10 patterns of sexual behavior, presented in the table on page 3 (Coombs RH, Handbook of Addictive Disorders: A Practical Guide to Diagnosis and Treatment. Hoboken, NJ: John Wiley & Sons, Inc., 2004). Like other addictions, the core features of sex addiction are an inability to cut down or control the behavior, and greater use of the behavior than intended. For example, Alan’s use of pornography fits the “fantasy sex” pattern of addictive sexual behavior in Dr. Carnes’ typology.

How are sex addiction behaviors different from paraphilias, which are included in DSM-5? Paraphilia includes any intense and persistent sexual interest outside of foreplay and genital stimulation with phenotypically normal, consenting adults (American Psychiatric Association Diagnostic and Statistical Manual, Fifth Edition. Washington, D.C.: American Psychiatric Publishing, 2013). Sex addiction would fall under the category of other specified paraphilic disorders in the DSM-5 manual. Some of the patterns identified by Dr. Carnes are categories of paraphilic disorders, such as voyeuristic disorder, frotteuristic disorder, and exhibitionistic disorder.

When you meet Alan, he appears anxious and stresses that he’s “not a perv.” He tells you he began watching pornography in his early teens and attended his first strip club while in college. He typically went at least once per weekend as a way to “unwind.” After he married, Alan stopped watching pornography at first, but after a few months he found himself slipping back into his old habits. He also discloses that he compulsively masturbates while he watches pornography—at home as well as work. Over the past year, his behaviors have escalated to the point that he feels he can’t control them anymore. He fears his wife would divorce him if he gets caught, and he knows his job is at stake.

How to talk to patients about sex addiction
Even when seeking help for sexual addiction, patients are often too embarrassed to disclose the full extent of their behavior. Normalization is a tried and true technique for broaching such topics. Here are some examples:

Having patients complete a sexual history questionnaire can help, since people might feel less inhibited answering on paper than they do during an interview. There are several validated instruments that can facilitate this, such as the Sexual Addiction Screening Test-Revised (SAST-R), as well as these tools.


How to treat sex addiction
There are no proven effective treatments for sex addiction, and most of the literature consists of case reports and expert consensus recommendations. Experts usually recommend the same kinds of treatments that work for other addictions. One approach is to start with motivational interviewing in order to assess and elicit your patient’s motivation to change. Cognitive behavior therapy (CBT) is a mainstay for helping clients identify triggers for their behaviors, and you can combine this with relapse prevention strategies, such as making lists of alternative activities that patients can substitute for sexual compulsion (Rosenberg et al, J Sex Marital Ther 2014;40(2):77–91).

After the initial evaluation with Alan, you do not recommend biologic treatment as Alan does not have any comorbid disorders. He continues in weekly treatment for several months, using CBT to identify his triggers and control his urges. He begins attending Sexaholics Anonymous, and he says his compulsive sexual behaviors are decreasing. During treatment, Alan discloses that he has always felt too shy and uncomfortable to enjoy having sex with a partner. He agrees to bring his wife in for some couples sessions, he finally discloses his behaviors to her, and they work together to monitor his behaviors. His wife now password-protects their computers, and they discuss their sexual relationship more openly.

CATR Verdict
Some of your patients who seek treatment for anxiety and depression may be suffering from compulsive sexual behavior. Many come forward only when these behaviors threaten their jobs or their relationships, or when they’ve been forced into treatment by the legal system. With appropriate diagnosis and treatment, management of these behaviors is possible. 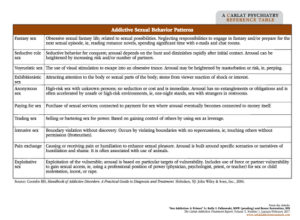