From The Carlat Addiction Treatment Report
Issue Links: Learning Objectives | Editorial Information
Over the last few decades, doctors have done a better job at convincing their patients to stop smoking. But much of this improvement has been relegated to patients without mental illness. A recent study found that from 2004 to 2011, the U.S. smoking rate declined from 19.2% to 16.5% in people without mental illness, but the rate dipped only slightly in those with mental illness, from 25.3% to 24.9% (Cook BL et al, JAMA 2014;311(2):172–182).

For your patients with serious psychiatric disorders, tobacco use disorder may not seem like the most pressing issue to treat. Because we are typically focusing on easing psychiatric symptoms enough to improve day-to-day functioning, a patient’s smoking will often take a back seat.

There are other issues when we are treating patients with substance use disorders. We might be hesitant to target their smoking habit for fear that it will lead patients to relapse to the more “dangerous” substance. That’s not an unreasonable concern, but the data show that treating tobacco use disorder in such patients does not lead to relapse; in fact, it actually improves long-term abstinence (Apollonio D et al, Cochrane Database Syst Rev 2016;11 Nov 23;11:CD010274).

Strategies for getting patients to quit smoking
Assuming you’ve decided to prioritize smoking cessation in psychiatric patients, the best treatment direction is not clear. Most treatment guidelines for smoking cessation are written for people without mental health disorders or other substance use disorders, let alone patients with co-occurring substance use and mental health disorders.

Generally, you should start by ascertaining how often the patient smokes, and whether the patient has tried to quit in the past. A past success will steer you toward that treatment. For patients who smoke intermittently, you should start with nicotine replacement therapies, such as nicotine lozenges or gum, which can be used on a PRN basis. Patients who smoke more frequently, such as several times per day, will need consistent nicotine replacement from a patch to prevent the peaks and troughs associated with nicotine cravings.

Second-line treatment involves one of two medications—bupropion or varenicline (Chantix). Bupropion’s mechanism of action is not known, but it does increase dopaminergic activity, which may or may not relate to its anti-smoking efficacy. Since this medication is effective for both depression and weight loss, it may be a particularly good choice for depressed, overweight smokers. Start most patients at 150 mg in the morning and increase to twice-daily dosing as tolerated. As is true for the antidepressant response, the anti-craving activity may be delayed by 2 weeks, which is when your patient should make a concerted effort to quit. This dosing is based on the original studies of Zyban, the branded version of bupropion approved by the FDA for smoking cessation. The dosing won’t necessarily work for all patients, and you may have to experiment with higher doses or extended release versions until you find the right package for a given patient.

Bupropion is well-tolerated by most psychiatric patients, but try to avoid its use in patients with bipolar disorder type I, who may be more prone to switching to mania. Patients with anxiety disorders can be activated by bupropion—that doesn’t mean you shouldn’t try it, but you should let patients know about that potential side effect.

Varenicline is the most effective smoking cessation medication available, but we tend not to use it first line in psychiatric patients because of potential neuropsychiatric side effects. Varenicline works as a partial agonist/antagonist of nicotine receptors. The nicotine stimulation works by stimulating nicotine receptors, blocking the dopamine effects and thereby decreasing the reward or enjoyment a patient feels when smoking. This decrease in gratification helps curb smoking over time, allowing for more successful cessation.

Due to concerns over worsening suicidal thoughts and agitation, varenicline came under scrutiny in 2009. However, a 2016 study comparing the use of these medications to transdermal nicotine and placebo in more than 8,000 smokers, with and without psychiatric comorbidities, found no significant difference in psychiatric adverse effects (Anthenelli RM et al, Lancet 2016;387:2507–2520). This provided the FDA with data to remove varenicline’s black box warning. The authors also note significant improvement in abstinence, with varenicline-treated patients 3.6 times more likely to stop smoking than placebo.

Bupropion also showed improvement, with patients twice as likely to stop smoking compared to placebo. In smokers with depression, bupropion could be a great option to treat both conditions with a single medication. Just be sure to remind patients to take their medication in the morning (and again midday, if on twice-daily dosing) so it doesn’t interfere with sleep. In addition, monitor your depressed patients closely while starting treatment and tell them to contact you immediately if they experience sudden changes in mood or have suicidal thoughts.

It’s important to note that most studies showing successful smoking cessation include medications and counseling. Often these counseling sessions are brief, targeted sessions that include cognitive behavioral therapy or motivational interviewing to keep patients engaged in their abstinence plan. Other interventions may include quit lines (1-800-QUIT-NOW), web-based resources, and text message alerts, which can be helpful for maintaining abstinence. For patients with psychiatric disorders, a combined approach is particularly important to ensure long-term success and prevent relapse. 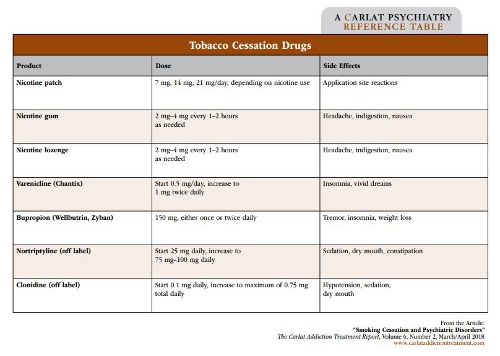 Follow-up is key
Getting patients to commit to stop smoking and set a quit date is half the battle. Once patients decide they are ready to quit, follow-up is essential for long-term success.

At follow-up appointments, have the patients quantify progress with how much their smoking has decreased or how many days they’ve been smoke-free. Encourage patients to identify benefits they receive from not smoking, and to utilize cessation resources to keep them accountable. If patients relapse, help them to identify triggers and troubleshoot ways to prevent relapses in the future. Remind patients that a relapse is just a hurdle that can easily be overcome.

To determine the effectiveness of your patients’ efforts to quit, consider using a carbon monoxide (CO) breathalyzer. These handheld devices measure the amount of CO exhaled, which correlates with the amount of CO in the blood. As patients cut back, they may smoke fewer cigarettes more extensively or take deeper draws, resulting in CO blood levels similar to their prior state. As patients stop smoking, their CO levels drop quickly, providing a quick and objective measure of their progress. Incorporating a CO breathalyzer into follow-ups can provide positive reinforcement and show patients their progress. For more information on this tool, see https://www.integration.samhsa.gov/pbhci-learning-community/Smokerlyzer_Guide.pdf.

CATR Verdict: Smoking cessation in the mental health population can be trickier than in the general population, but studies show that quitting can actually help in treating comorbid conditions. With thoughtful integration of cessation tools and regular follow-up, it’s doable. Start the conversation today!
Addiction Treatment
KEYWORDS addiction smoking_cessation_agents