Home » A Look at the Latest Antidepressant Meta-Analysis

A Look at the Latest Antidepressant Meta-Analysis

Adam Strassberg, MD
From The Carlat Psychiatry Report
Issue Links: Learning Objectives | Editorial Information | PDF of Issue
Adam Strassberg, MD Psychiatrist in private practice in Palo Alto, CA. Contributing writer to the Carlat newsletters. Dr. Strassberg has disclosed that he has no relevant financial or other interests in any commercial companies pertaining to this educational activity.
You may have read about the meta-analysis published in Lancet earlier this year on the efficacy evidence for all antidepressants (Cipriani A et al, Lancet 2018;391(10128):1357–1366). It’s a complicated paper, and in this article, we’ll take a closer look at it and give you our take on the bottom line.

The authors did a systematic review and meta-analysis, searching published and unpublished, double-blind, randomized controlled trials up to January 2016, notably also including the largest amount of unpublished data to date. Both placebo-controlled and head-to-head trials were included across 21 antidepressants, and each evaluated monotherapy for the acute treatment of adults with unipolar major depression. In total, the authors analyzed 522 trials covering 116,477 participants.

Here are some of the more interesting findings:

How might this study change the way you choose antidepressants? To better understand the analysis, TCPR interviewed John Ioannidis, MD, one of the study’s authors, and Professor of Medicine, Health Research and Policy, and Biomedical Data Science at the Stanford University School of Medicine. Dr. Ioannidis offered the following insight: 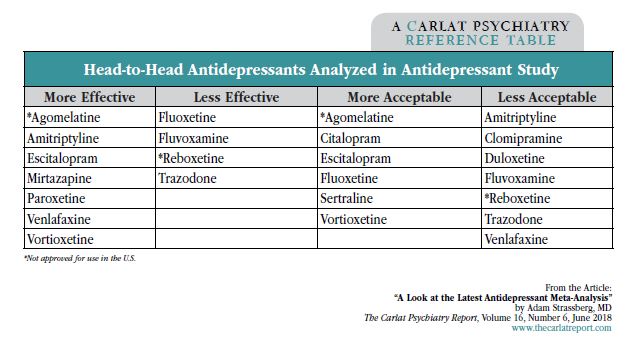 
TCPR Verdict: No big surprises in this study, which shows that SSRIs have the best combination of efficacy and tolerability—though efficacy is modest.