Barbara Farrell, PharmD Assistant Professor, Department of Family Medicine, University of Ottawa and Adjunct Assistant Professor, School of Pharmacy, University of Waterloo. Co-founder of the Canadian Deprescribing Network. Dr. Farrell has disclosed that she has no relevant financial or other interests in any commercial companies pertaining to this educational activity.
There’s no shortage of information on prescribing medications, but when and how do we stop them? The Bruyere Deprescribing Guidelines Research Team is a group of clinicians and researchers who’ve set out to answer those questions. They’ve recently published 5 deprescribing guidelines, 3 of which are for psychiatric medications: benzodiazepines, antipsychotics in dementia, and cholinesterase inhibitors. We caught up with the leader of this research program, Barbara Farrell, to learn more.

TCPR: What is deprescribing?
Dr. Farrell: Deprescribing refers to lowering or stopping medications that might be causing harm or no longer providing benefit. It’s done in a planned, collaborative, and supervised way rather than simply the patient stopping the medications independently.

TCPR: Sounds like something we should have been doing all along. Why now?
Dr. Farrell: I think people have been doing it all along, though maybe not defining it in that way. The term “deprescribing” first appeared in 2003. It’s come to the forefront because of growing awareness of the problems with polypharmacy: adverse effects, drug interactions, hospitalizations, emergency room visits, and even mortality.

TCPR: How do you talk to patients about deprescribing?
Dr. Farrell: I use plain language like, “A drug that was good for you then might not be good for you now.” I might add, “I want to make sure that you’re only taking medications you’re really benefitting from, and that we are always using the lowest effective dose. Over time the body may not get rid of drugs as easily, so it’s normal to gradually lower the dose.”

TCPR: Are the risks of polypharmacy greater in the elderly?
Dr. Farrell: Yes. As people get older, they absorb, process, and excrete drugs differently than they did when they were younger, and they also become more sensitive to CNS side effects. We also have more body fat as we age, and that can make fat-soluble drugs like diazepam accumulate because it lengthens their half-life.

TCPR: One of your guidelines focuses on benzodiazepines. When do you recommend deprescribing these?
Dr. Farrell: Anyone over age 65 who is taking a benzo for insomnia would be a good candidate for deprescribing. For younger people, if they’ve been taking a benzo for insomnia for over 4 weeks, coming off it should be considered. We should also consider deprescribing when the underlying problem, like anxiety, is already well-managed. On the other hand, our guidelines mention cases where continuing the benzo is reasonable, like for anxiety or other psychiatric illnesses that aren’t well-managed, or when the benzodiazepine is needed to treat an anxiety disorder. 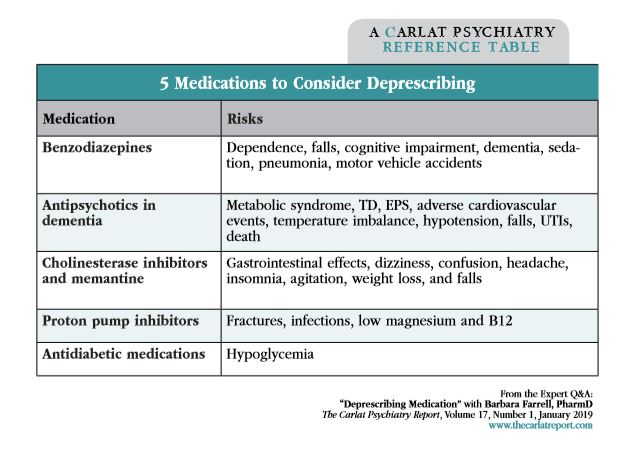 TCPR: How do you recommend coming off the benzo?
Dr. Farrell: Our general guide is to lower it by 25% every 2 weeks, and then by 12.5% near the end of the taper. That needs to be fine-tuned for the patient, though, so monitoring for problems every 1–2 weeks is important. Also keep in mind that this is what we recommend for insomnia and well-managed anxiety. It may be too fast for other patients.

TCPR: Some doctors switch to diazepam for benzo withdrawal because it has a long half-life, but you mentioned that may cause problems, particularly in the elderly where it can accumulate.
Dr. Farrell: In our deprescribing guideline, we don’t recommend automatically switching to diazepam. Generally, we recommend tapering with the benzo the patient is already on.

TCPR: Are there medications that can ease benzodiazepine withdrawal?
Dr. Farrell: We didn’t find any medications with good evidence to treat withdrawal, but we focused on insomnia, and there may be medications that help in individual cases. We do recommend cognitive behavioral therapy for insomnia (CBT-i), which is actually just as effective as a benzodiazepine for sleep (Pottie K et al, Can Fam Physician 2018,64(5):339–351).

TCPR: What are some high-yield behavioral interventions you recommend for sleep?
Dr. Farrell: One of the big things I do is work with patients on lowering caffeine. They’ll say, “Oh, caffeine doesn’t bother me,” and I’ll reply, “Well, why are you taking a sleeping pill then?” Caffeine also has a big impact on anxiety and tremor. Another one that can keep patients up at night is bronchodilators like albuterol.

TCPR: What about alcohol at night?
Dr. Farrell: That’s a problem. It tends to automatically wake people up at about 3 a.m. If someone is drinking 1–2 glasses at night, I’ll negotiate trying 1 week of not having a wine or beer in the evening to see if that helps the patient sleep, and invariably it does.

TCPR: A lot of people are using hydroxyzine (Vistaril) in place of the benzos. Any thoughts on deprescribing that one?
Dr. Farrell: Well, it’s highly, highly anticholinergic and sedating. Anticholinergic effects can easily add up with polypharmacy. A useful tool to keep track of that is the Anticholinergic Cognitive Burden Scale. I work in a geriatric day hospital, and we usually discourage people from hydroxyzine and similar meds like diphenhydramine (Benadryl). Most people don’t realize that Tylenol PM, Nytol, Nyquil (anything with “Night” or “Ny” in its name) contains an antihistamine that can increase the risk of dizziness, falls, and confusion.

TCPR: What about the z-hypnotics: zolpidem (Ambien), eszopiclone (Lunesta), and zaleplon (Sonata)? Are these any safer for sleep than benzos?
Dr. Farrell: Probably not. They have similar side effects, and there are growing claims that these z-drugs also have some withdrawal associated with them. Our benzodiazepine deprescribing guideline team doesn’t recommend switching to another sedative because we didn’t feel comfortable that any of them were safer than benzodiazepines. Trazodone is often seen as a more benign hypnotic, but a recent study of over 7,000 nursing home residents found that it had about the same fall risk as the benzodiazepines (Bronskill SE et al, J Am Geriatr So 2018;66:1963–1971). Physicians are also shifting from benzos to low-dose antipsychotics for sleep, but the risks usually outweigh the benefits there, especially if the patient doesn’t have an underlying psychiatric problem.

TCPR: What are some signs that a sleep medicine may no longer be safe?
Dr. Farrell: Cognitive impairment, sedation, dizziness, and falls. Also, if you ask, “How do you feel when you wake up in the morning?” and a patient says, “I feel exhausted,” “It takes me 3 hours to get dressed,” or “I go right back to bed after breakfast,” that’s a sign of an issue. These problems come on gradually as people age, so a lot of physicians don’t recognize them as side effects.

TCPR: What are some risks with long-term antidepressant use?
Dr. Farrell: There can be additive side effects as the patient is put on more medications that would usually present as cognitive or anticholinergic problems, or falls. I’ve seen patients who wake up at night because of dry mouth on a medication like duloxetine, and then trazodone gets added because they can’t sleep. The result is an additive effect: more dry mouth and nocturnal awakenings.

TCPR: Stopping the antidepressant may be difficult, though, and some guidelines recommend continuing it indefinitely in patients who’ve had at least 3 depressive episodes.
Dr. Farrell: Yes. It may be that the answer is to reduce the dose, switch to another antidepressant, or lower off other drugs that may be contributing to the side effects. For example, if diarrhea develops after many years on an SSRI, you might end up lowering other meds that can cause diarrhea, like metformin or proton pump inhibitors.

TCPR: Do you see side effects start after many years on a drug?
Dr. Farrell: They can come on gradually as people age. We’ve had patients develop diarrhea after taking an SSRI for over a decade, and it goes away when we reduce the dose. Another problem is blood pressure. Someone on venlafaxine may have normal blood pressure at first, but we’ve seen cases where hypertension develops later in life and the blood pressure goes down to normal after the venlafaxine is stopped.

TCPR: We’re also using more blood pressure medications in psychiatry, like prazosin for nightmares, propranolol for akathisia, and clonidine or guanfacine for ADHD. What should we watch out for with those as people age?
Dr. Farrell: Definitely orthostatic hypotension. The elderly are more prone to that problem, so we often warn them to sit up on the edge of the bed for a minute before standing. Once upright, they should hold onto the dresser for a minute before they start to walk. Also, as people get into their 80s and 90s, we start worrying about both cognitive impairment and fall risk with low blood pressure. People can become easily confused when blood pressure falls too low.

TCPR: How should we manage antipsychotics in dementia?
Dr. Farrell: In dementia, antipsychotics are often used for psychosis, aggression, and agitation—what we call the behavioral and psychological symptoms of dementia (BPSD). They’re not absolutely contraindicated for BPSD, and they can work in the short term, but they carry unique risks in that population, including stroke, cardiac arrest, and premature death. What we recommend is gradually withdrawing the antipsychotic in these patients if the BPSD has stabilized for at least 3 months. At that point, withdrawal does not lead to worsened symptoms compared to continuation, according to controlled studies (Bjerre LM et al, Can Fam Physician 2018;64(1):17–27).

TCPR: Medications like donepezil, rivastigmine, galantamine, and memantine are supposed to slow the progression of dementia. What’s the harm in continuing them?
Dr. Farrell: The risks are gastrointestinal side effects and weight loss, particularly for elderly women, as well as dizziness, confusion, headache, insomnia, tremor, and agitation. Rarer side effects include urinary problems, bradycardia, pulmonary and dermatological complications, seizures, GI hemorrhage, and rhabdomyolysis. Our guidelines recommend a trial off these medications after a year if it’s not clear that they are helping, if the patient’s condition has worsened, or if the patient has end-stage dementia.

TCPR: What if deprescribing fails and the patient can’t manage withdrawal?
Dr. Farrell: Sometimes it’s worth another try later on. People’s situations change. For example, some people come off anxiety meds more easily after they’ve retired and aren’t stressed out from work.

TCPR: Thank you for your time, Dr. Farrell.