Home » Evaluating the Mortality Risks of Antipsychotics in Children and Youths

Evaluating the Mortality Risks of Antipsychotics in Children and Youths

From The Carlat Child Psychiatry Report
Issue Links: Learning Objectives | Editorial Information | PDF of Issue
There are reports of increased mortality from antipsychotics in older adults. Now, we have a paper showing increased mortality in children, adolescents, and young adults aged 5–24 years. Given the frequent use, both on- and off-label, of antipsychotics, does this change how we use them? And if so, how?

What we already know
In 2005, the FDA added a black-box warning to all atypical antipsychotics. The agency cautioned against increased mortality when these drugs were used to treat “dementia-related psychosis.” No single medication accounted for the risk, and it was thought to be class-wide. The FDA found a 1.6- to 1.7-fold increased risk of mortality with atypical antipsychotics. Fatality rates were 4.5% in drug-treated patients compared to 2.6% in placebo groups (https://tinyurl.com/ycnt4nhl). Death was mostly due to heart-related events, such as heart failure and sudden death, or infections—mainly pneumonia (Schneider LS et al, JAMA 2005;294(15):1934–1943).

In June 2008, the FDA extended the black-box warning to typical antipsychotics. Researchers, surprisingly, found that typicals increased the risk of death even more than atypicals. The risk was greatest with higher doses (Wang PS et al, N Engl J Med 2005;353(22):2335–2341). As with the earlier black-box warning, this risk applied specifically to elderly patients with dementia-related psychosis.

The troubling finding was that patients in the high-dose group had an 80% (1.8-fold) increased risk of death, which is comparable to the risk in older adults. Even more troubling, the risk of death from cardiovascular or metabolic causes, which should be rare in this population, increased 4.3-fold. There was no elevated mortality risk in controls or with antipsychotic doses of 50 mg or lower.

The groups, however, were not equal. High-dose antipsychotic users had more mood disorders and other psychiatric comorbidities. They were more often prescribed mood stabilizers and other psychoactive drugs. They also had higher rates of diabetes, obesity, smoking, cardiovascular disease, and opioid use at baseline. Researchers attempted to control for these factors in their analysis, but it’s difficult to control for such confounding issues in a retrospective study.

Conclusion
What’s the takeaway message here? This is a single data point, and it was based on a large retrospective analysis. It’s unlikely that any prospective trial of the dangers of antipsychotics could ever be ethically conducted on children, so this type of data may be all we have to go on in making decisions. It’s certainly cause for concern, but it should not lead to a sweeping change in the way we practice. Nonetheless, given the potential dangers, we recommend extremely careful use of antipsychotic medications in all populations. We propose the following:


CCPR Verdict: High-dose antipsychotic use is usually a poor practice, and while not a definitive statement, the Ray et al study should give any clinician further pause. This paper talks of a very low threshold for “high-dose” antipsychotics. Since clinicians frequently dose antipsychotics in children above the threshold in the article, we have provided the “Antipsychotic Dose Equivalencies” table below so that you will know when you are exceeding these thresholds, even though they may be within the commonly accepted “usual dosing range” of the medication. 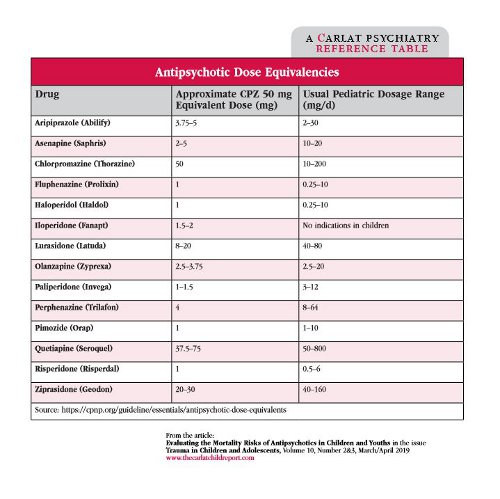