Adam Strassberg, MD.
From The Carlat Psychiatry Report
Issue Links: Learning Objectives | Editorial Information | PDF of Issue
Adam Strassberg, MD. Psychiatrist in private practice in Palo Alto, CA. Dr. Strassberg has disclosed that he has no relevant financial or other interests in any commercial companies pertaining to this educational activity.
Sexual side effects on SSRIs are so common that psychiatrist David Healy once argued these drugs more reliably lower libido than treat depression. Yet the problem isn’t limited to SSRIs, and it’s not unmanageable. In this article, I’ll look at some useful strategies to manage sexual dysfunction on antidepressants, antipsychotics, and mood stabilizers.

Gather the history
Sexual dysfunction is a classic “chicken and egg” problem. It can be a symptom of mental illness or a side effect of medication. It helps to get an idea of the patient’s baseline sexual function before starting medication.

Patients rarely volunteer a sexual history, so I make a habit of asking about it. Be culturally sensitive, but direct. Try saying, “These meds may affect sexual function, so I need to check in with you on this. How often are you having sex, and what problems have you noticed?” Alternatively, if directly approaching the topic of sex feels awkward, you can rephrase it along the lines of, “Have you noticed any problems in your sexual functioning?”

One thing to watch for is a midlife decline in libido. Testosterone is the key hormone in sex drive for both men and women. For women, testosterone levels fall during menopause. For men, the levels peak at age 16, and after that they drop by 1%–2% a year, which can start to affect libido by midlife. I don’t give supplements for this natural decline. The FDA advises against supplementation unless the drop is due to an endocrine disorder; otherwise the risks of heart attack and stroke outweigh the benefits.

Which med is responsible?
Even when they aren’t the sole cause of sexual dysfunction, most psychiatric medications have a good chance of contributing to the problem. There are a few exceptions, which I’ve listed in the table below. The rates are highest with serotonergic antidepressants: SSRIs, SNRIs, and clomipramine. Among the SSRIs, fluvoxamine has the lowest rate; for SNRIs, it’s duloxetine; and for tricyclics, it’s desipramine and nortriptyline.

Table: Medications With a Low Risk of Sexual Side Effects 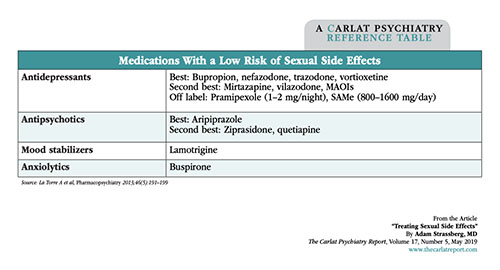 
Antipsychotics are almost as guilty, with rates (40%–70%) that approach those of SSRIs (60%–80%). Mechanisms range from anticholinergic to antidopaminergic, but one that’s useful to look for is elevated prolactin. In general, the problem is worse with prolactin-raising antipsychotics like paliperidone, risperidone, and haloperidol (La Torre A et al, Pharmacopsych 2013;46(6):201–208).

Hyperprolactinemia also has medical risks, such as osteopenia and galactorrhea, so a blood level is worth checking. When it’s high, I’ll switch to a prolactin-sparing antipsychotic like aripiprazole, ziprasidone, or olanzapine, or add an antidote to lower prolactin. Amantadine is my first choice (100 mg BID). Theoretically, psychosis is a potential side effect with amantadine, but I have not seen this in practice, and amantadine has the additional benefit of aiding weight loss on atypicals (Graham K et al, Am J Psych 2005, 162(9):1744–1746).

Data are scarce with mood stabilizers. Most mood stabilizers cause some sexual side effects, with the possible exception of lamotrigine. For anticonvulsants, reduction of free testosterone is a possible mechanism. Anticonvulsants that induce hepatic metabolism also increase the production of sex hormone–binding globulin (SHBG), and this SHBG then binds up free testosterone, effectively lowering its levels. An interesting theory, but does it fit the data? It turns out that enzyme-inducing anticonvulsants like carbamazepine and oxcarbazepine do have higher rates of sexual side effects than their non-enzyme-inducing cousins like valproate (La Torre A et al, Pharmacopsych 2014;47(1):1–6).

Management
Once I have an idea of the cause, I’ll move on to management. Many of the strategies are similar regardless of which medication is responsible:

Antidotes
When it comes to antidotes, many have been tested, but few have passed muster in a randomized controlled trial. Most of those were tested in ­SSRI-induced sexual dysfunction (see the table on this page). Among them, phosphodiesterase inhibitors (PDEs) like sildenafil (Viagra) have the best support. Though usually thought of for erectile dysfunction, they actually increase both penile and clitoral blood flow and can work in both genders. In women on SSRIs, PDEs improved orgasmic function in a well-designed, ­industry-funded study. The benefits of PDEs may also derive from CNS effects by enhancing dopaminergic activity in areas involved in sexual arousal, like the nucleus accumbens (Kyratsas C et al, J Sex Med 2013;10(3):719–729).

Although sildenafil is the best studied of the PDEs, tadalafil (Cialis) is often my first choice. Why? Its effects last up to 36 hours, allowing for a needed dose of spontaneity. Now that all 3 of the PDEs have gone generic, price doesn’t have to be a decision-maker, and tadalafil can be purchased at the pharmacy for as low as $1.00 a pill (goodrx.com). When patients pay out of pocket, I write for the maximum dose and have them break it up.


Among complementary and alternative (CAM) therapies, saffron and SAMe stand out. They are relatively safe, relieve sexual side effects on SSRIs, and have antidepressant properties of their own. Both improve erectile dysfunction in men, while saffron also helps arousal, lubrication, and dyspareunia in women (Kashani L et al, Hum Psychopharmacol 2013;28(1):54–60). Maca root, which has testosterone-like effects, is particularly effective in postmenopausal women (Dording CM et al, Evid Based Complement Alternat Med 2015;949036). The “Antidotes for Sexual Dysfunction on Serotonergic Antidepressants” table above lists products certified by Consumer Labs—a designation worth paying attention to with maca root, which has had problems with lead-contaminated products.

One medication I haven’t mentioned is mirtazapine. Unlike the antidotes in the table, its support is limited to open-label trials, but I’ve found it (at 15–45 mg/night) helpful in patients who can’t achieve orgasm on an SSRI. Mirtazapine antagonizes the descending 5-HT2 serotonergic fibers that are thought responsible for SSRI-induced anorgasmia (Atmaca M et al, Psychiatry Investig 2011;8(1):55–57).

Antidotes are understudied in psychosis and bipolar disorder. For lithium-induced erectile dysfunction, NSAIDs can help through effects on nitric oxide. Most NSAIDs interact with lithium, but aspirin does not, and it did indeed improve this side effect in a 6-week randomized ­placebo-controlled trial of men (aspirin 80 mg TID) (Saroukhani S et al, Bipolar Disord 2013;15(6):650–656).

TCPR Verdict: Sexual side effects are common, but not inevitable. Each class of psychotropics has a few good options that are relatively free of this problem. When switching agents isn’t feasible, antidotes can help, particularly phosphodiesterase inhibitors in men and women on antidepressants or, for patients with hyperprolactinemia on antipsychotics, amantadine.