Home » A Closer Look at Alpha-2 Agonists for ADHD

A Closer Look at Alpha-2 Agonists for ADHD

Jason Mallo, DO
From The Carlat Psychiatry Report
Issue Links: Learning Objectives | Editorial Information | PDF of Issue
C. Jason Mallo, DO. Attending Psychiatrist, Maine Medical Center, Portland, Maine. Dr. Mallo has disclosed that he has no relevant financial or other interests in any commercial companies pertaining to this educational activity.

The alpha-2 agonists guanfacine ER (Intuniv) and clonidine ER (Kapvay) were approved for ADHD in 2010–2011, but three things have held back their use:

Recently, the ER versions went generic and the first major trial in adult ADHD came out, so we decided it was time to take a closer look at these novel medications.

A little history
The alpha-2 agonists were developed in the 1960s for hypertension but fell out of favor as newer blood pressure medications came on the market. Their use in psychiatry took off in the 1980s after they were found to improve executive functioning in primates. Guanfacine and clonidine were tested back then in small studies of ADHD, tic disorders, anxiety, insomnia, agitation, and withdrawal from opioids, alcohol, and nicotine. The development of ER guanfacine and clonidine revitalized interest in larger studies, and these led to their FDA approval for pediatric ADHD in 2009–2010.

How they work
Stimulants increase norepinephrine activity, but alpha-2 agonists inhibit norepinephrine release, so how can they treat ADHD? The answer lies in their downstream effects. Alpha-2 agonists strengthen norepinephrine signals in the prefrontal cortex that are critical in mediating attention and behavior. Other mechanisms are likely involved; for instance, their effects on the locus coeruleus may attenuate inattention, hyperactivity, and impulsivity.

Use in ADHD
Guanfacine and clonidine have never been compared head-to-head, but judging by their individual trials, they appear to be equally effective for ADHD. Both are approved as monotherapy and as adjunctive to stimulants. Unlike stimulants, their effects build gradually over 2–5 weeks. When used adjunctively, the added benefit they bring to stimulants is small, but there is some evidence that the two classes of medications are better tolerated when taken together. Stimulants are less likely to cause hypertension, anxiety, and insomnia when taken with an alpha-agonist, and the alpha-agonists are less sedating when paired with a stimulant. In one study, 59% of patients reported sedation, somnolence, or fatigue with guanfacine monotherapy, but the rate was 11% when taken with a stimulant (Sallee FR et al, J Child Adolesc Psychopharmacol 2009;19(3):215–226).

We only know of one well-designed study of alpha-2 agonists in adult ADHD, and that involved guanfacine (see TCPR, October 2020). In this 12-week randomized controlled trial, guanfacine ER outperformed placebo (p = 0.0005; effect size 0.5). There were some limitations: The study was funded by big pharma, and 20% of participants in the guanfacine group discontinued treatment due to side effects (Iwanami A et al, J Clin Psychiatry 2020;81(3):19m12979).

Side effects and alternative uses
A major difference between guanfacine and clonidine is that guanfacine is less sedating, while clonidine has more research in psychiatric disorders that may be comorbid with ADHD. Those include PTSD-related nightmares, irritability in autism, bipolar mania, and self-cutting in borderline personality disorder (where clonidine worked better than placebo when taken PRN for urges to self-cut). Both alpha-agonists are helpful in nicotine cessation, alcohol withdrawal, and opioid use disorders, where they alleviate opioid withdrawal symptoms and prevent relapse. While the trials behind these various off-label uses are small, they are relevant because many of these disorders can worsen on stimulants, including bipolar disorder, borderline personality disorder, sleep, addictions, and tics (Canadian Agency for Drugs and Technologies in Health, 2018 Feb 21; www.tinyurl.com/5heorgde).

Overall, the alpha-agonists are not very well tolerated, with dropout rates that are higher than average for psychiatry. Dry mouth, constipation, fatigue, sedation, hypotension, bradycardia, and QTc prolongation are all impediments. On the other hand, alpha-agonists can relieve physical symptoms like tics, sweating on SSRIs, salivation on clozapine, perimenopausal hot flashes, and restless legs syndrome. Side effects are particularly common during initiation and titration, are dose related, and may lessen with time. Check HR and BP at initiation and dose increases. If daytime side effects are a problem, you can transition your patient to an evening dose. On the other hand, daytime dosing may be useful when targeting anxiety or agitation. Sudden discontinuation can cause rebound hypertension, particularly with clonidine (Hirota T et al, J Am Acad Child Adolesc Psychiatry 2014;53(2):153–173).

Formulations and pharmacokinetics
Both the IR and ER forms of guanfacine and clonidine are effective for ADHD. The ER versions are a good place to start, as they are the only ones FDA approved for ADHD, and they are more affordable now that their patents have expired. Clonidine ER and IR are ­usually dosed twice a day, as the ER and IR forms have a 12-hour half-life. If sedation is a problem, try dosing most or all of it at night. There is also a generic, weekly, transdermal clonidine patch that reduces the rate of sedation and dry mouth and was successfully used in psychiatric trials, including for ADHD.

Guanfacine IR and ER have a longer half-life of 16–18 hours and can be dosed once a day. Notably, both alpha-agonists have shorter half-lives in children. Guanfacine is more likely to become the victim of drug interactions (CYP3A4 inhibitors like fluvoxamine and nefazodone can raise it, while inducers like carbamazepine can lower it).

When converting patients between IR and ER forms, it is important to know that only 60%–75% of the ER form gets absorbed. So 3 mg/day of guanfacine IR is comparable to 4 mg/day of guanfacine ER, and 0.3 mg of clonidine IR is comparable to 0.4 mg of clonidine ER. Also, guanfacine’s absorption increases with high-fat meals, which could contribute to adverse events. Clonidine’s absorption is not affected by food.

TCPR Verdict: With their modest benefits and not-so-modest side effects, guanfacine and clonidine are not ideal for generalized use in ADHD. They do have a niche in a handful of comorbidities that can worsen with stimulants, including PTSD, bipolar disorder, borderline personality disorder, and addictions. 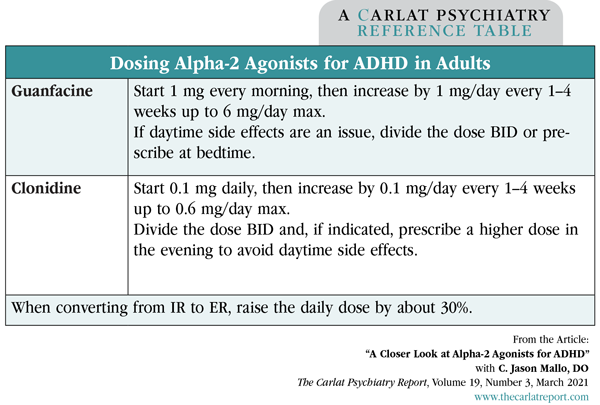 To learn more, listen to our 10/26/20 podcast, “How to Use Guanfacine and Clonidine.” Search for “Carlat” on your podcast store.

Hypothyroidism and Depression: Just How Related Are They?