TMS Treatment for Depression: An Update

Adam Strassberg, MD.
From The Carlat Psychiatry Report
Issue Links: Learning Objectives | Editorial Information | PDF of Issue
Adam Strassberg, MD. Psychiatrist, private practice. Dr. Strassberg has disclosed that he has no relevant financial or other interests in any commercial companies pertaining to this educational activity.

With six FDA approvals and several devices on the market, transcranial magnetic stimulation (TMS) has changed a lot in the past decade. No longer just for depression, it’s now FDA approved for OCD, nicotine cessation, and migraines. Efforts are underway to gain approval in bipolar depression, and the device has promising studies in PTSD, anxiety, schizophrenia, autism, and dementia. In this article, I’ll review these updates and see how TMS compares to other options for treatment-resistant depression (TRD).

TMS vs ECT
TMS treats depression, but not as well as ECT. Whether comparing effect size, response, or remission rates, ECT is consistently about 1.5 times as effective as TMS (Micallef-Trigona B, Depress Res Treat 2014;2014:135049). ECT is particularly effective for psychotic depression, while psychotic features predict a worse response to TMS.

Although TMS was first approved for depression that failed to respond to 1 (but not 2) antidepressant trials, we now know that it can work after multiple antidepressant failures. In the most recent meta-analysis, which included two dozen trials, TMS had an overall response rate of 25% (vs 11% for sham) and remission rate of 17% (vs 6% for sham). Most of those trials (80%) included only patients with true TRD, meaning more than 2 antidepressant failures (Sehatzadeh S et al, J Psychiatry Neurosci 2019;44(3):151–163). When it comes to TRD, both TMS and ECT have diminishing benefits as the number of failed antidepressant trials goes up.

The main advantage of TMS over ECT is tolerability, particularly when it comes to cognition. While cognition can worsen during ECT, it generally improves with TMS, including in patients with post-stroke depression (Wang Y, Psychiatry Res 2019;276:186–190). ECT also has the downside of requiring anesthesia, which adds to the inconvenience because patients cannot drive after the treatment. However, ECT is a little faster than TMS (kicking in at 2 vs 4 weeks) and can be administered 3 days a week instead of 5 days a week for TMS.

TMS vs medication augmentation
We don’t know how TMS compares to other augmentation strategies like the atypical antipsychotics, lithium, or the ketamines (IV ketamine and intranasal esketamine), as head-to-head trials are lacking. Judging by their effect sizes in TRD, however, TMS and IV ketamine fall in the large range (0.8–1.3), while other medication strategies (including intranasal esketamine) fall in the small range (0.3–0.4). The ketamines have the advantage of working quickly (within hours), but it’s not clear how well they work in the long term. IV ketamine was mainly studied as a short-term therapy, and the FDA-approved intranasal esketamine (Spravato) was practically indistinguishable from placebo by the 4-week mark in the majority of trials (Hung YY et al, Prog Neuropsychopharmacol Biol Psychiatry 2020;99:109850; Papakostas GI et al, J Clin Psychiatry 2020;81(4):19r12889).

Durability of response
The durability of TMS seems very similar to the durability of ECT, with 40%–50% of patients relapsing after about 6 months. A recent meta-analysis (Senova S et al, Brain Stimul 2019;12(1):119–128) showed that among initial responders, 66.5% sustained this response by 3 months, 52.9% by 6 months, and 46.3% by 12 months. This same study also supported the efficacy of maintenance treatment to prevent a relapse. For patients receiving maintenance treatment, the responder rate was 35.8% higher at 3 months and 58.7% higher at 6 months.

TMS is also used to treat depressive relapses in patients who responded to TMS during an previous episode. Over 80% of these patients respond to a second course of TMS (Janicak PG et al, Brain Stimul 2010;3(4):187–199). The treatment duration for the relapse is typically shorter than for the index episode.

Costs and side effects
TMS is generally safe, with a rare risk of seizures (1 in 30,000 sessions). The most common side effects are headache (20%) and scalp discomfort (20%), but time and money can be a hindrance. A full course of treatment runs 5 days a week, 20–40 minutes a day, for 6 weeks. The out-of-pocket cost for a 6-week course varies from $1,200 (for a typical $40 copay) to $8,000–10,000 (for in-network patients who have a deductible). Most insurers cover TMS, including some Medicare and Medicaid plans. 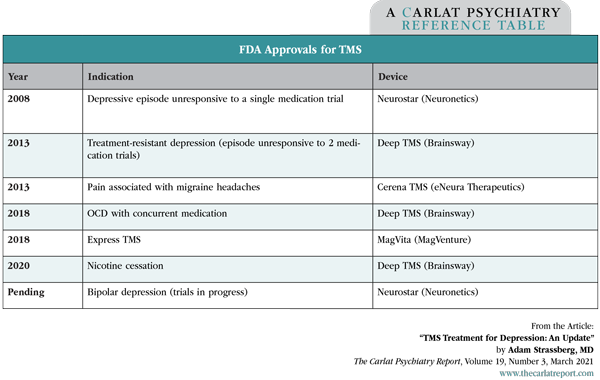 The ideal patient
The ideal candidate for TMS is a patient with depression who hasn’t responded to 1 or 2 antidepressant trials. Age doesn’t seem to influence response, and there is a growing database in children and adolescents. There are no known risks in women who are pregnant or breastfeeding.

Early studies suggest that TMS treats bipolar depression without precipitating mania, and the Neurostar device was recently granted “breakthrough status” to pursue an indication in bipolar disorder. That status will allow the company to speed through the approval process with smaller studies.

Which TMS protocol is best?
The first TMS device was FDA approved based on 4–6 weeks of treatment for 5 days a week, and this pattern of treatment remains the norm. Studies have evaluated several factors: number of treatments per day, frequency, length of treatment, intensity, pulse patterns, different areas of the frontal cortex, unilateral vs bilateral applications, types of patients appropriate for treatment, maintenance schedules for responders, and MRI-guided localization or other navigational methods versus approximation. But no variation in the treatment method has so far proved significantly more effective than any other.

TMS can be used as monotherapy, but is more effective when used as an add-on to an antidepressant medication. The benefits of TMS build up as the treatment is continued over time, but it’s unclear if there is any benefit beyond 6 weeks. Treatment is typically continued beyond 6 weeks if the patient has not remitted but is continuing to show improvement.

Which TMS device is best?
There are two types of TMS machines in clinical use: the figure-8 coil and the H-coil. The figure-8 coil is the more affordable because it’s off-patent ($50–$120K), while the patented H-coil is $220K. Most machines have additional maintenance costs, and we’ve compared the various leasing and pricing strategies offered by their manufacturers in an online supplement. 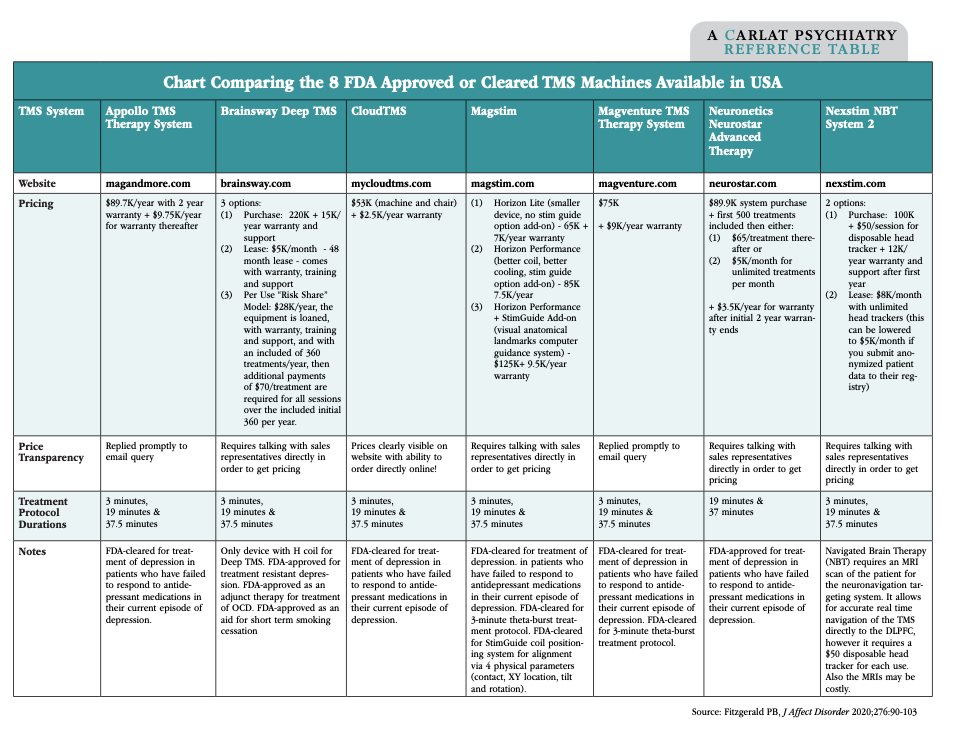 The H-coil is also called “deep TMS” because it penetrates a bit deeper into the brain (6 cm vs 5 cm). However, this theoretical advantage did not translate to a meaningful difference in the only head-to-head trial comparing the devices (see TCPR, Jan 2020). The figure-8 coil requires longer sessions than the H-coil (40 minutes vs 20 minutes). A faster protocol, dubbed “Express TMS,” was recently released for a MagVenture device. It uses “theta-burst stimulation” and only takes 3 minutes. Express TMS seems just as effective as the other devices, but comes at a cost of greater scalp discomfort.

TCPR Verdict: TMS is better tolerated but less effective than ECT. It works in depression, whether treatment-resistant, unipolar, or bipolar, and has a growing list of other psychiatric indications.