How to Prescribe Omega-3 Fatty Acids

Omega-3 fatty acids (“fish oil”) claim broad benefits in physical and mental health and have even made it into a few treatment guidelines in psychiatry. But most products on the shelf do not have the right ingredients for psychiatric use. In this article, I’ll review how and when to use omega-3s.

Mechanism
Omega-3s are “essential fatty acids,” meaning we cannot produce them on our own and must obtain them from our diet. In the brain, they coat nerve cell membranes and have neuroprotective and anti-inflammatory effects. Most modern diets are deficient in omega-3s, and serum omega-3 levels are particularly low in people with psychiatric disorders. However, it’s not clear that omega-3s work better in people with deficiencies, so testing serum levels is not yet recommended.

Omega-3 augmentation of antidepressants
Omega-3s have the most robust research in depression, with over 40 randomized controlled trials (RCTs) involving around 10,000 participants. Some of those studies were negative, but the results demonstrate a pattern that can inform practice. First, their antidepressant effects were only clear when the trials involved clinically diagnosed, DSM-based depression instead of nonspecific depressive symptoms. Second, only the trials that used a specific ratio of omega-3s were positive in meta-analyses (Hallahan B et al, Br J Psychiatry 2016;209(3):192–201).

There are two types of omega-3s: EPA and DHA (eicosapentaenoic acid and docosahexaenoic acid). The formulations that work either are pure EPA or contain at least twice as much EPA as DHA (Guu TW et al, Psychother Psychosom 2019;88(5):263–273). These formulations have been shown to be effective when augmenting standard antidepressants, but their efficacy is mixed when given alone. As augmenting agents, their effect size is medium (0.5–0.6), similar to the effect of the average psychiatric treatment.

We don’t know much about who will respond to omega-3s, but one controlled trial points to patients with inflammation (ie, those with a high-sensitivity C-reactive protein level > 3 mg/L). In that study, only the depressed patients with elevated inflammatory biomarkers responded to omega-3s, and the higher the inflammation, the better the response (for more on assessing inflammation, see TCPR Jan 2019) (Rapaport MH et al, Mol Psychiatry 2016;21(1):71–79).

Omega-3s are also effective as augmentation of mood stabilizers in bipolar depression, but here the research is not as robust, with seven RCTs. In mania, their benefits were small and nonsignificant (Grosso G et al, PLoS One 2014;9(5):e96905). 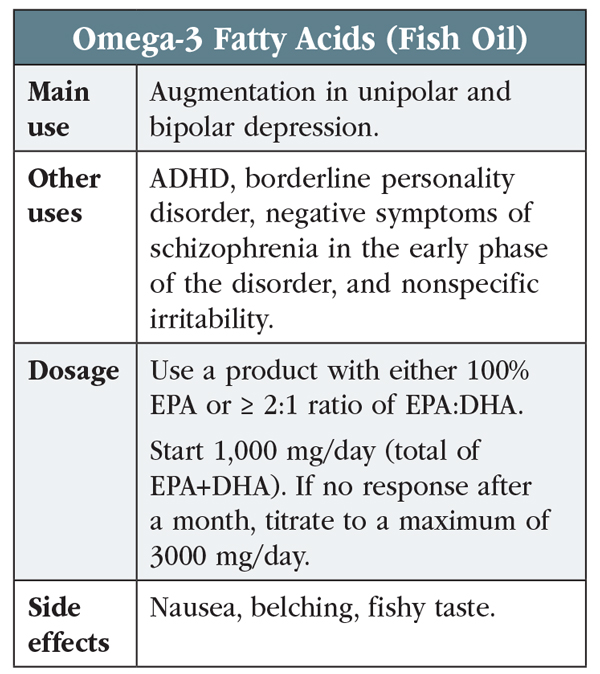 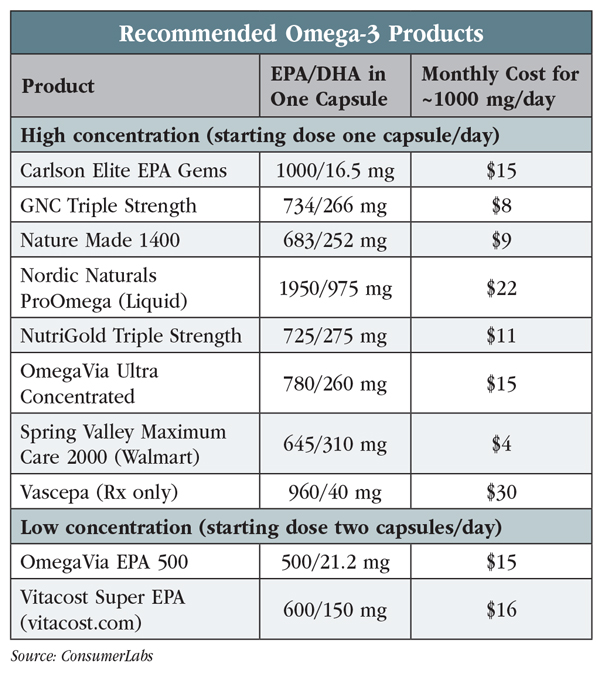 The finding that omega-3s work better in the early phase of schizophrenia raises the possibility that they may prevent mental illness. That was born out in a remarkable study from Vienna of 81 adolescents with mild psychotic symptoms and genetic risk factors for schizophrenia. The teens were treated with either a three-month course of omega-3s or placebo. A year after this brief inoculation, only 5% of the omega-3 group converted to schizophrenia, compared to 28% of controls. Seven years later, the rates were 10% vs 40% (with 80% retention of patients; Amminger GP et al, Nat Commun 2015;6:7934). Two other trials attempted to confirm this finding—one positive and one negative—but the negative study only followed patients for six months. The preventative potential of omega-3s has not been tested in bipolar disorder, but omega-3s did have therapeutic effects in high-risk teens with mild manic symptoms and strong family histories of bipolar disorder (Fristad MA et al, J Child Adolesc Psychopharmacol 2015;25(10):764–774).

Physical risks and benefits
Omega-3s are well tolerated with side effects of nausea, belching, and fishy taste (see table at left). These improve by choosing an enteric-coated or odor-neutralized product and refrigerating the capsules. Omega-3s may prolong bleeding time, a problem for patients undergoing surgery or taking anticoagulants, but this risk was not detectable at the doses used in psychiatry (< 4000 mg/day; Mori TA, Food Funct 2014;5(9):2004–2019). The FDA warns of possible arrhythmias with high-dose omega-3s in patients with atrial fibrillation.

One study found a correlation between omega-3 serum levels and prostate cancer, but other research refutes this or even shows the opposite effect, and the association might be explained by contaminants in dietary fish (Aucoin M et al, Integr Cancer Ther 2017;16(1):32–62). Contamination by heavy metals like mercury is a concern with fish oil, and the products we’ve recommended in the table at the top of the page were tested for metal contamination.

Omega-3s also have health benefits, and several prescription products are FDA indicated for lowering triglycerides. They also have evidence in hypertension, inflammatory bowel disease, dry eyes, macular degeneration, fatty liver, arthritis, asthma, and psoriasis (including psoriasis due to lithium). The doses in medical disorders are often on the high side (3000–4000 mg/day of EPA+DHA for psoriasis and elevated triglycerides).

Diet or supplement?
Technically, patients could get a clinical dose of omega-3 in their diet by eating a six-ounce serving of oily fish like salmon, herring, or anchovies twice a week. Other dietary sources include walnuts, flaxseeds, ­edamame, fruits, and dark green vegetables. Dietary sources do not have enough EPA to match the clinical dose, but that does not mean they won’t help. These foods contain other nutrients that improve brain health, and they were highly represented in the recent studies of diet in depression (see TCPR November/December 2021: “Nutritional Psychiatry in Practice” with Drew Ramsey, MD).

The “Recommended Omega-3 Products” table on page 4 lists products with the proper EPA:DHA ratio from manufacturers whose quality was approved by ConsumerLabs. Only one prescription product (Vascepa) contains enough EPA, and no vegetarian options have enough EPA for psychiatric use. Some products also contain omega-7s, which appear benign. Omega-7s are found in the diet and do not have significant risks or benefits.

TCPR Verdict: Consider omega-3s as an adjunct to medication for depression, bipolar depression, ADHD, borderline personality disorder, and negative symptoms of schizophrenia, but make sure to choose a reliable product with a high amount of EPA.