Home » Tricyclic Antidepressants: When and How to Use Them

Tricyclic Antidepressants: When and How to Use Them

Dr. Higgins has disclosed no relevant financial or other interests in any commercial companies pertaining to this educational activity.

Tricyclics have been used in psychiatry since the 1950s, when imipramine was introduced as the first mass-marketed antidepressant. Fluoxetine and the other SSRIs largely supplanted the tricyclics in the 1990s, but these medications still have their uses.

There are two kinds of tricyclics:

The tertiary amines are the oldest tricyclics and have norepinephrine as well as some serotonin reuptake inhibition, while their metabolites, the secondary amines, mainly inhibit norepinephrine reuptake.

When to use them
When all depressions are lumped together, the tricyclics are equally as effective as other antidepressants (Undurraga J and Baldessarini RJ, J Psychopharmacol 2017;31(9):1184–1189). However, tricyclics are potentially more effective for certain conditions:

Depression with chronic pain. Tricyclics relieve neuropathic pain independently of their antidepressant effects. Their benefits in depression with comorbid pain are comparable to duloxetine’s and superior to the SSRIs. In fibromyalgia, low-dose amitriptyline was more effective for insomnia and fatigue (25–50 mg QHS), while duloxetine showed more improvements with mood (de Farias AD et al, Adv Rheumatol 2020;60(1):35).

Prevention after ECT. Many consider the combination of nortriptyline and lithium after ECT to be the gold standard for forestalling the return of depression (Sackeim HA et al, JAMA 2001;285(10):1299–1307).

OCD. Clomipramine is the only tricyclic with good evidence in OCD, and it may be slightly more effective than the SSRIs (Sánchez-Meca J et al, J Anxiety Disord 2014;28(1):31–44).

Sexual side effects. The secondary amines are less likely to cause anorgasmia but more likely to cause erectile dysfunction (Werneke U et al, Acta Psychiatr Scand 2006;114(6):384–397).

Antidepressant augmentation
Tricyclics have been used to augment other antidepressants, particularly the SSRIs, since the 1980s (Taylor D, Br J Psychiatry 1995;167(5):575–580). In theory, the tricyclics provide noradrenergic effects that enhance the antidepressant response, but this combination can also be dangerous due to a drug interaction in the hepatic CYP enzymes (Palaniyappan L et al, Adv Psych Treatment 2009;15(2):90–99). Many modern antidepressants raise tricyclic levels,* so start low and increase slowly. Nortriptyline is one of the better-studied tricyclics for augmentation, and its well-established serum levels make drug interactions easier to monitor.

Risks and side effects
The tricyclics are best avoided in bipolar disorder as they rank near the top of antidepressants regarding their potential to induce mania and mixed states (Koszewska I and Rybakowski JK, Neuropsychobiology 2009;59(1):12–16). They are risky in borderline personality disorder as well, in part because they are toxic in overdose, and an amitriptyline study suggests they may trigger aggression and disinhibition in this population (Soloff PH et al, Psychopharmacol Bull 1987;23(1):177–181).

Caution is also warranted in patients with cardiac conduction disorders, as tricyclics have type 1 antiarrhythmic qualities. This risk is what makes them fatal in overdose, hence they are sometimes avoided or dispensed only in small quantities to actively suicidal patients.

Like most antidepressants, tricyclics can cause sedation, weight gain, and sexual dysfunction. These risks vary among the agents and are generally lower with the secondary amines. Outside of that, tricyclics’ main side effects are as follows: 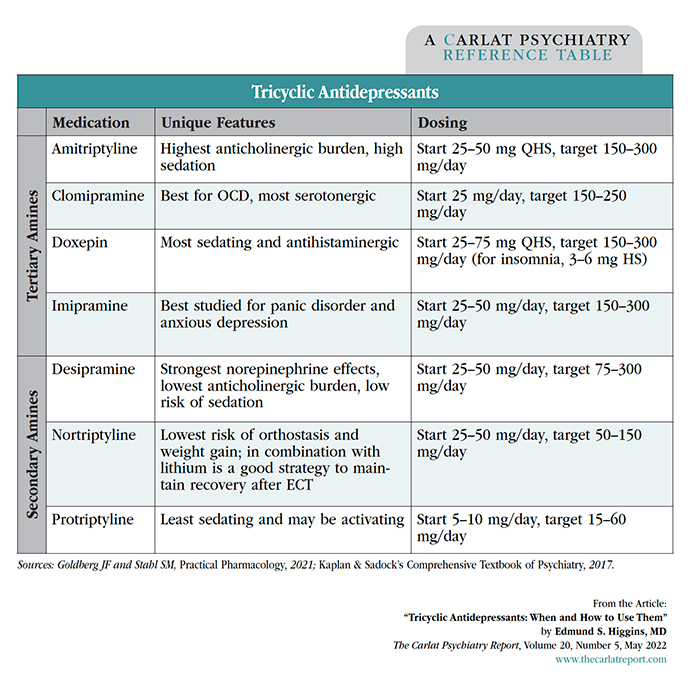 You’re more likely to see problems in the elderly with orthostatic falls and anticholinergic side effects. The latter may present as difficulty reading (from blurred vision), dental problems (from dry mouth), and—in more serious cases—small bowel obstruction from constipation or urinary tract infection from urine retention. Anticholinergics can also cause confusion and may increase the risk of dementia (Coupland CA et al, JAMA Inter Med 2019;179(8):1084–1093). Among the tricyclics, amitriptyline is the most anticholinergic, while nortriptyline and desipramine are the least.

Which to start with?
It is usually best to start with a secondary amine due to their higher tolerability. However, each tricyclic has unique properties that may make it the right fit for your patient. Clomipramine is best for OCD, doxepin for insomnia, and nortriptyline for those at risk of falls. 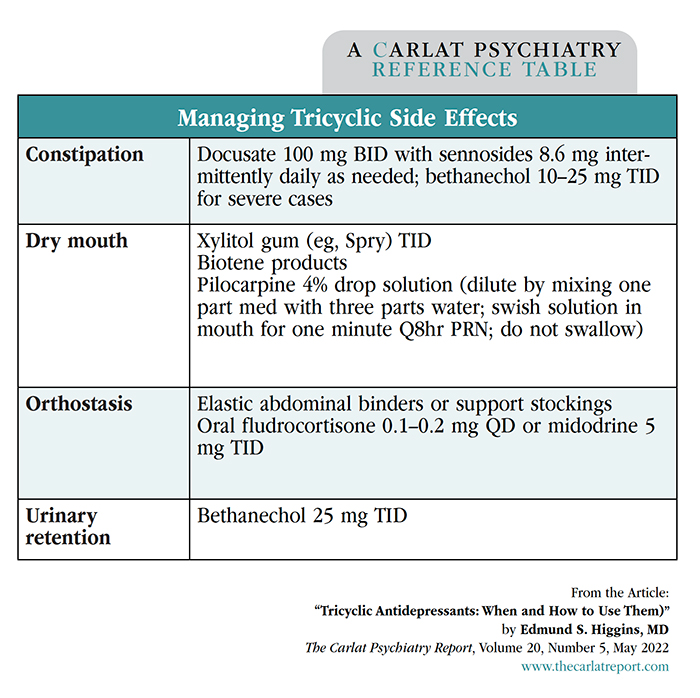 Dosing
As with most antidepressants, slow titration of tricyclics improves tolerability, such as raising the dose every five to seven days. Only three of the tricyclics have fairly reliable serum levels that can guide treatment: nortriptyline, imipramine plus its metabolite desipramine, and desipramine by itself. One caveat: These serum levels are most relevant to melancholic depression, which is the population in which most of the research was conducted. Nortriptyline’s ideal serum level (the best studied of the three) forms an upside-down “U-shaped” curve, meaning it’s less effective if too low or too high—a level between 50 and 150 ng/mL is the sweet spot. For imipramine, the best level is over 200 ng/mL (this value includes its active metabolite desipramine, sometimes called desmethylimipramine). Levels over 250 ng/mL were no more effective in studies but resulted in more side effects. Desipramine serum levels over 125 ng/mL can improve outcomes. Check serum levels eight to 12 hours after the last dose, and at least five half-lives (five to six days) after reaching the full dose.

Carlat Verdict: Tricyclics are rarely first line, but they are a good option in select situations, such as melancholic and treatment-resistant depression, depression with chronic pain, and OCD. With careful management and judicious selection, they are often better tolerated than their reputation suggests.
General Psychiatry
KEYWORDS antidepressants dosing side-effects treatment-resistant-depression weight-gain

SUBSCRIBE NOW
Table Of Contents
How to Use Varenicline (Chantix)
Racism and Psychiatry
Tricyclic Antidepressants: When and How to Use Them
CME Post-Test - Race and Mental Health, TCPR, May 2022
DOWNLOAD NOW
Featured Book
Featured Video
Featured Podcast
Recommended