Home » How to Use Varenicline (Chantix)

How to Use Varenicline (Chantix)

Steven A. Wyatt, DO. Adjunct faculty, University of North Carolina at Charlotte.

Dr. Wyatt has disclosed no relevant financial or other interests in any commercial companies pertaining to this educational activity.

Henry is a 45-year-old married man with anxiety and alcohol use disorder who smokes a pack a day. He has tried nicotine replacement in the past but was unsuccessful. His alcohol use has stabilized in recent months, and he believes he is ready to make another attempt at quitting smoking.

There are three medications with FDA approval for nicotine dependence: Nicotine replacement therapies, bupropion, and varenicline. Varenicline (Chantix) is arguably the most effective, but cost and concerns about neuropsychiatric side effects have limited its use, and a recent recall of the product temporarily stopped it entirely.

In September 2021, Pfizer voluntarily pulled branded Chantix from the market due to contamination with nitrosamines, a carcinogen that has tainted the production of numerous medications in recent years, including ranitidine, nizatidine, and metformin. The Pfizer patent had already expired a few months before this shutdown, and a generic varenicline is now on the market. With the price in decline and the appearance of new studies suggesting that this medication is safer than previously thought, it’s a good time to reevaluate where varenicline fits in psychiatric practice.

Tobacco use has declined significantly since the 1960s, when close to 50% of the adult US population smoked cigarettes. Today that figure is closer to 14%, but the rates have not declined as much for people with mental illness, including substance use disorders, who now make up nearly half of all smokers. This is in part due to the worsening of anxiety and depression some patients experience when quitting, though these symptoms typically resolve within the first few weeks or the first month. On the other hand, quitting has significant long-term benefits for both physical and mental health (Taylor G et al, BMJ 2014;348:g1151).

How well does varenicline work?
Nicotine produces its rewarding effects by activating the nicotinic acetylcholine receptors, a third of which project to the mesolimbic dopamine region. There, the nucleus accumbens or “pleasure center” is activated. Varenicline is a selective partial agonist with high affinity for the α4β2 site on the nicotinic receptor. It blocks nicotine from binding to that site, but as a partial agonist it still activates the receptor enough to prevent withdrawal symptoms and reduce cravings (Jordan CJ and Xi ZX, Expert Opin Drug Discov 2018;13(7):671–683).

That sounds good in theory, but what about the clinical evidence? A meta-analysis of over 100 trials concluded that varenicline was just over twice as effective as nicotine replacement therapies and bupropion in helping patients quit (Mills EJ et al, Harm Reduct J 2009;6:25). That finding was further confirmed in psychiatric populations in a large, industry-sponsored trial (Anthenelli RM et al, Lancet 2016;387(10037):2507–2520).

If a patient does not respond to varenicline, combining it with a nicotine patch can enhance its efficacy, as was shown in a long-term randomized controlled trial (Chang PH et al, BMC Public Health 2015;15:689). Nicotine patches can be started at any time, but this study started them one week before starting varenicline. The combination did not add significantly to varenicline’s side effects.

Many smokers use nicotine and alcohol together, with each one triggering the other. The nicotinic acetylcholine receptor (nAChR) is involved in modulating the rewarding effects of alcohol, and clinical evidence shows that varenicline reduces alcohol use in smokers who drink (Mitchell JM et al, Psychopharmacology (Berl) 2012;223(3):299–306).

Side effects
Varenicline’s most frequent side effects are nausea and insomnia. When varenicline is titrated up slowly, the incidence of nausea is reduced to about 15% of patients. About one in three patients have insomnia on the drug, which usually subsides after the first month. Other side effects include abnormal dreams, headache, dizziness, and constipation. Nightmares are the most troubling of these and may improve with clonidine (0.1–0.2 mg). In addition to reducing nightmares, clonidine may reduce nicotine cravings and withdrawal symptoms (Cahill K et al, Cochrane Database Syst Rev 2013;2013(5):CD009329).

Varenicline’s neuropsychiatric side effects have been more controversial. In 2009, the FDA placed a black box warning on varenicline that noted its potential to cause depressed mood, suicidal ideation and attempts, agitation, psychosis, and accidental injuries including traffic accidents. That was followed in 2015 by a new warning that varenicline may reduce alcohol tolerance, raising the risk of blackouts and seizures.

Those warnings were downgraded in 2016 following two important reviews. The first, a meta-analysis of over 10,000 smokers, found no clear relationship between taking varenicline and the development of depression, agitation, or suicidal ideation (Thomas KH et al, BMJ 2015;350:h1109). This was followed by a randomized, double-blind, controlled international study of over 8,000 participants, half with and half without a previous psychiatric history. The study, which was industry sponsored, showed no significant increase in moderate to severe neuropsychiatric events (Anthenelli RM et al, Lancet 2016; 387 (10037):2507–2520). While these newer data are reassuring, most psychotropics have the potential to cause rare neuropsychiatric problems, and I wouldn’t rule this possibility out for varenicline.

On the medical side, there were concerns about heart attacks and stroke on varenicline, but the FDA was reassured after a large randomized controlled trial did not find a statistical increase in these events (Benowitz NL et al, JAMA Intern Med 2018;178(5):622–631). 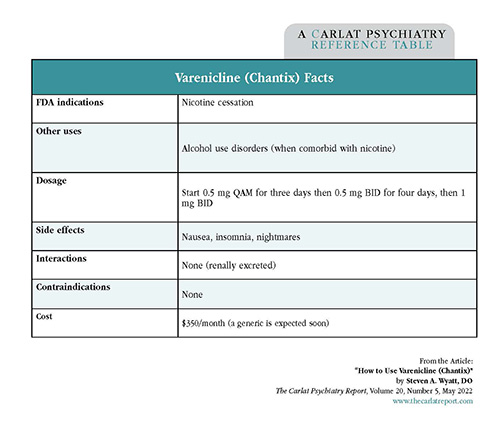 How to prescribe varenicline
The most difficult part of prescribing varenicline is engaging the patient’s motivation. Most patients want to quit smoking at some point in their lives. With this in mind, I keep nicotine dependence on the problem list and repeatedly let the patient know I will support their attempt to quit when they’re ready and have tools that may help them succeed at doing so. When the patient is ready, help them establish a workable quit date, ideally a day when support is available and they’ve made behavioral changes to distract them from cravings.

Start varenicline seven days prior to the quit date as described in the above. When prescribing, I’ll say to the patient: “Remember, you may still have some symptoms of nicotine withdrawal, most commonly agitation, but they are reduced when taking this medication. The most common side effect is nausea, which we’ll try to avoid by raising the dose slowly. I am delighted you are taking this big step in caring for yourself. I know it’s not easy. Let me know if there are problems.”

Patients should continue varenicline for at least three months after quitting. I usually continue it as long as the patient feels it is helping.

Like all anti-addiction agents, varenicline works best when used with relapse prevention counseling. As the patient is attempting to quit, I encourage behavioral changes such as putting their cigarettes out of reach, moving the chair they often smoke in, or cleaning their ashtray right after smoking. These changes and others cut down on triggers and lower the potential of unconsciously lighting up. I always encourage patients to contact QuitLine (1-800-QUIT-NOW), which is available in every state and paid for by cigarette taxes.

Henry decides to start varenicline and is able to gradually quit smoking, lowering to six cigarettes a day after a week and then quitting completely after three weeks on the drug. He engages with QuitLine and reduces his triggers, one of which is alcohol. Like many smokers, he finds it easier to maintain his reduction in drinking while on varenicline.

Carlat Verdict: Ask patients regularly about nicotine use and use a counseling approach when prescribing medication for smoking cessation. When it comes to efficacy, varenicline has an edge over other medications. In terms of side effects, it looks like the risks have been overstated, and people with psychiatric illness tolerate varenicline just as well as those without.

Disulfiram: An Underused Strategy for Alcohol Use Disorders

SUBSCRIBE NOW
Table Of Contents
How to Use Varenicline (Chantix)
Racism and Psychiatry
Tricyclic Antidepressants: When and How to Use Them
CME Post-Test - Race and Mental Health, TCPR, May 2022
DOWNLOAD NOW
Featured Book
Featured Video
Featured Podcast
Recommended