Home » How to Identify and Treat Apathy and Late-Life Depression

How to Identify and Treat Apathy and Late-Life Depression

Dr. Aziz and Dr. Cromwell, authors of this educational activity, have no relevant financial relationship(s) with ineligible companies to disclose.

In this article, we will discuss apathy and how to differentiate it from major depression. We’ll then review some treatment options for late-life depression and apathy.

Apathy involves a lack of motivation or interest that’s independent of emotional distress. This in turn leads to fewer goal-directed behaviors, decreased cognitive activity, and blunted emotional responses. Apathy is considered the most common behavioral and psychological symptom of dementia, and it is almost universally present in patients with severe dementia. Apathy can have a devastating impact on older adults by increasing caregiver burden, social isolation, and morbidity.

The most common causes of apathy in older adults are dementia and depression. Apathy can occur in traumatic brain injuries, strokes, schizophrenia, thyroid disorders, substance intoxication or withdrawal, and as a medication side effect (eg, with SSRIs). Various brain regions are involved in motivation, so damage to any of these regions might be linked to the syndrome (Bogdan A et al, Front Pharmacol 2020;10:1581).

Late-life depression (LLD) is defined as depression that begins after age 60. Compared to depression in younger adults, LLD is less associated with mood symptoms. Patients will often have psychomotor retardation, decreased activity, and fatigue. LLD is concerning because of its association with poor quality of life and increased mortality, including from suicide.

Differentiating between apathy and LLD

Distinguishing apathy from LLD commonly presents a clinical challenge because the symptoms often overlap. There is a main differentiating feature: In apathy there is usually amotivation causing emotional indifference or “neutral” affect, while in depression there is usually dysphoric affect (Ishii S et al, J Am Med Dir Assoc 2009;10(6):381–393). See “Features of Apathy vs Late-Life Depression” table. Anhedonia, another core symptom of depression, can also be confused with apathy. However, anhedonia refers to the loss of pleasure in activities, while apathy refers to the loss of interest and lack of initiation in activities.

Apathy is usually diagnosed by clinical interview. In patients with preserved insight, ask questions like, “Are you doing as much as you used to? Are you still interested in old hobbies or other pursuits? Does someone have to push you to participate in activities?” Patients who have severe cognitive disease often lack the insight needed for a full assessment, so you will rely more on reports from caregivers.

It can also be challenging to distinguish apathy from symptoms caused by progressive cognitive decline. For example, decreased interest in new activities can be due to memory problems that cause new activities to seem confusing. In such cases, ask about tasks that the patient has always been able to perform, such as reading. You can ask caregivers whether the patient seems indifferent to engaging in activities throughout the day.

Questionnaires such as the Apathy Evaluation Scale-Clinician Version (AES-C; www.tinyurl.com/5aam47vf) or Geriatric Depression Scale (GDS; www.tinyurl.com/yckrm5r8) can help screen for these disorders. The GDS will walk you through a variety of mood symptoms while avoiding questions about physical symptoms, as they are frequently reported by older adults in general.

The best treatment for apathy depends on the underlying diagnosis. Although many patients with apathy respond poorly to antidepressants, they are still worth trying. Go-to medications include sertraline up to 200 mg/day or escitalopram up to 10 mg/day. If SSRIs are not helpful, you can consider a bupropion trial of up to 300 mg/day because it targets dopamine pathways (Bogdan et al, 2020). If apathy is suspected to be due to SSRI treatment, it’s best to switch to a different medication (Padala PR et al, Medicine (Baltimore) 2020;99(33):e21497). Also consider the possibility that the apathy is caused by another medication, such as a benzodiazepine, an atypical antipsychotic, or a pain medication.

When treating apathy in a patient with dementia, we recommend first addressing any underlying medical issues. You can then encourage daily exercise and increased socialization. Patients often require an individualized approach, which may include checking hearing aids, obtaining a rolling walker, or hanging up an orientation board (Ishii et al, 2009). Creating daytime structure is crucial for these patients. The best types of activities are simple, organized, and related to something the patient had previously enjoyed, such as an exercise class.

When selecting medications, first trial a cholinesterase inhibitor (eg, donepezil up to 10 mg/day) unless the patient has frontotemporal dementia. If the patient’s dementia is more advanced, you can add memantine up to 10 mg twice daily.

Due to concerns about medical comorbidities, low-dose stimulants aren’t often prescribed as a first-line treatment. However, a recent clinical trial using methylphenidate 10 mg twice daily showed tolerability and a statistically meaningful decrease in apathy, but not in general quality of life (Mintzer J et al, JAMA Neurol 2021;78(11):1324–1332). Lastly, direct dopamine agonists, such as pramipexole and ropinirole, can be helpful for patients who have Parkinson’s disease with dementia and apathy.

LLD is frequently accompanied by medical illness or cognitive impairment, making it daunting to treat. While both psychotherapy and medications can be effective for LLD, medications are generally used first—therapists with LLD experience are in short supply, and moderate to severe LLD generally requires a course of antidepressants to achieve a response.

Antidepressants are more effective than placebo, but the remission rate in older adults is lower than in younger patients. Several factors decrease antidepressant effectiveness in older adults. They don’t work as well when depression occurs in the context of dementia. They also don’t work well in patients with executive dysfunction, common in LLD.

Because of their favorable side effect profiles and low cost, SSRIs are the first-line treatment for LLD. The best evidence is for sertraline, citalopram, and escitalopram. Many clinicians prefer escitalopram over citalopram, as citalopram carries a black box warning for QTc prolongation with doses >20 mg/day in patients older than age 60. Another popular choice is mirtazapine because its side effects can be used to address insomnia and loss of appetite/weight loss. However, mirtazapine doesn’t have as much evidence supporting its use. SNRIs and bupropion are solid second-line options (see “Antidepressants Used to Treat Late-Life Depression” table on page 3).

Tricyclic antidepressants (TCAs) also have good efficacy in LLD but, along with monoamine oxidase inhibitors (MAOIs), are not recommended due to their potential for drug-drug interactions and their poor side effect profiles (Allan CL and Ebmeier KP, Adv Psychiat Treatment 2013;19(4):302–309).

When starting an antidepressant in older adults, we recommend discussing the risks of bleeding in patients taking NSAIDs, anticoagulants, or antiplatelet agents. We suggest reviewing drug-drug interactions (duloxetine, fluoxetine, fluvoxamine, and paroxetine are the worst offenders; drug interactions are lowest with escitalopram, mirtazapine, sertraline, and venlafaxine). Consider mentioning the risk of falls and fractures, as SSRIs decrease bone density. We recommend educating patients about symptoms of hyponatremia, including dizziness, fatigue, headaches, confusion, and seizures. Rates of hyponatremia with SSRIs/SNRIs are highest in older adults and often occur within 14 days of medication initiation. Bupropion, mirtazapine, and TCAs have lower rates of hyponatremia than SSRIs (Nelson JC, Handb Exp Pharmacol 2019;250:389–413). Finally, if prescribing citalopram or TCAs, we recommend reviewing the black box warnings for QTc prolongation, which can lead to sudden cardiac death.

Another augmentation strategy is adding methylphenidate at 5–40 mg/day. This may improve mood, boost well-being, and lead to higher remission rates. It appears to be a safe strategy, although you might consider consultation with a cardiologist when working with patients who have cardiac risk factors. There are also limited data on methylphenidate’s long-term use, so consider prescribing it short-term to help “jump-start” recovery (Lavretsky H et al, Am J Psychiatry 2015;172(6):561–569).

Psychotherapy is comparable in efficacy to antidepressant medications, although it isn’t used often due to a lack of clinicians trained to work with older adults and provide evidence-based therapies. The most beneficial treatments are:

ECT is the most effective treatment for LLD. It works better in LLD than in younger depressed patients, with a remission rate of 60%–80% (Alexopoulos GS, Transl Psychiatry 2019;9(1):188). Regard ECT as a first-line option in major depressive episodes accompanied by any of the following:

ECT is a safe treatment even in patients with dementia or who have experienced a stroke. Headaches and 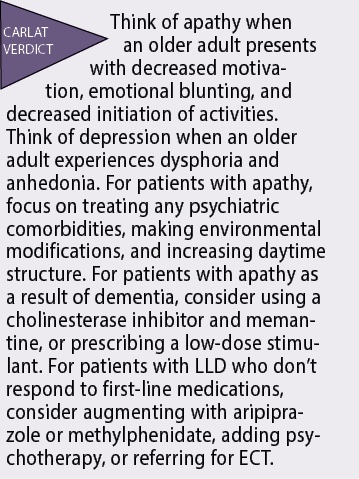 temporary memory loss around the time of treatment are the most common adverse reactions. In older adults, the death rate is low, and there are very few absolute contraindications (pheochromocytoma and elevated intracranial pressure with mass effect). In one systematic review, ECT-related mortality rate was estimated at 2.1 per 100,000 treatments. In comparison, the mortality rate for general anesthesia during surgery was higher at 3.4 per 100,000, making ECT a safer procedure (Tørring N et al, Acta Psychiatr Scand 2017;135(5):388–397).

One downside to ECT is a high relapse rate in the months following treatment. So, patients need to be followed closely and may require maintenance medications. Some patients may do well with maintenance ECT (periodic treatments following the index ECT course).

Repetitive transcranial magnetic stimulation shows encouraging outcomes and is a well-tolerated treatment, although further research is needed regarding the optimization of treatment parameters in older adults. Few older adults have been enrolled in deep brain stimulation trials, so its effects on LLD are largely unknown. Small studies using vagus nerve stimulation for indications other than LLD suggest it is reasonably well tolerated in older adults, but there are currently insufficient data on its use for LLD.