Home » Do Antidepressants Work for Kids?

Do Antidepressants Work for Kids?

Daniel Carlat, MD
From The Carlat Psychiatry Report
Issue Links: Editorial Information | PDF of Issue
Daniel Carlat, MD Dr. Carlat has disclosed that he has no significant relationships with or financial interests in any commercial companies pertaining to this educational activity.
What a bind we seem to be in.

On the one hand, we are short several thousand child psychiatrists in the United States, and parents are beating down our (generalist) doors to get their children medicated. On the other hand, every other piece of news about childhood psychopharmacology seems either bad or lukewarm.

In this issue, TCR takes a stab at sorting through one particularly controversial issue--the use of antidepressants in children and adolescents.

To begin with tricyclics (TCAs): while they are tremendously effective for adults with depression, they appear not to touch depressed kids, regardless of the dose. Studies using amitriptyline at 173 mg/day (Birmaher, JAACAP, 1998;37:527-535), desipramine 214 mg/day (Klein, Depress. Anxiety, 1998, 7:15-31), and more recently, imipramine 205 mg/day (Keller, JAACAP, 2001;40:762- 772), have all failed to show any difference between active TCA treatment and placebo in well-designed double blind, random assignment studies.

Prozac has won approval, but other good candidates are hard to find

Why such dismal performances? There is some interesting laboratory data indicating that the noradrenergic system is pretty immature at a young age, and that it therefore may be atypically unresponsive to medications that boost norepinephrine levels. However, a recently approved norepinephrine reuptake inhibitor, Straterra (see TCR 1:4) appears to be just as effective for kids as for adults, casting some doubt on this theory.

Nonetheless, there's not a lot of hand-wringing over this anti-TCA data, because many of us remember the unsettling reports in the 1990s of 8 sudden deaths in children taking TCAs, mostly desipramine. While the issue of causality is controversial, the bottom line is that you’d better be pretty darn cautious when prescribing TCAs to kids, and if there’s a reason to avoid the risks, so much the better!

What about the SSRI's? There have been a grand total of five published placebo-controlled trials of SSRIs in kids. Three involved Prozac, one involved Paxil, and the fifth involved Zoloft. The results are charted below.

Table: The Five Published Placebo-Controlled Studies on SSRIs in Kids (As of November 2003) 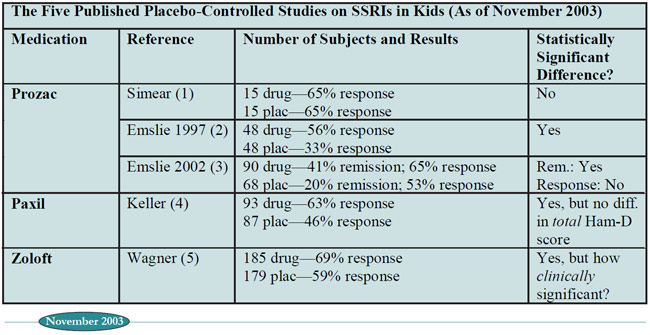 As you can see, Prozac comes out looking pretty good, with two positive studies, which is why it is currently the only antidepressant approved by the FDA for children.

The one published study of Paxil showed a significant response rate, but when the outcome was the final average depression score, there was no separation from placebo. There are also three unpublished studies of Paxil for kids, all of which are being pored over by the FDA even as you read this. The results are available through your GlaxoSmithKline rep, and they are not impressive. These studies enrolled a total of 288 depressed children or adolescents in the Paxil arms, vs. 201 on placebo. There was nary a wisp of a difference between response to drug vs. placebo; in one study ("study 701"), there was actually a trend in favor of placebo.

The recent Zoloft study received plenty of good press, but a 69%/59% drug/placebo difference doesn’t spark a whole lot of enthusiasm, even if it is statistically significant.

But what about the other newer antidepressants?

Wellbutrin is safe to use for adolescents, which we know from successful studies of ADHD, but only one uncontrolled study has examined this for outpatient depression, in adolescents with both ADHD and depression or dysthymia (Daviss, JAACAP, 2001, 40:307-314.) Wellbutrin (average dose 4 mg/kg per day, in split dosing) resulted in a 62% response rate for ADHD and a robust 87% response rate for depression or dysthymia. Impressive numbers, but this was an open label study, in which placebo effects are impossible to separate from medication effects.

There have been placebo-controlled studies of Effexor, Serzone, and Remeron in kids, none of which have shown benefit over placebo.

The bottom-line seems to be that antidepressants are only marginally more effective than placebo when given to children and adolescents. Nonetheless, the only way we non-researcher clinicians can ethically engage this powerful placebo effect is by writing out prescriptions for real medications. What more can one say? Time to sharpen up your psychotherapy skills!

TCR VERDICT:
For Kids: First A Hope, then a Prayer, then an SSRI