Home » How to Help Your Patients Lose Weight

How to Help Your Patients Lose Weight

Daniel Carlat, MD
From The Carlat Psychiatry Report
Issue Links: Editorial Information | PDF of Issue
Daniel Carlat, MD Dr. Carlat has disclosed that he has no significant relationships with or financial interests in any commercial companies pertaining to this educational activity.
Many pages of The Carlat Report have been devoted to how we cause our patients to become obese with some of the medications we prescribe. In this article, we review ways in which we can atone for our sins.

To begin with, you need to learn what Body Mass Index (BMI) is, because this is the preferred outcome variable in all the obesity research these days. The BMI takes height into account in determining how overweight (or underweight) somebody is. The formula is: weight (in kg) divided by height (in meters) squared. You can use inches and pounds with the NIH table at http://www.nhlbi.nih.gov/guidelines/obesity/bmi_tbl.htm (go ahead – look yourself up).

Normal weight is classified as a BMI of 18.5- 24.9, overweight is 25-29.9, and a BMI of 30 or above is considered obese The definitive study of the relationship between BMI and mortality (NEJM 1999; 341: 1097-1105) followed more than 1 million men and woman over 14 years, and reported the BMIs of those who died during that period. The lowest death rates were found among women with BMIs from 22.0 to 23.4 and among men with BMIs from 23.5 to 24.9. Of course, as one’s BMI increases, one’s death rate goes up. For example, men with BMIs of 35 or higher had triple the rate of cardiovascular death as the ideal group. People with very low BMIs also incurred a higher death rate, but these increases were quite small.

If you weren’t already motivated to prevent weight gain in your patients, hopefully this data motivates you further. Unfortunately, many psychiatric medications cause weight gain. The table below is helpful as a quick reference of weight gain liabilities of some of the more common agents we prescribe. 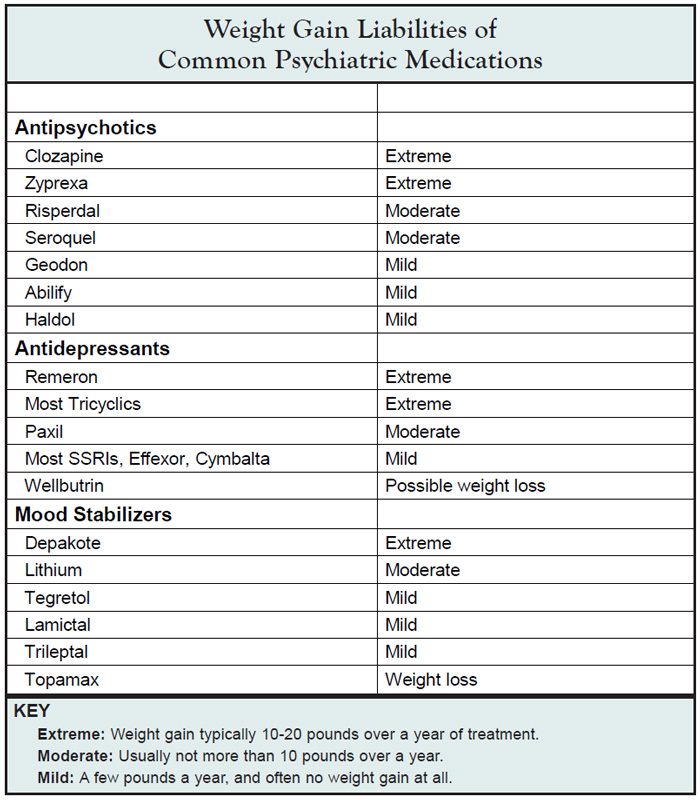 Helping Patients Lose Weight
Assuming that you have calculated your patient’s BMI and that you both agree that his or her weight is a problem, how do you go about facilitating weight loss? Most experts recommend setting a pretty modest weight loss goal initially, on the order of 10% of initial body weight over six months. Setting the bar low helps prevent failure and disappointment.

Most patients have a hard time sticking to a diet on their own, and a recent study comparing self-help dieting with participation in Weight Watchers bears this point out. In this study, about 150 overweight or obese men and women were randomized to Weight Watchers vs. “self help” (two 20 minute nutritionist visits and some pamphlets). After one year, the Weight Watchers group lost 9.5 lbs. vs. 2.9 lbs. for the self-help group. At two years, there was some weight regain, but the Weight Watchers group was still lighter, with a loss of 6.4 lbs, than self-help with 0.4 lb (JAMA 2003; 289:1792- 1798).

Not that Weight Watchers is special--all commercial diet programs seem to work about equally well, meaning very modestly. A more recent JAMA article randomized dieters to four popular programs: Atkins, Zone, Weight Watchers, and Ornish. After one year, each program produced modest weight loss, ranging from 4.8 pounds for the Atkins diet to 7.3 pounds for the Ornish diet. Differences among them were not statistically significant (JAMA 2005; 293:43-53).

Exercise is important too, although the oft-cited recommendation of 45 continuous minutes of exercise three times a week can be a tall order for people who are obese and, according to another study, may be no more effective than shorter bursts of exercise spread out throughout the day. In this study, 148 overweight women were randomized to three different types of exercise: 40 minutes/day of walking; 40 minutes/day but divided up into 10 minute sessions; and 40 minutes in short sessions on a home treadmill. The women in the three groups lost weight equally well, and those in the short session/home treadmill group were more likely to actually exercise during the last half-year of the study (JAMA 1999 282: 1554-1560). The moral of this story? Advise your patients to exercise in short sessions throughout the day and tell them to get a treadmill if they can afford one.

Medications for Obesity
Believe me, there are a lot more prescription medications for weight loss than you realize. For example, have you ever heard of diethylpropion, mazindol, phendimetrazine, or phentermine? They’re all FDA-approved for obesity, and each is a basic appetite suppressant, related to amphetamine. There are also a number of non-stimulant medications, which we’ll focus on because they are generally considered safer, although not necessarily more effective, than stimulants.

Xenical (orlistat)
It sounds like a dream-come-true: A pill that simply prevents the absorption of too much fat. Who would need to diet anymore? Despite its promise, orlistat has not become as popular as you might predict. Most patients have bouts of diarrhea and fatty stools over the first four weeks, and beyond that, it’s not miraculously effective, leading to only about 6 more pounds of weight loss than placebo over one year (International Journal of Obesity 2003; 27:1437-1446). It’s dosed at 120 mg TID with meals, and patients should take vitamin supplements to ensure they get their daily A, D, E, and K. Rumors are that is will be sold over-the-counter soon.

Despite its problems, Xenical may be helpful for psychiatric patients, especially those with metabolic complications of atypical antipsychotics. In one study, patients with metabolic syndrome and type 2 diabetes (without mental illness) were randomized to receive either orlistat 360 mg QD plus dieting or dieting alone. After 6 months, those in the orlistat group lost more weight, had improved measures of glucose control and systolic blood pressure, had lower cholesterol levels, and were less likely to meet criteria for metabolic syndrome (Curr Med Res Opin 2004; 20(9):1393- 1401).

Meridia (sibutramine)
Meridia works by inhibiting the reuptake of both norepinephrnie and serotonin, thereby suppressing appetite. Large placebo-controlled studies have shown it to be quite likely the most effective of the weight loss meds, leading to an average weight loss of close to 10 lbs. more than placebo over a year (International Journal of Obesity 2003 27: 1437-1446).

In psychiatry, Meridia (sibutramine) seems quite effective for the treatment of binge eating disorder. According to a recent study, it reduced binge eating and depression, and also led to 16 lbs. of weight loss (vs. small weight gain in the placebo group). (Arch Gen Psychiatry 2003; 60:1109-1116). Patients in this study received Meridia 15 mg QD; only dry mouth and constipation were more common in the Meridia group than placebo. It did not increase blood pressure but did increase heart rate from 80 to 87.

While serotonin syndrome is a theoretical concern, the European Agency for the evaluation of medicinal products concluded in a 2002 safety review that there was little evidence implicating Meridia as a culprit in a few reported cases (http://www.emea.eu.int/ pdfs/human/referral/451402en.pdf).

Prozac and Wellbutrin
It’s nice to be able to offer a “twofer” to patients who want to lose both depression and weight. Both Prozac and Wellbutrin qualify for this unusual status. While Wellbutrin appears to have gotten most of the press about being a weight loss agent lately, it turns out that our old stalwart Prozac has been studied even more intensively for this indication.

According to a recent meta-analysis by Agency for Heath Care Research and Quality (http://www.ahrq.gov/downloads/pub/evidence/pdf/obespharm/obespharm.pdf), six decent long term (at least 12 months) placebo-controlled studies of Prozac have been published, and the average extra weight loss achieved over placebo was about 7 lbs. Most of these studies used the relatively high dose of 60 mg QD.

While Wellbutrin can boast only three placebo-controlled studies, these were all larger studies than any of Prozac’s, with study populations ranging from 217 to 423. The average excess weight loss over 6-12 months was about 6 lbs, and the maximum recommended dose was used--400 mg QD.

Some of these studies excluded patients with major depression, and others didn’t. The weight loss effect seems to occur either way, which may come as a surprise to those of us who suspect that the “weight gain” of patients on SSRIs is an indirect result of improved mood. Apparently, with Prozac and Wellbutrin, you can improve mood and lose weight at once.

What’s Dexatrim?
Many of my patients over the years have either been taking over-the-counter Dexatrim or have asked me whether they should take it. Dexatrim is a weight loss product that used to contain a stimulant called phenylpropanolamine, or PPA. However, in November of 2000, the FDA publicized results of a study showing a higher risk of hemorrhagic stroke in women taking products with PPA, and it asked manufacturers to voluntarily stop using PPA in any product. While this fell short of an actual recall, the weight loss industry for the most part complied, and you’d be hard-pressed to find any PPA in drug stores today. You can still buy “Dexatrim,” but it is a reformulated “natural” product, with no PPA. For more information on this topic, see the FDA’s PPA information page at http://www.fda.gov/cder/drug/infopage/ppa/default.htm.