Daniel Carlat, MD
From The Carlat Psychiatry Report
Issue Links: Editorial Information | PDF of Issue
Daniel Carlat, MD Dr. Carlat has disclosed that he has no significant relationships with or financial interests in any commercial companies pertaining to this educational activity.
After innumerable articles and books on the importance of genetic variants of P450 enzymes, it appears that the clinical pay-off just might be at hand.

The P450 enzymes are in charge of Phase I metabolism, in which enzymes do various things to drugs in order to give them a net positive or negative charge. These charged metabolites are attracted to water (which is polar, having a negative end and positive end), and therefore are more quickly ushered out of the body via urine or stool.

Of course, these P450 enzymes can be inhibited by certain drugs, slowing down metabolism and increasing drug levels. Other drugs, called inducers, increase the population of these enzymes, causing serum drug levels to drop. This is the essence of drug-drug interactions.

But genetics can also affect the efficiency of metabolic enzymes.

Each of the P450 enzymes corresponds to a particular gene, and there is inter-individual variability, or “polymorphism,” in the genes coding for P450 enzymes.

To understand P450 polymorphisms though, you have to recall that our chromosomes (the carriers of our genes) come in pairs. As an example, the gene that codes for the 2D6 subfamily of the P450 enzyme is carried on our 22nd chromosome. Most people have two normal copies of the 2D6 gene – one on each of their copies of chromosome 22. This allows each copy to produce the enzyme, ensuring that we have a good supply and are able to biotransform substrates of 2D6 at the expected rate. Confusingly, the accepted jargon refers to these people as “extensive metabolizers” rather than “normal metabolizers.”

“Poor metabolizers,” on the other hand, do not have the 2D6 gene on either of their two chromosomes. When given a medication dependent on 2D6 for metabolism, one would suspect that they would have many side effects, because of excessive medication blood levels. Eventually, they are able to eliminate the drug via other enzymes, but it takes a long time. About 7-10% of most populations are poor metabolizers, but for Asians the figure is 1%.

On the other side of the spectrum are “ultrarapid metabolizers,” people who have extra copies of the 2D6 gene on one or both chromosome. They manufacture much more 2D6 than most people, so that they metabolize 2D6 substrates at a high rate. These patients would figure to need higher-than-standard doses of drugs. Of all ethnic groups, Ethiopians appear to be the most likely to be UMs (25%).

While there’s no question that poor metabolizers and ultrarapid metabolizers exist, it’s fair to wonder whether there are any clinically significant manifestations of these genetic variations in a typical psychiatric practice. As it turns out, a significant body of research literature has been quietly accumulating on this issue of clinical relevance, and the data are getting more convincing by the year.

In one study, 100 consecutive inpatients at a psychiatric hospital were given P450 genotype testing. As predicted, the ultrarapid metabolizers (UMs) did indeed have the fewest side effects, while the poor metabolizers (PMs) had the most side effects (Journal of Clinical Psychopharmacology 2000; 20:246-251). In this study, patients who were PMs or UMs specifically for drugs metabolized by the 2D6 enzyme tended to stay in the hospital longer and incurred higher costs, presumably due to the fact that more time was required to adjust dosages prior to discharge. 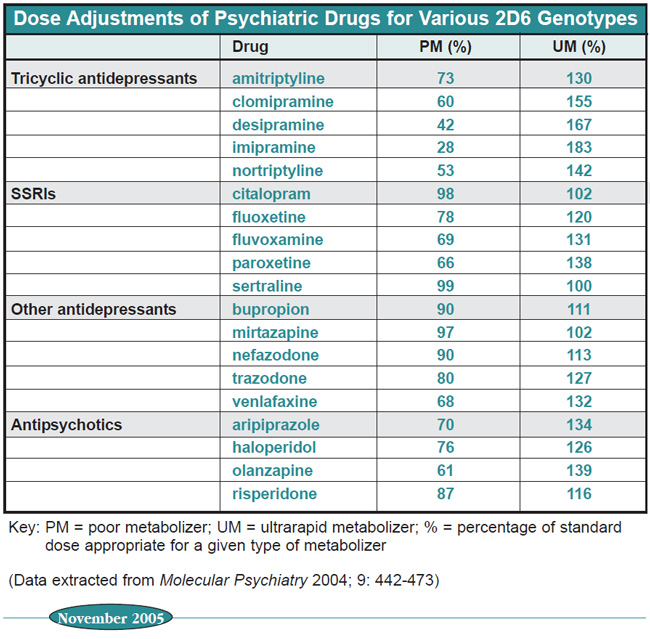 In a more recent study, also of hospitalized patients, patients who were PMs for 2D6 were over three times more likely to have required a switch of antidepressants than normal extensive metabolizers (EMs). Evidently, PMs reported more side effects, leading to changes in medications (Journal of Clinical Psychopharmacology 2005; 25:188-191). A study with a similar design focused on antipsychotic drugs and found that PMs were more than four times more likely to require antiparkinsonian medication than EMs (Pharmacogenetics 2002; 12:235-40).

It is now possible to order P450 genetic testing, though most insurance companies won’t pay for it. Private labs charge between $200-$600 depending on how many enzyme genotypes you request. One company, Genelex, has a particularly informative website (http://www.healthand dna.com/professional/pharmacogenetics. html); I mention them only because of their website, and I’m not endorsing them as any better than any other company out there. We’ll leave that to Consumer Reports.

Testing will categorize your patient into one of the three categories mentioned above (although some labs will add a category called “intermediate metabolizers,” which is essentially the same as “extensive metabolizers”). You can consult charts to help guide your dosing based on the category. For example, in the table above are recommended dose adjustments of selected psychiatric meds for patients of different P450 2D6 genotypes. The numbers represent the percentage of the usual dose that you should use.

Bottom-Line: For Whom Should You Order P450 Genotyping?
It’s unlikely that you will order this testing for every patient that you suspect might have a genetic polymorphism, because your clinical evaluation of efficacy and side effects will lead you to appropriate dose adjustments, particularly for medications where the differential is relatively small. What follows is a relatively conservative approach for deciding who should get tested: