Home » The MAOI-Cheese Interaction: A Primer

The MAOI-Cheese Interaction: A Primer

From The Carlat Psychiatry Report
Issue Links: Learning Objectives | Editorial Information | PDF of Issue
The MAOIs were first introduced in the mid-1950s, and for the first decade of their use, nobody had an inkling that combining them with cheese (or any other high tyramine food) could be dangerous. Over this period of time, there were an awful lot of patients combining cheddar with Nardil and Parnate, but hypertensive emergencies associated with this combination were rare.

The first published report hinting at a problem with MAOIs appeared in the Lancet in 1963 (Lancet 1963; 2:849). A psychiatric resident, Barry Blackwell, at Maudsley Hospital in London reported 12 patients who had hypertensive crises apparently related to the use of Parnate (11 of the patients) or Nardil (one of the patients). It took several years before an interaction with cheese was identified as the culprit and the mechanism was uncovered.

It turns out that cheese, and several other high protein foods, contain high amounts of the amino acid tyramine. While tyramine helps us build proteins, it causes a bit of mischief as well. Sometimes referred to as a “false neurotransmitter,” tyramine enters noradrenergic nerve terminals and displaces large amounts of norepinephrine, which enters the blood stream and causes vasoconstriction. In fact, when volunteers are given pure tyramine (available as a dietary supplement and marketed for body-builders), they usually experience a mild rise in blood pressure (J Clin Pharmacol 2003;43(6):604-609).

Nonetheless, dietary tyramine generally causes us no problems, because our GI tracts and our livers contain plenty of monoamine oxidase (MAO), which metabolizes tyramine, ensuring that any hypertensive effect is transient. But MAOIs cause a “double whammy” that can significantly increase blood pressure:

Whammy #1: MAOIs prevent the breakdown of tyramine in the gut, so lots of tyramine gets into the bloodstream and displaces NE from nerve terminals.

MAOIs, as their name implies, cause the enzyme monoamine oxidase (MAO) to be inactivated. MAO comes in two forms: the A form and the B form. MAO-A is the troublesome element in this story, because its normal function is to metabolize and break down the NTs serotonin, norepinephrine (NE), and to some extent dopamine (DA). MAO-B, on the other hand, is relatively specific for inhibiting the breakdown of dopamine. All MAOIs, with the exception of selegeline, specifically inhibit MAO-A. Selegeline (the active ingredient in EMSAM) inhibits MAO-B preferentially at lower doses, but at higher doses it loses this specificity.

Increased levels of these NTs is apparently what makes MAOIs effective antidepressants, and when no dangerous interactions enter the equation, MAOIs are tolerated better than tricyclic antidepressants (TCAs) and a bit worse than selective serotonin reuptake inhibitors (SSRIs), and are considered by some authorities to be more effective than either type (see, for example, APA’s PracticeGuidelines for the Treatment of Patients with Major Depressive Disorder, Second Edition).

Enter cheese. Certain cheeses, in addition to several other foods and beverages, contain high quantities of the amino acid tyramine. Why is tyramine so potentially troublesome?

If you look at the tyramine molecule, you will be struck by how similar it is to norepinephrine, one of the NTs most responsible for increasing our blood pressures. In fact, the precursor of tyramine, tyrosine, is also the chemical precursor of dopamine, epinephrine, and norepinephrine. All these molecules are similar, and MAO-A is involved in breaking them all down.

Because tyramine is so similar to NE, it can fool the neurons into releasing a lot of NE. In fact, tyramine is sometimes termed a “false neurotransmitter” because it gets actively transported into neurons and displaces NE, increasing NE levels in the blood stream (J Cardiovasc Pharmacol 2003;41(1):126-131). This, in turn, can result in vasoconstriction and hypertension. In fact, when volunteers (not taking MAOIs) ingest large amounts of pure tyramine (which you can buy as a dietary supplement), they experience a small rise in blood pressure, because it takes a little while for the body’s MAO to metabolize this extra tyramine (J Clin Pharmacol 2003;43(6):604-609).

Now imagine dumping tyramine into a body that has MAOIs on board. MAOIs irreversible inhibit MAO, meaning that they essentially kill off the enzymes, and the only way to replenish them is for the body to manufacture more of them. In this case, there is a double whammy of NE: first, the MAOI inhibits the breakdown of NE directly; and second, tyramine, acting as an independent false neurotransmitter, displaces NE from nerve terminals. (See Figure 1.) The combined effect floods the body with NE, potentially causing vasoconstriction, severe hypertension, and catastrophic sequelae like stroke.


Figure: "Double Whammy" Effect of Ingesting Tyramine with MAO on Board 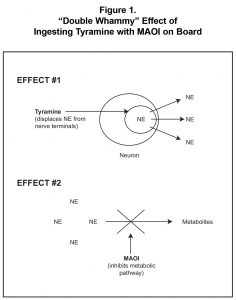 
Whammy #2: These artificially higher levels of NE cannot be quickly lowered, because MAOI inhibits the breakdown of NE (along with serotonin and dopamine) inside the neurons.

How do foods get to be high in tyramine? Via the action of bacteria on tyramine’s parent, tyrosine. Tyrosine is found in high amounts in many high protein foods. Bacteria such as Enterococcus and Lactobacillus contain tyrosine decarboxylase, which converts tyrosine to tyramine. Hence, foods that: (1) contain amino acids (e.g., have protein); and (2) have a lot of bacteria in them are precisely those foods that are likely to be loaded with tyramine. This is why we tell patients on MAOIs to eat foods when they are fresh. The longer cheese or meat is left in the fridge, the more bacteria, and hence the more tyramine.

The MAOI Diet
The forbidden foods on the MAOI diet used to read like a who’s who of all the things that our patients love to eat and drink: pizza, chocolate, brie, beer, fava beans with someone’s liver and a nice chianti (made famous by Anthony Hopkins in The Silence of the Lambs) and many others. But that list has been changing in recent years, largely due to the efforts of a group of researchers at the University of Toronto who have been measuring the tyramine content of foods commonly contraindicated. To the delight of many patients, they found, for example, that major food-chain pizzas had safe quantities of tyramine, including a Domino’s double-cheese, double-pepperoni pizza (J Clin Psychiatry 1999;60(3):191-193). The serving sizes analyzed were by no means stingy: a half of a medium pizza. Because most pizzas are made with fresh mozzarella, which contains little tyramine, it appears that patients taking MAOIs can indeed enjoy pizza dinners, at least when they are made fresh to order and when the only cheese they contain is mozzarella. Note that some gourmet pizzas may contain other, more flavorful (and thus more aged and higher in tyramine) cheeses and should be avoided (J Clin Psychiatry [letter] 2000;61(2):145).

At any rate, based on more recent findings, here is TCPR’s Updated MAOI Diet.


Foods that are quite risky:

(These are foods which, if patients really can’t live without them, and don’t mind playing a little Russian roulette with their blood pressure, can be eaten with caution)


Foods that are a little risky but probably safe in general:


Foods that are safe: