From The Carlat Psychiatry Report
Issue Links: Learning Objectives | Editorial Information | PDF of Issue
The discovery of the therapeutic effects of lithium in 1949 counts as one of the great examples of serendipity in the history of science. John Cade, an Australian psychiatrist, used lithium purely as a solvent to stop uric acid crystals from appearing in the urine of manic patients, which he was experimentally injecting into guinea pigs. Eventually he realized that this “solvent” was a dramatically effective treatment for mania, and the age of lithium was born.

Currently, lithium is FDA approved for both acute mania and for maintenance bipolar treatment, but not for bipolar depression. Lithium is dirt-cheap and the size of its database for efficacy in bipolar disorder is unmatched by any other medication, although many of these studies are old (Goodwin FK, J Clin Psychiatry 2002;63[suppl 10]:5–12).

Over the last decade, several studies have directly compared lithium with more modern medications, such as lamotrigine (Lamictal), olanzapine (Zyprexa), and quetiapine (Seroquel). A 2003 study compared lamotrigine to lithium in patients whose illness was in remission (after being initially stabilized on lamotrigine), and there was no significant difference between the two drugs in time to treatment intervention (Calabrese JR et al, J Clin Psychiatry 2003;64(9):1013–1024). In a 12-month study of olanzapine, patients with remitted bipolar depression were randomly assigned to olanzapine vs lithium, and olanzapine performed slightly better—30% of patients relapsed to depression versus 38.8% on lithium—but at the cost of significantly greater weight gain with olanzapine (Tohen M et al, Am J Psychiatry 2005;162(7):1281–1290).

Finally, quetiapine was compared with lithium in the EMBOLDEN I study of bipolar depression. Among these patients, quetiapine 600 mg, but not 300 mg, outperformed lithium on the MADRS depression scale at the eight week end-point (Young AH et al, J Clin Psychiatry 2010;71(2):150–162).

Summing up these and other data, it seems that lithium works at least as well as other agents for bipolar disorder prophylaxis, though some may argue that olanzapine and quetiapine are slightly more effective for bipolar depression.

How to Start Lithium
Before starting your patient on lithium, order the following baseline labs: thyroid stimulating hormone (TSH), creatinine (Cr), electrolytes, liver function tests (LFTs), and complete blood count (CBC) with platelets. While electrolytes, LFTs, and CBC with platelets are not strictly necessary for monitoring lithium, I usually order them just in case the lithium doesn’t work or isn’t tolerated and I have to go to another mood stabilizer, like valproic acid (Depakote) or oxcarbazepine (Trileptal).

A lot of patients are turned off to lithium because they were once too aggressively dosed and developed side effects leading them to refuse to take lithium thereafter. So I start slow and use lithium carbonate 300 mg at bedtime (QHS). Some clinicians prefer to start with one of the slow release versions of lithium, such as Lithobid or Eskalith CR, but I choose LiCO3 for two reasons. First, it is a generic formulation and therefore less likely to be challenged by insurance companies. Second, short acting lithium allows for lower serum levels between doses, which theoretically gives the kidneys a periodic “break” from exposure to the nephrotoxic effects of lithium.

I prefer evening dosing because peak levels occur one to two hours after dosing (ie, while the patient is sleeping), so he or she is less likely to be bothered by side effects like tremor or cognitive blunting. After you start lithium, you can increase the dosage by 300 mg every three to seven days as tolerated. You’ll probably end up between 900 mg and 1,500 mg QHS for most patients.

Try to get the lithium level up to 0.8mEq/L or so; although in the outpatient situation, I am likely to accept lower serum levels in the interest of decreasing side effects. Make sure to instruct patients to have blood drawn about 12 hours after his or her last dose.

Lithium citrate is a liquid (equivalent to 300mg/5mL) and is perfect for fine tuning the dosage. Very detail oriented patients often really like that extra bit of control. If the situation is more acute (such as an incipient manic or mixed episode), I usually start a sedating atypical like olanzapine or quetiapine and add in lithium gradually, because lithium may take weeks to work in severe mania.

Check lithium levels, TSH, and Cr after one week, at one to two months, then every six to 12 months thereafter. Many labs will also report the “eGFR,” which is the estimated glomerular filtration rate—this is calculated by a formula comprised of the Cr level, the patient’s age, race, and sex. It is generally considered a more accurate measure of kidney function than the simple Cr level, and it is the value that I focus on. While some clinicians check thyroxine (T4) in addition to TSH, I usually don’t bother, my rationale being that the patient’s primary care provider will need to order a more extensive array of thyroid function tests anyway if the TSH is abnormal.

Dealing with Common Side Effects

GI discomfort. Patients will often complain of various GI side effects such as upset stomach or nausea.
Potential remedies: Split the dosing to twice daily (BID) or three times daily (TID); take the medication at the end of meals when there is food in the stomach; switch to a long-acting formulation; or switch to Li Citrate syrup.

Tremor. Lithium induced tremor is finer than the coarse 4 to 6 Hz tremor in parkinsonism, and patients don’t like it because it makes them look like they’re nervous all the time.
Potential remedies: Use propanolol (Inderal LA) 60 mg every morning (QAM) or propranolol 20 mg BID to TID as needed.

Polyuria/excessive thirst. Educate your patients about the danger of dehydration and reassure them that increased urine output does not mean that they are more likely to suffer kidney damage.
Potential remedies: Dose it all at night; try hydrochlorothiazide 12.5 mg daily. (If you do this, however, you should decrease the lithium dosage a bit, and monitor lithium levels more closely.)

Memory problems. “Mental slowness” is a common complaint of patients on lithium.
Potential remedies: No proven remedy, but you can see if dosing QHS helps. Also make sure you have checked TSH as lithium induced hypothyroidism can be a cause of mental slowing.

Weight gain. Atypical antipsychotics generally cause more weight gain than lithium, so if the patient is on an atypical, I will reduce that first. In addition, bipolar depressive episodes often lead to overeating, so it pays to take a close look at your patient’s diet and activity level. Advise patients with increased thirst to minimize their intake of sugared drinks, as these can add a lot of calories.
Potential remedies: The usual remedies apply for weight gain: a dose decrease, a medication switch, diet, and exercise. If your patient is getting side effects sporadically, ask him or her about their use of ibuprofen or other NSAIDs, since these commonly used OTC medications can bump lithium levels significantly, though transiently.

Uncommon side effects
Lithium can damage the kidneys, but generally only after years or decades of use (H Bendz et al, Nephrol Dial Transplant 1994;9(9):1250–1254; Bassilios N et al, Nephrol Dial Transplant 2008;23(2):562–565). Risk factors appear to be a history of frank lithium toxicity, higher dosage of lithium, and long duration of lithium therapy. If the eGFR dips below 60mL/min, I refer the patient to an internist.

What about lithium’s effect on the heart? In general, severe, symptomatic sinus node dysfunction is quite rare (Rosenqvist M et al, Br Heart J 1993;70:371–375). Based on this, I get a pre-lithium EKG only in patients with pre-existing cardiac disease, and I order an EKG in any lithium treated patient who has new onset dizziness or fainting.

Saying Goodbye to Lithium
If you have to stop lithium, please do it slowly. Studies indicate that tapering lithium over less than 30 days increases rates of relapse (Faedda GL et al, Arch Gen Psychiatry 1993;50(6):448–455). So take your time: decreasing by 300 mg per month is reasonable for most patients.

Will lithium lose its efficacy if you stop it and then try to restart it at a later date? Probably not, but the issue is open to debate. (For example, see Coryell W et al, Am J Psychiatry 1998;155(7):895–898.) I like to tell patients that it’s easier to prevent a relapse than to treat an episode once it starts (the old “an ounce of prevention is worth a pound of cure” dictum).

Finally, whether the patient is starting, continuing, or stopping lithium, an educated spouse or family member can be key in navigating the various treatment and side effect issues—so take the time to include them in some of your patient visits. 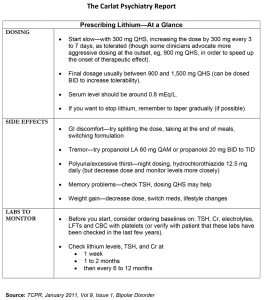