Risk assessments for violence have become less and less the sole domain of forensic psychiatrists. One of the consequences of the de- institutionalization movement that began in the 1960s was the increasing acuity of many patients seen in the community. The ability to conduct a methodical and rational risk assessment to protect our community from a handful of our patients—and a handful of our patients from their own actions—has become more relevant now than ever.

Types of Risk Assessment Without even knowing it, you already assess each patient’s potential for violence simply by using your intuition, judgment, and your catalog of past experiences. At a more quantitative level, actuarial tools like questionnaires and surveys can also evaluate risk. Ideally, a combination of professional skill and empirical knowledge is best (see, for instance, Dolan M and Doyle M, Br J Psychiatry 2000;177:303–311).

Using Judgment Several risk factors for violent behavior have been identified and validated. The table “Twenty Risk Factors for Violence” lists key risk factors worth evaluating in every patient. 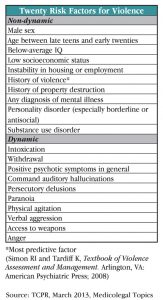 Despite media reports that tend to overstate the link between mental illness and violence, the truth is that mental illness does increase risk but only slightly. In reality, mentally ill individuals are much more likely to be victims of violence than perpetrators (Hiroeh U et al, Lancet 2001;358(9299):2110–2112).

Using Tools We may determine that clinical judgment just isn’t enough for some of our patients, and we’d like to support our judgment with testing. The issue then becomes finding the right tool for the job.

The Psychopathy Checklist-Revised (PCL-R) was originally designed by Robert Hare to diagnose psychopathy. It has been widely used to attempt to predict violent behavior. The PCL-R uses a three-point scale to address 20 items evaluated in a semi-structured interview. The entire interview may take up to three hours. A later iteration of this test, the Psychopathy Checklist: Screening Version (PCL:SV), is a 12-item subset that takes only about 90 minutes. The massive MacArthur violence risk assessment study found a stronger association between the PCL:SV results and later violence than any other of the 134 variables evaluated in that study. (For a list of publications analyzing the MacArthur violence risk assessment data, see www.macarthur.virginia.edu/risk.html.) The PCL-R requires training, which is available from various private providers.

Arguably, psychopathy may be too narrow a criterion for predicting violence. The Historical, Clinical, Risk Management-20 (HCR-20), a 20-item instrument completed via guided interview, evaluates the patient’s clinical presentation and includes a chart review and collateral sources to look at historical factors. It incorporates variables regarding the patient’s past actions, present condition, and future outlook. It’s regarded as the instrument of choice in many circles and has been demonstrated to show added predictive validity when compared to the PCL:SV alone (Douglas KS et al, J Consult Clin Psychol 1999;67(6):917–930).

The Violence Risk Appraisal Guide (VRAG) is a 12-item actuarial tool designed specifically to predict general violence risk. This tool was initially developed in a population of men charged with violent crimes. It successfully predicts misconduct while incarcerated, as well as recidivism (Harris GT et al, Law and Hum Behav 2002;26:377–395).

The Classification of Violent Risk (COVR) scale consists of a chart review and 10-minute interview. It draws upon a number of factors thought to increase risk for violence, particularly in psychiatric inpatients soon to be discharged to the community. It’s a computerized, “adaptive” test, in which the specific questions presented depend on answers to previous questions. The COVR can be used in adults ages 18 to 60 and requires no special training to administer, although the cost may be prohibitive for small practices (Monahan J et al, Psychiatric Serv 2005;56(7):810–815).

Recent events remind us that violence is far from limited to the adult population. Similarly designed and scored to its adult counterpart, the Psychopathy Checklist: Youth Version (PCL:YV) is a 20-item instrument based on a semi-structured interview with the patient, review of documentation, and interview with parent or guardian. Several large studies have validated its predictive value, with a 10-year retrospective demonstrating that high-scoring adolescents were three times more likely to commit violent crimes than those who scored low (Gretton HM et al, J Consult Clin Psychol 2004;72:636–645).

One of the largest meta-analyses of risk assessment tools found the Structured Assessment of Violence Risk in Youth (SAVRY), a 24-item structured clinical interview, to show the highest rates of predictive validity, surpassing any of the adult tools mentioned above (Lodewijks HP et al, Int J Law Psychiatry 2008;31(3):263–271).

Many of the formalized tests and instruments described here require specialized training or come with a high price tag, but using clinical judgment to conduct a detailed risk assessment for violence does not (see “Fighting in the Trenches” in this issue). Even though we’re talking about rare events—and, as such, the positive predictive value of such assessments may be quite low (Large M and Mullin K, Eur Psychiatry 2010;26(2):132)—the costs to society may be great.

It helps, then, to be aware of the validated risk factors, separate these from stereotypes, and intervene appropriately.

“He seemed a little odd, but…”

“She was kind of hard to get to know…”

TCPR’s Verdict: Our patients and community rely on us to track how and why our patients are at risk for violence each time we meet. It helps us monitor safety, it helps us tailor treatment to address identified risks, and it’s how we learn to differentiate between someone who is a potential threat to the public and someone who is just, well, a quiet man.
General Psychiatry
KEYWORDS practice_tools_and_tips
Douglas Tucker, MD
More from this author
Mikel Matto, MD
More from this author