Home » A Primer on MAOIs

A Primer on MAOIs

From The Carlat Psychiatry Report
Issue Links: Learning Objectives | Editorial Information | PDF of Issue
Monoamine oxidase inhibitors (MAOIs) may be particularly beneficial for our patients with atypical depression, social anxiety disorder, and treatment-resistant depression (TRD). Yet, a lack of familiarity with the drugs and propagation of outdated dietary restrictions have caused many of us to shy away from prescribing MAOIs.

The older MAOIs, tranylcypromine, phenelzine, and isocarboxazid, cause irreversible inhibition of both MAO-A and MAO-B. That means they increase norepinephrine, serotonin, and dopamine. The dopaminergic effects are strongest for tranylcypromine.

Selegiline transdermal (Emsam), the newest MAOI on the market, is also irreversible, but it has a slightly different pharmacology. At low doses (6 mg/day), it is selective for MAO-B, but it becomes unselective at the higher doses often needed for depression (9 mg/day–12 mg/day). Theoretically, the transdermal absorption of the drug should minimize the effect on tyramine in the gut, but MAOI dietary restrictions are still recommended at any dose over 6 mg/day.

For completeness, we should mention one other agent: moclobemide is a reversible, MAO-A selective MAOI. It isn’t available in the US, but it is approved in Canada. Because it is specific to MAO-A, there are no dietary interactions, but it also does not appear to be as effective as the irreversible, non-selective MAOIs for depression.

How effective are MAOIs?
Many studies have compared MAOIs with tricyclic antidepressants (TCAs). A meta-analysis published in 2006 concluded that older MAOIs might be more effective than TCAs for atypical depression (Henkel V et al, Psychiatry Research 2006;141:89–101). In another study of 47 patients whose depression had failed to respond to at least 2 TCAs, 50% had a response to tranylcypromine (Nolen WA et al, Acta Psychiatr Scand 1988;78(6):676–683). Multiple studies have also found MAOIs to be effective for social anxiety and dysthymic disorder, and pilot data suggests benefits in panic disorder, posttraumatic stress disorder, and bulimia.

Adverse effects
Adverse effects are often cited as a reason to avoid MAOIs. However, the adverse effect profiles of the older MAOIs tend to be similar in severity and frequency to those of the selective serotonin reuptake inhibitors (SSRIs). Although they cause more hypotension than SSRIs, MAOIs are less likely to cause gastrointestinal problems. All 3 older MAOIs can cause a moderate amount of agitation, insomnia, weight gain, and sexual dysfunction.

What about the selegiline patch? Compared with SSRIs and older MAOIs, this agent has a more attractive side effect profile, with minimal weight gain, fatigue, and sexual dysfunction. The most common adverse reaction is skin irritation, which can be managed by rotating the application site or using hydrocortisone cream (allow it to dry before applying the patch).

Food interactions
Food interactions are another common reason that physicians avoid MAOIs. Unfortunately, most of the published material on dietary restrictions derives from an era where tyramine concentrations could not be accurately measured in food. Since 2000, improvements in technology have clarified which foods truly contain a concerning amount of tyramine and which foods are perfectly safe in normal serving sizes. For further details about food interactions with MAOIs, an extensive review of current literature is available online at https://psychotropical.info/wp-content/uploads/2017/12/MAOI_diet_drug_interactions_2016.pdf.

Table: Available MAOIs for Depression in the US 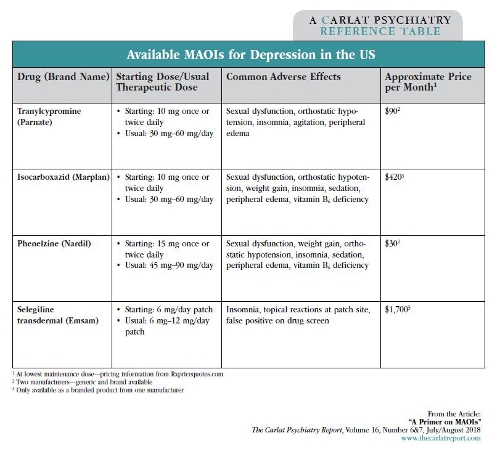 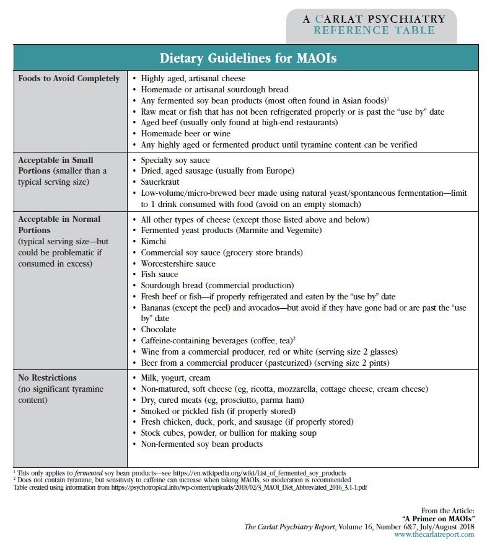 
Drug interactions
MAOIs have two dangerous drug interactions: hypertensive crisis and serotonin syndrome. Drugs that cause these include over-the-counter agents (L-tryptophan, St. John’s wort, and decongestants containing phenylephrine, pseudoephedrine, or dextromethorphan), prescription medications (antidepressants, buspirone, psychostimulants, fenfluramine, meperidine, and possibly carbamazepine and cyclobenzaprine), and drugs of abuse (cocaine, amphetamines, MDMA, and excessive alcohol). Due to the potential for interactions with pain and anesthetic agents, surgery requires caution. Ziprasidone is the lone antipsychotic that cannot be combined with an MAOI.

To prevent serotonin syndrome, a washout period is required between stopping an antidepressant and replacing it with an MAOI. Generally, the old drug should be tapered down over 1–2 weeks (fluoxetine and vortioxetine can be stopped abruptly because of their long half-lives). Once the old drug is completely stopped, you should allow for a washout period equivalent to 5 half-lives of the old drug before starting the MAOI. Benzodiazepines can be used to relieve any distress that arises during that drug-free period.

Starting a patient on an MAOI

Who is a candidate for an MAOI?
Patients who have failed several trials of other agents for major depression, as well as those with atypical depression, panic disorder, or social anxiety disorder, are candidates for MAOIs.

Which is the best MAOI to start with?
Tranylcypromine and phenelzine are often considered the first-line choices in the MAOI class, but opinions vary, and we lack extensive head-to-head comparison data. Phenelzine is the best-studied MAOI for atypical depression and is currently the most affordable MAOI. Other experts recommend tranylcypromine, which is less likely to cause weight gain or sedation than the other 2 classic MAOIs.

Transdermal selegiline may have a different niche. Although its favorable side effect profile makes it an attractive option, it lacks research in the types of depression that typically draw us toward MAOIs: atypical and TRD.

Dosing
Start at the lowest dose and titrate slowly (every 3–7 days). But remember that MAOIs have a dose-dependent response, so if the patient has not achieved an adequate response to initial therapy, a higher dose might help.

Managing side effects
Orthostasis can be a problematic side effect. Remedies include dose reduction, increasing fluid intake (8 glasses of water a day), support stockings, and lowering concurrent antihypertensives. In severe cases, fludrocortisone can be used (0.5 mg 1–2 PO Q6hr PRN).

Insomnia may improve by shifting the dose to morning or using a hypnotic (all the FDA-approved options are safe with MAOIs except for doxepin/Silenor).

Discontinuation
Rarely, abrupt discontinuation of an MAOI triggers psychotic delirium, so they should be tapered slowly over 2 weeks. Wait another 2 weeks after discontinuation before lifting the dietary and drug restrictions or starting a new antidepressant (including another MAOI).

What about augmentation?
Therapy with MAOIs can be augmented with several drugs. Lithium has the most evidence, and second-generation antipsychotics (except ziprasidone) can also be used. Augmentation with other psychotropics is more controversial, but a literature review suggests it may be feasible with careful monitoring. The evidence is sparse, but the best studied options are the psychostimulants, trazodone (for insomnia), and certain tricyclics (especially trimipramine). Highly serotonergic medications (eg, SSRIs, SNRIs, clomipramine) should be avoided completely (Thomas SJ et al, Pharmacotherapy 2015;35(4):433–449).

TCPR’s Take
When patients have not recovered fully on an antidepressant, MAOIs are worth considering. In atypical depression, MAOIs hold the unique distinction of being more effective than another class of ADs. They should always be part of the conversation in treatment-resistant depression and treatment-resistant anxiety disorders.

MAOIs are much simpler to use than their reputation suggests. They are reasonably well-tolerated, and their drug interactions and dietary restrictions are not overly burdensome for most of the patients who take them.
General Psychiatry