Chris Aiken, MD
From The Carlat Psychiatry Report
Issue Links: Learning Objectives | Editorial Information | PDF of Issue
Chris Aiken, MD Editor-in-chief of The Carlat Psychiatry Report Practicing psychiatrist, Winston-Salem, NC.
Treatment-resistant depression (TRD) is not untreatable. The challenge is to keep hope alive and the patient engaged in recovery. “You deserve, and can expect, a full recovery,” I’ll often tell patients, “but we’re going to need more than medications to get you there.” I’ll then offer a choice: to either start weekly psychotherapy or make a lifestyle change—or both.

Lifestyle factors influence the actions of antidepressants down to the cellular level. Animal and human studies consistently find that aerobic exercise, social interaction, and a stimulating environment enhance both the clinical and biological effects of antidepressants, such as by increasing neurotrophic factors and synaptic plasticity. In some studies, antidepressants have failed to work unless the right environmental factors were in place (Rief W et al, Neurosci Biobehav Rev 2016;60:51–64).

That model of depression can help engage patients who have been lulled into passivity as they wait for the right medication to change their brain chemistry. After describing the rationale, I’ll offer patients a menu of options and advise them to select only one. I’ll say, “Your motivation is limited, so let’s invest it in something we know can make your medications work better.”
The following are lifestyle changes I recommend to my TRD patients. More details, including patient-ready brochures, are at moodtreatmentcenter.com/lifestyle.

Brisk walking
I tell patients, “I don’t want you to exercise—that’s too difficult. Just start walking briskly.” Fortunately, the type of exercise with the best evidence in depression is relatively mild: less than a jog but more than a walk. The ideal dose is 30 minutes a day or 45 minutes every other day. It works as well as an antidepressant, augments antidepressants, and improves treatment-resistant depression (Mura G, CNS Spectr 2014;19:496–508). I’ll often start by prescribing a lighter dose, such as 10 minutes a day. Patients who prefer the indoors have found sites such as WalkAtHome.com helpful. 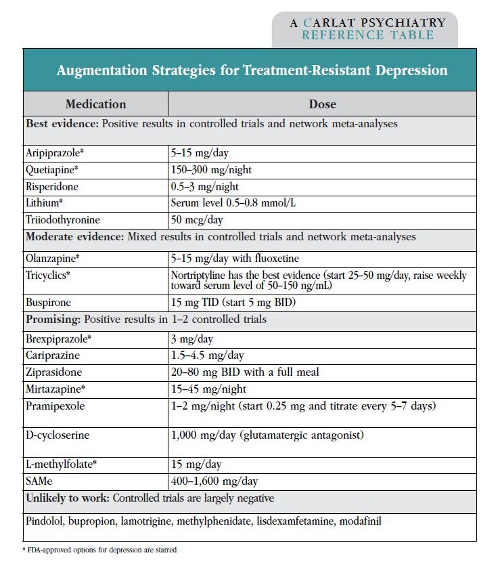 
A slow forest walk
If a brisk walk is too intimidating, a stroll in the woods may provide similar relief. In one study, a 90-minute forest walk reduced ruminative thinking more than a similar urban walk. It also lowered neural activity in an area of the brain involved in behavioral avoidance: the subgenual prefrontal cortex (Bratman GN et al, Proc Natl Acad Sci 2015;112(28):8567–8572). Additionally, walking in the woods improves cognitive performance better than a walk in the city or suburbs. Other natural environments, such as gardens and bodies of water, have similar effects.
Regular wake times

Cognitive behavioral therapy for insomnia (CBT-i) is a first-line treatment for insomnia, and about a dozen clinical studies have found it effective for depression as well (Cunningham JE et al, J Psychosom Res 2018;106:1–12). Online CBT-i can also work (myshuti.com has passed in a clinical trial) and there’s a free app-guided version sponsored by the VA (mobile.va.gov/app/cbt-i-coach). If patients are unable to take on the full therapy, I’ll advise them to stick to the most important behavioral piece: rising out of bed at the same time each morning.

Dawn simulator
Ask depressed patients how long it takes them to feel fully awake, and they may answer in terms of hours rather than minutes. That’s due to a little-known symptom of depression called sleep inertia, and it improves with a dawn simulator. These devices create a virtual sunrise in the bedroom, and they worked for winter depression in 6 small, controlled trials (Danilenko KV et al, J Affect Disord 2015;180:87–89). They are slightly less effective than a lightbox but much easier to use, and they can help patients stick to a regular wake time.

Mediterranean diet
In 2017, following 2 controlled trials from Australia (Parletta N et al, Nutr Neurosci 2017:1–14), we saw the first clinical evidence that dietary change can improve depression. Based on the Mediterranean diet, which can enhance neuroplasticity and reduce inflammation, the intervention improved depression with a large effect size (see “An Antidepressant Diet,” TCPR April 2018).

Mindfulness or breathing meditation
Along with brisk walking, these interventions work not only in depression, but in treatment-resistant populations as well (Sharma A et al, J Clin Psych 2017;78:e59–e63). Granted, they are more likely to work if they are undertaken with a therapist or instructor, but patients who are unable to do that may find some benefit through regular independent practice. Guided mindfulness is available through CDs, music streaming services, and apps. An expert review of mindfulness apps gave high marks to Headspace, Smiling Mind, iMindfulness, and Mindfulness Daily (Mani M et al, JMIR Mhealth Uhealth 2015;3:e82).

For breathing meditation, the forms with the best evidence are rhythmic breathing and Sudarshan Kriya yoga. Among apps, Breathe2Relax is a useful tool.

Antidepressant apps
I have been skeptical of therapy by smartphone, but there is more and more evidence that it can make a difference even in the absence of a therapist (see “A CBT App for Refractory Depression,” page 10). For the motivated patient who can’t afford therapy, apps are a helpful coach, guiding changes of a more complex nature than the ones I’ve listed above. Among apps with a CBT focus, the following have some research support: Moodivate, Happify, Stress Free, Virtual Hope Box, and Intellicare (Rathbone AL et al, J Med Internet Res 2017;19:e399).
General Psychiatry
Chris Aiken, MD