Chris Aiken, MD
From The Carlat Psychiatry Report
Issue Links: Learning Objectives | Editorial Information | PDF of Issue
Chris Aiken, MD Editor-in-Chief of The Carlat Psychiatry Report Practicing psychiatrist, Winston-Salem, NC. Dr. Aiken has disclosed that he has no relevant financial or other interests in any commercial companies pertaining to this educational activity.
In the May 2018 issue of TCPR, we wrote about using benzodiazepines for anxiety and other disorders, and we got some reader feedback that we did not provide a thorough enough review of medication risks. So, in a follow-up article this month, I will focus on two groups where benzos pose the greatest risks: opioid users and the elderly.

Benzodiazepines and opioids
An urgent call comes in from a 48-year-old woman with panic disorder. Her anxiety has worsened, and she would like to raise her clonazepam, which she has taken reliably since gaining sobriety from alcohol 15 years ago. She also has sleep apnea and chronic back pain, and recently added hydrocodone to a steady regimen of NSAIDs and baclofen. Should you raise the benzo? In this era of the opioid epidemic, the answer is not so clear.

Benzodiazepines are rarely fatal in overdose, but they can be deadly when combined with opioids or alcohol. Opioids change the way that benzodiazepines act, and the FDA recently added a black box warning about their combined use. The problem is that both drugs suppress breathing, but they do so in different ways: benzos and alcohol through GABA-A inhibition, opioids in the medulla. The effect is much like a stereo system. Unplug one speaker, and you can still hear the music. Unplug both, and breathing stops.

Suicide and excessive substance use are not the driving forces in these overdoses. Most of the deaths are accidental, and they can happen even when the medications are taken as prescribed. Part of the problem is that opioids and benzos create a synergistic euphoria that’s greater than the sum of its parts. In practice, this means patients are drawn to combine their opioids with benzos or alcohol, and both substance abusers and non-abusers tend to do so at equally high rates (Saunders KW et al, J Pain 2012;13:266–275).

Just how much do benzodiazepines raise the risk of opioid-related fatalities? About 2–4 fold, according to a study of over 100,000 veterans. The risk rises as the dose of the benzo goes up but does not change with daily vs PRN dosing (Park TW et al, BMJ 2015;35:1–8).

The following is how I deal with patients who are taking opioids and requesting benzos:

Print an agreement
Print a treatment agreement specifying your policies and the risks of combing benzodiazepines with opioids, alcohol, or other sedatives. I’ve posted an example agreement at www.moodtreatmentcenter.com/benzo.pdf. Two key points: no early refills of benzodiazepines and no benzo prescriptions from multiple physicians.

Check your state’s controlled substance database
You’ll be able to check on opioids, benzodiazepines, stimulants, and other controlled substances. But you won’t find information on uncontrolled sedatives, such as muscle relaxants and sedating antipsychotics. Compared to opioids, these sedatives are less of a threat, but the FDA has warned against combining them with benzos as well.

Estimate the risk
Licensing boards are starting to scrutinize prescriptions of benzos and opioids, but they’ve offered little guidance about when to avoid their combination. Pain specialists have identified groups at elevated risk for overdose, and I’ve combined that wisdom with recommendations from the Centers for Disease Control in the table on page 3.

In addition to their overdose risks, benzodiazepines also raise concerns about addiction. Former opioid abusers are the most vulnerable, and a benzodiazepine can set off a cycle of both benzo and opioid abuse in these patients. Recovering alcoholics fare better. Benzodiazepines did not lead to relapse, tolerance, or new addictions when given to former alcoholics over 12 years in a large, naturalistic study (Mueller TI et al, Alcohol Clin Exp Res 2005;29:1411–1418).

Involve the family
Family members are often the first to recognize sedative misuse. When patients have cognitive limitations, I’ll ensure that a caregiver is available to responsibly dispense the medications. The opioid antagonist naloxone can safely reverse a combined benzo-opioid overdose, and it’s strongly recommended for chronic opioid users. It’s also highly underutilized, so I’ll often write for it even though I don’t prescribe opioids (Naloxone 2 mg/2 ml pre-filled Luer lock–ready needleless syringes with a mucosal atomizer or Narcan nasal spray 4 mg). For more guidance on naloxone co-prescribing, check the resources available at ­PrescribeToPrevent.org. The benzo antagonist flumazenil, however, is not safe for home use because it carries a risk of seizures.

Benzodiazepines in the elderly
Your 82-year-old patient comes to his appointment using a cane to climb the stairs. He has been on citalopram for several years, but over the past few months his anxiety has worsened. You’ve tried increasing the SSRI but to no effect. You are convinced that a low dose of a benzodiazepine will do the trick for him, but you just read yet another confusing meta-analysis purporting to show that benzodiazepines are bad for the elderly, potentially causing falls and dementia. Are the benefits for this patient worth the risks?

There are two major risks that we worry about in the elderly: falls and cognitive impairment. Let’s look at the evidence for each in turn.

Falls lead to fractures, and fractures can be fatal, particularly those involving the hip. Benzodiazepines increase the risk of falls in the elderly by 1.5-fold, according to a meta-analysis of 18 studies. The data are not conclusive, as there’s also evidence that benzos are prescribed more often to patients who are at risk for falls. However, these studies attempted to control for those confounders, and benzos have a known, dose-dependent effect on postural stability and balance. To improve safety, emphasize caution during the first 2 weeks of treatment, as that is when the risk is highest. Lower doses also reduce the fall risk, but the data are conflicting as to whether short- or long-acting benzos are more dangerous. Switching to Z-hypnotics, however, does not seem to be the answer, as they impart a similar risk (Donnelly K et al, PLoS One 2017;12(4):e0174730).

While the fall risk peaks early, the cognitive side effects of benzos tend to worsen over time. A recent meta-analysis found that long-term users were impaired across a dozen cognitive domains compared to patients with chronic anxiety who did not take benzodiazepines. Judging by their effect sizes, which were in the moderate to large range, those impairments would be apparent to the casual observer. Cognition gradually improves after the drug is discontinued, but some impairment is still detectable up to a year later (Crowe SF and Stranks EK, Arch Clin Neuropsychol 2017;doi:10.1093/arclin/acx120).

Among those impairments is the ability to form new memories, which can get in the way of exposure-based psychotherapy (Rothbaum BO et al, Am J Psychiatry 2014;171:640–648). Processing speed, attention, and the ability to multi-task are all reduced by benzodiazepines, an effect that can be fatal on the highway. Benzodiazepines raise the risk of car accidents 2–4 fold, depending on the dose, and the affected drivers are usually unaware of their impairment (Brandt J et al, Drugs R D 2017;17:493–507).

Table: Benzos and Opioids: When to Avoid Their Combination 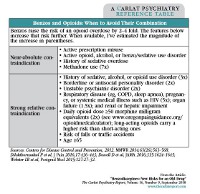 
Can these cognitive problems progress to dementia? The answer is a tentative yes. Nine out of 10 studies have concluded that benzodiazepines raise the risk of developing dementia by 1.5–1.8 fold. None of those data are controlled, leaving open the possibility that the risk is better explained by the tendency to prescribe benzos to patients with more severe symptoms. Still, the association holds up when adjusted for confounders like symptom severity, and the risk of dementia rises with longer use, higher dose, and longer half-lives, suggesting the drug itself may be the culprit (Brandt J et al, Drugs R D 2017;17:493–507).

Other risks
Benzodiazepines have also been linked to cancer, exacerbation of respiratory disease, pancreatitis, and infections, but those links are more tenuous; the studies lack adequate controls or suffer from inconsistent results (Brandt J et al, Drugs R D 2017;17:493–507).

Clarify the benefits, minimize the risks
Even when the risks are high, benzos may still be justifiable when their benefits are meaningful and alternatives have failed. Speaking of alternatives, antidepressants often require a longer trial (8–12 weeks) and a higher dose to treat anxiety. Cognitive behavioral therapy (CBT) is great when available, but there are other therapeutic approaches worth considering for anxiety, such as mindfulness, psychodynamic therapy, progressive muscle relaxation, deep breathing, yoga, sleep hygiene, and even caffeine reduction.

Is there a good reason to continue the use of a benzodiazepine? Their clearest indication is in panic disorder, with generalized and social anxiety disorders a close second. Infrequent use for simple phobias and short-term use for acute anxiety or insomnia are also acceptable. After that, their use becomes less defensible, particularly if the patient is elderly or is taking an opioid.

When benzodiazepines can’t be discontinued, their risks can be minimized. I’ll use the lowest possible dose for the shortest period of time and prefer benzos with a short half-life and few metabolites. Among the benzodiazepines, oxazepam has the lowest fatality index and the lowest potential for abuse, perhaps because of its slow onset, which builds over 3 hours instead of the 0.5–1.5 hours typical for this class (Buckley NA et al, BMJ 1995;310:219–221; Griffiths RR, J Clin Psychiatry 2005;66 Suppl 9:31–41). Lorazepam is second in terms of those safety metrics, while clonazepam, alprazolam, and diazepam are the worst.

TCPR Verdict: While ­benzodiazepines’ benefits are clear, it’s difficult to appreciate their risks through clinical experience alone. Adverse events are either too rare, as in overdose deaths, or too insidious like cognitive decline. Sometimes those risks will steer us away from benzodiazepines, particularly when the patient is elderly, taking an opioid, or in recovery from an opioid use disorder. Outside of those groups, benzodiazepines are good options for severe anxiety disorders and are usually less harmful than the disorders they treat.
General Psychiatry
KEYWORDS benzodiazepines
Chris Aiken, MD

Antidepressants and Bipolar at the Mood Summit