Chris Aiken, MD Editor-in-Chief of The Carlat Psychiatry Report. Practicing psychiatrist, Winston-Salem, NC. Dr. Aiken has disclosed that he has no relevant financial or other interests in any commercial companies pertaining to this educational activity. 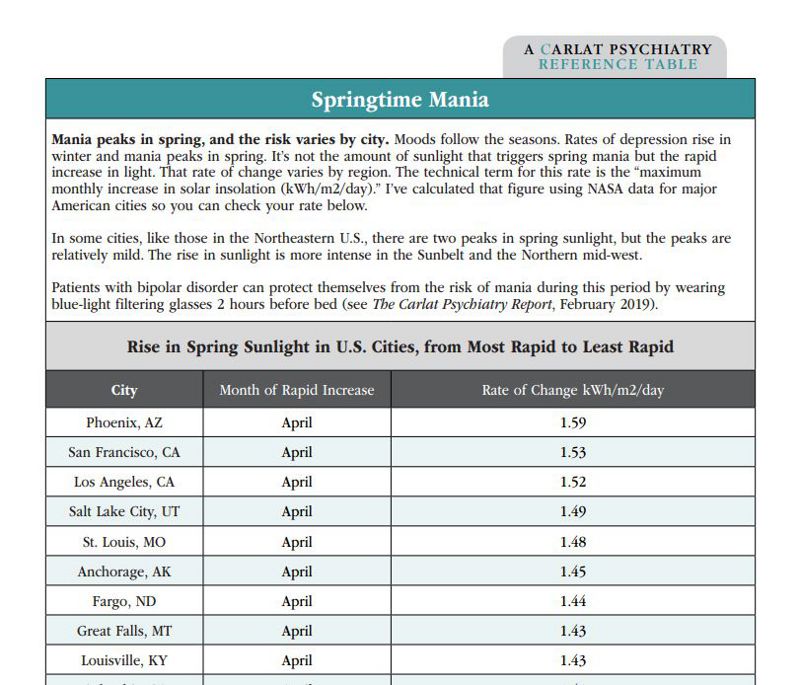 If dark nights can treat mania, can too much sunshine destabilize it? Yes and no. Mania is linked to rapid changes in sunlight, but not to the amount of light itself. Mania peaks in early spring when there’s a steep rise in sunlight. By the time the longest day of the year comes along in late June, there’s no longer a detectable increase in mania (Parker G et al, J Affect Disord 2018;226:72–76).

In some regions, this change in spring sunlight is particularly dramatic, and the onset of bipolar disorder tends to be earlier in patients who grew up in those areas (Bauer M et al, Acta Psychiatr Scand 2017;136:571–582). The spring effect is strongest in the Sunbelt and in the Northwest and Northern Midwest. The flux in sunlight peaks between March and April in most areas of the US, but in the Northeast, from DC to Maine, it’s between April and May. Click here for a PDF table showing sunlight peaks.

As a bipolar specialist, my phone rings off the hook when spring arrives, but the urgency has cooled a bit since learning about dark therapy from Dr. Phelps. I keep a pair of blue light–blocking glasses on my desk for demonstration, and remind patients to start wearing them—preventatively—as the days begin to lengthen in late February. As Dr. Phelps describes, the best time to don them depends on the severity of symptoms. For prevention, it’s 1 to 2 hours before bed.