Home » A Review of Medications for PTSD, With a Focus on Topiramate

A Review of Medications for PTSD, With a Focus on Topiramate

Paul Riordan, MD.
From The Carlat Psychiatry Report
Issue Links: Learning Objectives | Editorial Information | PDF of Issue
Paul Riordan, MD. Assistant Consulting Professor of Psychiatry, Duke University. Dr. Riordan has disclosed no relevant financial or other interests in any commercial companies pertaining to this educational activity.
A new patient comes into your office for an assessment. He tells you he cannot keep living this way. He shops at Walmart at 3 am to avoid strangers. He startles easily and suffers from nightmares and flashbacks related to a trauma he experienced in the Army. He’s tried sertraline and venlafaxine for PTSD but did not find them helpful and wants to try something else. You offer a referral for trauma-focused therapy, but he refuses, saying “I don’t want to talk to anyone.”

Are there any other medications that could help? When it comes to PTSD, trauma-focused therapy is first-line. It is backed by solid data with a large effect size, while medications have only mild treatment effects (Lee DJ et al, Depress Anxiety 2016;33(9):792–806). A possible exception to this rule is that patients who choose their preferred treatment do better when they receive their choice—meaning patients who prefer pills do better when they get pills (Mergl R et al, Psychother Psychosom 2011;80(1):39–47).

Which medications work in PTSD?
Sertraline and paroxetine have FDA approval in PTSD, but there is nothing about the pathophysiology of PTSD that points to SSRIs as the cure. In some countries, SSRIs did not gain approval because they mainly worked in civilian trauma and not military trauma, but military trauma is more difficult to treat whether with medications or therapy. A new meta-analysis—the largest to date—compared effect sizes of 26 medications across 58 studies that had a total of nearly 7,000 patients with PTSD (de Moraes Costa G et al, J Psychiatr Res 2020;130:412–420).

What did the study find? Only seven medications—fluoxetine, paroxetine, quetiapine, risperidone, sertraline, topiramate, and venlafaxine—were better than placebo. Missing from this list is prazosin; it no longer passes statistical muster due to a large negative trial of 304 veterans with PTSD (Raskind MA et al, N Engl J Med 2018;378(6):507–517), but there were flaws with that study that lead some to believe prazosin does work in a subset of patients (see TCPR, April 2019). 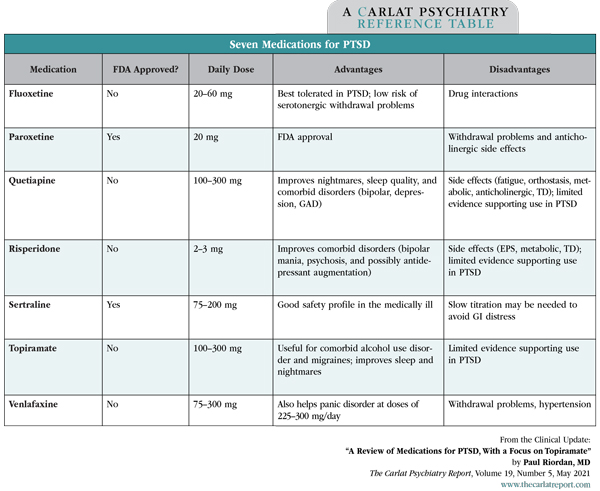 As expected, the SSRIs and SNRIs had small benefits, with effect sizes ranging from 0.2 to 0.35—about the same as the small effect sizes observed for antidepressants in depression (Ormel J et al, Psychol Med 2019;50(2):177–186). Fluoxetine had the best balance of efficacy and acceptability, but that was mainly due to high tolerability, since its benefit was small. Despite the small effect sizes, our confidence in those benefits is high, with each medication having 650–1,400 total participants across their trials.

In contrast, the effect sizes were larger (0.5–0.6) for a few off-label medications: topiramate, risperidone, and quetiapine. However, there were only a few studies backing these medications, with only 70–100 patients each—so while they show promise, it’s not definite since small studies are notorious for inflated effect sizes.

Benefits of topiramate for PTSD
Most surprisingly, topiramate came out on top as having the greatest benefit for PTSD, with a medium effect size (0.57). There is a lot of uncertainty around that figure, as it was based on only two randomized trials involving 73 civilian patients. However, three randomized trials of 137 veterans were excluded because they focused on treatment-resistant PTSD (two studies) or on comorbid alcohol use disorder with PTSD symptoms as a secondary outcome (one study). If these studies are included, the total n becomes 210, with one positive trial, three trials trending toward significance, and one negative trial. The negative trial, which focused on treatment-resistant PTSD in veterans, had a high dropout rate due to side effects (Lindley SE et al, J Clin Psychopharmacol 2007;27(6):677–681). In the other trials, while topiramate caused side effects like dizziness, paresthesias, and memory problems, it did not lead to more dropouts.

What did topiramate help with? Across studies, it appeared most helpful for the “reexperiencing” symptoms—flashbacks, intrusive memories, and nightmares, with less benefit for avoidance and numbing symptoms.

How to use
Slow titration is recommended for topiramate’s FDA-approved indications (migraines and epilepsy), and we have found that strategy helpful in reducing side effects like dizziness and cognitive impairment. For PTSD, start at 25 mg nightly and raise by no more than 25 mg/week toward a target dose of 100–300 mg daily. With a 21-hour half-life, nightly dosing is acceptable, but opt for divided dosing if the patient experiences side effects as the level peaks.

The most common side effects to watch for are dizziness, paresthesias, somnolence, and cognitive impairment. For cognition, topiramate typically affects word finding and verbal fluency—tested by listing as many animals as possible in 60 seconds (Thompson PJ et al, J Neurol Neurosurg Psychiatry 2000;69(5):636–641). Rare side effects to watch for include kidney stones, glaucoma, increased body temperature, and metabolic acidosis.

TCPR Verdict: Topiramate has potential as second- or third-line pharmacology for PTSD after a trial of SSRIs/SNRIs, and it may be closer to first-line for patients with comorbid alcohol use disorder.

Related Podcast Episode:
13 Ways to Use Topiramate
We ask the big questions: Is topiramate a drug or a sugar? Do you need to use the FDA-approved combo pill for weight loss? And which of its 13 off-label psychiatric uses are ready for clinical practice?