Katherine Eban Katherine Eban is an investigative journalist whose 2019 book Bottle of Lies: The Inside Story of the Generic Drug Boom uncovered problems in generic drug manufacturing. Ms. Eban has disclosed no relevant financial or other interests in any commercial companies pertaining to this educational activity.

TCPR: What’s wrong with generic drugs?
Ms. Eban: That’s the question that got me started. In 2008, I got a phone call from Joe Graedon, the pharmacologist who hosts the NPR program The People’s Pharmacy. He was getting complaints from listeners who were saying that their generic drugs were either causing troubling side effects or weren’t effective anymore. So I started investigating, and it led me on a decade-long inquiry, ending up in India and China where the majority of our low-cost drugs are made.

TCPR: What did you find?
Ms. Eban: I began looking into the conditions in those manufacturing plants, and it’s really like something out of Upton Sinclair’s The Jungle: just a very troubling web of fraudulent data, substandard conditions, and manufacturing plants with snakes and monkeys and bird droppings. In one case a company was steaming fabricated documents overnight in a sauna-like room to make them look old.

TCPR: How does this kind of thing get past inspectors?
Ms. Eban: At US plants, the FDA conducts surprise inspections, but with overseas plants they announce their inspections in advance, so these plants have months to launder their true conditions. Essentially, they create a stage set of compliance that does not reflect what is actually going on in the plants. That is what I was able to uncover by obtaining documents, speaking with investigators, and talking to whistleblowers.

TCPR: Your book talks about antibiotics that don’t reach therapeutic levels, dangerous contaminants, and—closer to home for psychiatry—extended-release (ER) mechanisms that break down, like generic Wellbutrin XL. What happened there?
Ms. Eban: That was one of the medications that Joe Graedon was hearing a lot of complaints about from his listeners. First he wrote the FDA about it but they took no action. Then he got ConsumerLab to test Teva’s generic Wellbutrin XL, and lo and behold, the generic dumped the active ingredient into the bloodstream much faster than the brand. It was like guzzling three glasses of wine as opposed to drinking them over the course of a day. The patients were complaining of dizziness, suicidal thoughts, and nausea. That discovery shamed the FDA into conducting their own study, and that generic was forced from the market. Then one of the FDA officials who had spent years telling Joe Graedon “everything was fine” ended up going to work at Teva, which was essentially the company the official had been protecting for years.

TCPR: Why do we see more problems with ER medications? Can’t a company just make an identical ER mechanism after the patent runs out?
Ms. Eban: The mechanisms may be in the public domain, but the manufacturing techniques are not. The brand-name companies don’t turn over their recipes, so everything has to be reverse-engineered.

TCPR: When did generic manufacturing start to move overseas?
Ms. Eban: It started slowly in the 1980s and quickened with the launch of the new century. By 2004 the FDA had more overseas plants to inspect than it did within the US.

TCPR: Have the brand-name manufacturers also shifted overseas, or is this just affecting generics?
Ms. Eban: Western brand-name companies have bought up a number of manufacturing plants overseas, so this is not a problem that is exclusive to generics. In the book, I do feature a number of brand-name companies who are essentially getting duped within their own plants by supervisors who are faking data. But the bigger problem is driven by the financial model of the generic drug industry. Profit margins are slim, because generic competition causes the prices to plunge. That leaves little incentive for quality.

TCPR: How widespread is this problem?
Ms. Eban: There aren’t a lot of data on this, but here’s a metric. The book features a young FDA investigator named Peter Baker. He inspected 86 plants in India and China over four years, from 2012 to 2016, and found evidence of fraud in four-fifths of those plants. So it’s fairly widespread.

TCPR: How did he uncover the fraud?
Ms. Eban: Instead of relying on data printouts, Baker looked into the plants’ computer systems, and there he found metadata evidence of test manipulation. Some plants were secretly pretesting their drugs to see if they would pass, and if they wouldn’t then they’d manipulate the testing parameters. They’d delete those pretests, which they were supposed to share with the FDA.

TCPR: Your book focuses on India and China. Have you seen this problem in other countries?
Ms. Eban: I don’t think it’s unique to those countries, but regulatory break-downs have made it more common there. The plants in India and China are not being scrutinized by their own regulators, so the scrutiny is left up to the FDA, and thus it’s become a game of how to trick the FDA inspectors.

TCPR: Did your investigations uncover any hope?
Ms. Eban: The book tells the story of a heroic whistleblower who exposed incredible wrongdoing in India’s largest drug company, and he did so at incredible risk to himself and his family. That’s basic hope in humanity.

TCPR: What happened to the drug company he exposed?
Ms. Eban: That company was Ranbaxy. They no longer exist, but before 2014 they manufactured several dozen generics, including gabapentin, nefazodone, atorvastatin, and pantoprazole. Although the company was eventually brought down by the investigations, the conditions that gave rise to the fraud inside Ranbaxy have not necessarily changed. There are more Ranbaxys. I think we need to realize that we can’t really separate the issue of cost from quality. We need to build a system that incentivizes quality in generics, and I see some evidence of that happening.

TCPR: Seems like a simple change would be for the FDA to conduct surprise visits overseas.
Ms. Eban: The FDA had been relying on overseas companies to organize their travel. After the book came out, there were some congressional hearings where the FDA announced that they would stop that practice, but this is not a wholesale change in how they operate—their visits are still announced. COVID-19 has further derailed attempts at improvement because the FDA has put overseas inspections on hold during the pandemic. On the other hand, COVID-19 has accelerated our understanding of the grave risks of being dependent on foreign countries for lifesaving supplies. There is a movement in the US to reshore our pharmaceutical supply chain.

TCPR: We’ve seen a lot of drug recalls lately, like metformin ER. Are these just honest mistakes, or are they indicative of the larger problem?
Ms. Eban: These recalls are part of the problem. There is basically a worldwide scandal in which a carcinogen called NDMA was found in metformin ER, ranitidine, and several of the “-sartan” angiotensin II receptor blockers. An FDA inspector had actually identified problems in a plant in China where they were not investigating impurity spikes in their own drugs. He flagged that, but his supervisors at the FDA ignored the finding. The FDA has become increasingly industry-friendly and often downgrades the findings of its own inspectors.

TCPR: You’ve uncovered clear problems. Are doctors seeing the results?
Ms. Eban: It’s hard to connect the dots. How do you know if a bad outcome is due to a bad drug? Doctors who prescribe drugs with a narrow therapeutic index are more likely to make the connection. At the Cleveland Clinic, the transplant team figured out that their patients were suffering organ rejection after being switched to a certain Indian-manufactured ­immunosuppressant.

TCPR: What can clinicians do about this?
Ms. Eban: Clinicians usually don’t know which generic their patient is taking. But if they have a patient who’s suddenly become unstable, it might be worth finding out if the pharmacy dispensed drugs from a different manufacturer.

TCPR: Do any medications or manufacturers stand out?
Ms. Eban: I don’t want to be in a position of calling winners and losers. But I get a lot of queries about that, so I’ve created a five-step guide at www.katherineeban.com/guide. Patients can start by finding out who manufactured their medicine. They can check if that manufacturer has run afoul of the FDA—namely, if there have been problems with sterility (ie, contamination) or data integrity (ie, fraud). If there are problems, patients can find another manufacturer from the FDA’s Orange Book and request a change.

TCPR: What’s next for you?
Ms. Eban: I have been investigating the Trump administration’s response to COVID-19 for Vanity Fair magazine. Unfortunately, I’m going to be doing a lot more of that.

TCPR: Thank you for your time, Ms. Eban.

Table: Generic Stumbles From The Past 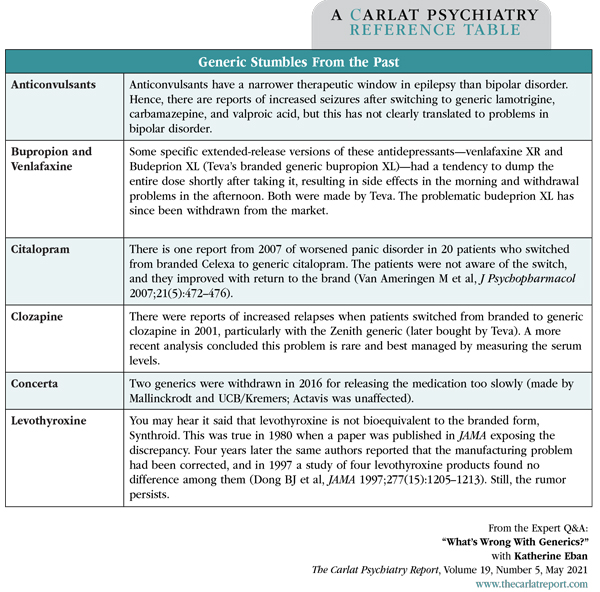 To learn more, listen to our 5/10/21 podcast, “What’s Wrong With Generics? An Interview With Katherine Eban.” Search for “Carlat” on your podcast store.