Jason Mallo, DO
From The Carlat Psychiatry Report
Issue Links: Learning Objectives | Editorial Information | PDF of Issue
Jason Mallo, DO. Attending psychiatrist, Maine Medical Center, Portland, ME. Dr. Mallo has disclosed no relevant financial or other interests in any commercial companies pertaining to this educational activity.
Atomoxetine (Strattera) is approved for ADHD in children and adults but has also been explored in many other disorders. That has led to some myths and truths that we’ll explore here.

Myth: Atomoxetine is useful for depression
Atomoxetine was originally developed as an antidepressant, but although open-label trials were promising, that promise fell flat in more rigorous trials (Corp SA et al, J Clin Psychiatry 2014;75(9):1010–1018; Weintraub D et al, Neurology 2010;75(5):448–455). To target ADHD and depression, you’re better off prescribing an antidepressant with benefits in ADHD, such as bupropion or ­desipramine.

Truth: Atomoxetine is useful for ADHD
Atomoxetine was released in 2002 as the first nonstimulant for ADHD and became generic in 2017. Multiple controlled studies support its use. With its NNT* of 5–7, it appears just as effective as other nonstimulants, including viloxazine, the latest antidepressant-like medication repurposed for ADHD (Nasser A et al, Int J Clin Pract 2021;75(8):e14330). Atomoxetine has not been compared directly with nonstimulants, but stimulants (NNT = 2–4) have been found more effective than atomoxetine in head-to-head trials. Still, atomoxetine has some advantages. For instance, it can be given once daily and has sustained benefit throughout the day, without rebound effects. Because it’s unscheduled, you can prescribe refills. Plus, in our experience, some patients respond preferentially to atomoxetine. A disadvantage is that while symptoms can improve within a couple of weeks on atomoxetine, full benefit can take up to 10 weeks to manifest.

*NNT is the number of patients needed to treat to achieve a meaningful response beyond the placebo effect. Lower numbers are better.

Myth: Atomoxetine is better tolerated than stimulants
There’s a myth that atomoxetine, like stimulants, increases energy. However, comparison trials show atomoxetine is more associated with somnolence, while stimulants are more associated with insomnia. Atomoxetine causes fatigue at a rate of one in 20 patients, and that fatigue can be intense. In post-marketing surveillance reports to the FDA, atomoxetine ranked second among 30 medications with antidepressant structures for causing fatigue that was severe enough to prompt a report to the FDA.

Both atomoxetine and stimulants increase heart rate and blood pressure, and the FDA recommends that you periodically check these vital signs. Atomoxetine is contraindicated in poorly controlled cardiovascular disease. It may prolong the QTc, but there are few reports of this, and ordering a baseline ECG is not necessary.

Truth: Atomoxetine has other risks
Other disorders that warrant caution with atomoxetine include glaucoma, tics, seizures, and hepatic disease. Like antidepressants, atomoxetine has a warning about suicidal ideation in children and adolescents. This risk has shown up in case reports but has not been common enough to reach statistical significance in controlled trials (Bangs ME et al, J Child Adolesc Psychopharmacol 2014;24(8):426–434). Its safety in pregnancy and lactation is unknown.

Myth: Atomoxetine is a good choice to augment stimulants
The safety of this combination is not fully established, though some reports support it. To avoid cardiovascular events, supplementing stimulants with alpha-agonists may be a better option. The alpha-agonist guanfacine has controlled trial evidence to augment stimulants, and although guanfacine’s effects were meager, they at least reached statistical significance and reduced some stimulant side effects like insomnia and hypertension (McCracken JT et al, J Am Acad Child Adolesc Psychiatry 2016;55(8):657–666).

Truth: Drug interactions matter with atomoxetine
Atomoxetine is metabolized through a single hepatic pathway—CYP2D6. That means it can reach high levels if this pathway is blocked by strong 2D6 inhibitors like fluoxetine, paroxetine, duloxetine, high-dose sertraline (≥ 150 mg/day), or bupropion. Levels can also surge in patients who are poor metabolizers at 2D6, with peak levels fivefold higher in this population, and poor metabolizers are twice as likely to stop the drug due to side effects. If your patient is taking a strong 2D6 inhibitor or is a known poor metabolizer at 2D6, start with the lowest possible dose, raise it half as fast, and aim for a target dose that’s 50%–75% less than usual. As to whether you should run a genetic test before starting atomoxetine, the FDA has left the choice up to clinicians. They recommend lower doses for known 2D6 poor metabolizers, but they don’t recommend routinely testing this enzyme.

Myth: Atomoxetine is safe in bipolar disorder
The noradrenergic antidepressants generally have the highest risk of inducing mania, particularly venlafaxine and the tricyclics (Melhuish Beaupre LM et al, J Clin Psychopharmacol 2020;40(2):180–185). Atomoxetine’s risk in this regard is unknown, but its noradrenergic mechanism makes it suspect, and there are case reports of mania and psychosis on it (Reed VA et al, CNS Drugs 2016;30(7):603–628). If mania and psychosis are a concern, stick with the alpha-agonists guanfacine and clonidine, which have small studies supporting their safety and possible benefits in bipolar disorder and schizophrenia (Kontaxakis V et al, Acta Psychiatr Scand 1989;79(1):108–110; Arnsten AFT and Jin LE, Yale J Biol Med 2012;85(1):45–58).

Table: How to Use Atomoxetine for Adults 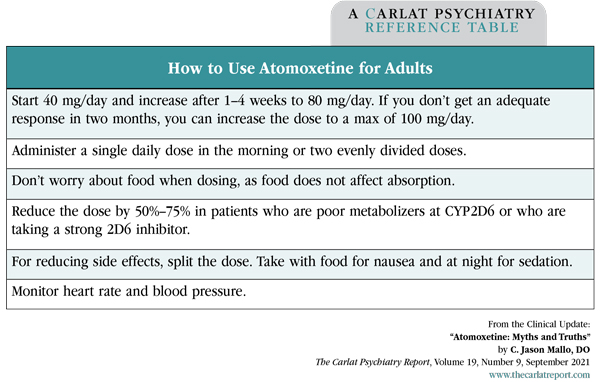 Truth: Atomoxetine may have other uses
For ADHD and anxiety, atomoxetine may have a role. In a 14-week randomized controlled trial of 442 adults with ADHD and social anxiety disorder, atomoxetine outperformed placebo on markers of ADHD (p < 0.001) and social anxiety (p < 0.001). However, the results may have been influenced by the interaction of each condition on the other, and the industry-sponsored study has not been independently validated (Adler LA et al, Depress Anxiety 2009;26(3):212–221).

TCPR Verdict: Atomoxetine’s career may be marked by unfulfilled hopes, but it still has a role. Consider it for ADHD when first-line options are ineffective, a controlled substance is undesirable, or the patient has comorbid social anxiety or binge eating disorder.
General Psychiatry
KEYWORDS adhd atomoxetine stimulant stimulants
Jason Mallo, DO

Hypothyroidism and Depression: Just How Related Are They?