Daniel Carlat, MD
From The Carlat Psychiatry Report
Issue Links: Editorial Information | PDF of Issue
Daniel Carlat, MD Dr. Carlat has disclosed that he has no significant relationships with or financial interests in any commercial companies pertaining to this educational activity.
Generic Watch
Very quietly, under our very noses, most of the newer antidepressants have gone generic, the latest being Celexa (citalopram). Before more details, here is a little generics review for those of you who have not been keeping up with this ferociously litigious area of psychopharmacology.

The Hatch-Waxman Act of 1984 was vital for generics because it allowed them to bypass the lengthy and expensive clinical trial process. Rather than testing their generics on patients, companies were only required to prove "bioequivalence" of their product to the real thing--that is, identical chemical structure and comparable absorption--in order to begin marketing it after the 17-year patent ran out. Sounds pretty cut and dried--so why have there been so many suits? Because the act stipulated that if the brand-name companies wanted a 30- month extension of market exclusivity (and who wouldn't?) all they had to do was to file a legal challenge to the generic. Once approved, the generic companies get their own 6 months of exclusivity, which is why it takes so long for generic prices to dip significantly below brand name.

See the chart below which lists the available generic antidepressant (as of January 2005), along with their prices in comparison to their brand-name equivalents. Zoloft will go generic in June 2006. Lexapro's patent runs to 2009, but a generic company, Ivax, will be challenging its patent in court around May of 2005. Effexor's patent is protected until June of 2008. TCR will keep you posted. 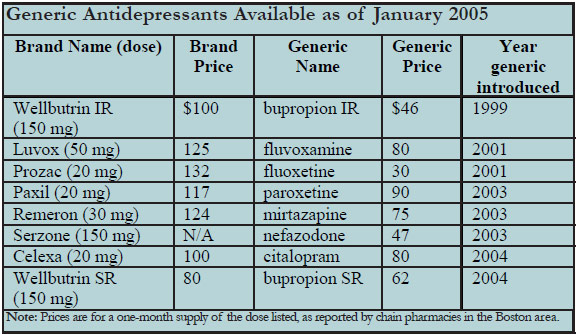 Vagal Nerve Stimulation
The FDA giveth, and the FDA taketh away.

In June of this year, the FDA's advisory committee on neurological devices recommended, by a 5-2 vote, limited approval for vagus nerve stimulation (VNS) to treat treatment-resistant depression (TRD). Two months later, the full FDA approval committee rejected that recommendation, and it was back to the drawing board for Cyberonics, makers of the device.

What happened? Originally, Cyberonics had hoped to get approval the old-fashioned way, via a placebocontrolled double-blind trial. However, that three-month study, involving 235 patients randomly assigned to either VNS or placebo (in this case, implanting the device but leaving it off) showed no statistical difference in response rates (VNS RR was 15%, placebo RR was 10%).

The company then attempted to salvage that study by extending it by 12 months. In this extension, all patients were offered active VNS treatment. A total of 205 accepted, 180 of whom completed the study. As a control group of sorts, they enrolled 124 patients with TRD in a "treatment-asusual" arm, in which doctors could use whatever medications they chose. Note the glaring deficiencies in study design. Patients were not randomly assigned to the two groups, increasing the chance of clinically significant pre-treatment differences. Neither patients nor investigators were blinded to the treatment, leading to potential measurement bias in favor of the new, exciting treatment (i.e., VNS). The results? VNS barely eked by, with a response rate of 22% vs. 12% for the treatment as usual group. To read the study results for yourself, check out the FDA website at: http://www.fda.gov/ohrms/dockets/a c/04/briefing/4047b1_01_Clinical%20 Executive%20Summary-FINAL.doc.

After a cold, sober look at the numbers, the mystery is not that the FDA overturned a panel's recommendations (a pretty unusual event), but rather that VNS was able to win itself a hearing at all.

Serzone Update
Despite a plethora of worried phone calls from your patients, nefazodone is still available, but Serzone is not. As of June 14 of 2004, Bristol-Myers Squibb halted the distribution of Serzone. Some claim that BMS got nervous about reports of liver toxicity, including 55 reports to the FDA of liver failure, 20 of them resulting in death. BMS denies that safety concerns led to the action, and say instead that they were responding to declining sales due to generic competition. While post-marketing case reports of liver failure cannot establish a causeeffect relationship, most experts agree that there is something about nefazodone that the liver particularly dislikes (Int Clin Psychopharmacol 2003; 18:157-61.), and that liver toxicity, if it is going to occur, generally shows up within four months (CMAJ, 2003; 169:1187). Since most of us have a few patients in our practices who swear by nefazodone, it is nice that the U.S. is one of the few countries where it is still available. TCR suggests that in prescribing it, disclose the risk, order baseline LFTs and repeat monthly over the first six months, then gradually less frequently after that.
General Psychiatry
Daniel Carlat, MD