Steve Balt, MD and Daniel Carlat, MD
From The Carlat Psychiatry Report
Issue Links: Learning Objectives | Editorial Information | PDF of Issue
Steve Balt, MD Research fellow, Addiction Pharmacology Research Laboratory, California Pacific Medical Center Dr. Balt discloses that his spouse is employed as a sales representative for Bristol Myers Squibb. Daniel Carlat, MD
Editor-in-Chief, Publisher, The Carlat Report.
Dr. Carlat has disclosed that he has no relevant relationships or financial interests in any commercial company pertaining to this educational activity.
Pseudobulbar affect (PBA), also known as pseudobulbar palsy, is a neurological condition in which patients have sudden outbursts of crying or laughing. While the episodes can be triggered by events that would ordinarily elicit genuine sadness or amusement, patients with PBA react with intense displays of emotion that they cannot control. The frequency of these episodes ranges from weekly to several times a day, and they can seriously impair social functioning.

By definition, PBA is a neurologic disease, occurring most often in ALS (amyotrophic lateral sclerosis), in which the prevalence of PBA is about 50%. PBA occurs less commonly in strokes, multiple sclerosis, Parkinson’s disease, and brain injuries from tumors, strokes, or head trauma. Because so many different brain lesions can cause PBA, the actual pathophysiology is unclear, but a popular theory is that it is caused by a loss of voluntary motor control of the facial musculature.

Until now, the most established treatments for PBA were antidepressants—namely, tricyclics and SSRIs. Both have been shown to ease PBA symptoms in placebo-controlled trials. Among SSRIs, fluoxetine (Prozac) 20 mg/day, citalopram (Celexa) 10 mg/day to 30 mg/day, and sertraline (Zoloft) 50 mg/day have been shown to be effective—but they are not FDA approved.

Nuedexta is a combination of dextromethorphan (DM) and quinidine sulfate (Piore EP, Drugs 2011;71(9):1193–1207). You might reasonably ask why these two agents would have ever been considered as a treatment for PBA. DM is widely known as a cough suppressant. When taken at very high doses, it can cause hallucinations, a feeling of dissociation, and euphoria, which is why pharmacies now tightly limit its sale. DM causes these effects because it affects various neurotransmitters. It has SSRI properties, it is an NMDA receptor antagonist (glutamate stimulates this receptor), and a sigma 1 agonist (don’t ask us about sigma 1—we don’t know what it does and nobody else knows much about it either). 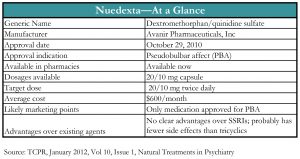 It was DM’s NMDA antagonist properties that originally caught the attention of researchers interested in slowing the progression of ALS, which is thought to be caused in part by toxic effects of glutamate. While DM failed ALS trials, patients taking it told researchers that it seemed to diminish their PBA symptoms. So Avanir Pharmaceuticals conducted trials specifically targeting DM for PBA. Why did they combine it with quinidine? Because DM is very rapidly metabolized by 2D6, and quinidine is a potent inhibitor of 2D6. Delivering them together keeps DM levels high for long enough to have a therapeutic effect (Rosen H, Drugs Today 2008, 44(9):661).
The FDA approved Nuedexta based on data from a clinical trial of 326 patients with ALS and multiple sclerosis with clinically significant PBA (Pioro EP et al, Ann Neurol 2010;68(5):693–702). Nuedexta was more effective than placebo, both in terms of decreasing the number of emotional episodes, and on a numerical scale of PBA called the Center for Neurologic Studies–Lability Scale. Nuedexta comes in one dosage form: 20 mg of DM combined with 10 mg of quinidine (termed 20/10), and is given twice a day.

So why are you reading about a neurology drug in a psychiatry newsletter? Here’s where it gets interesting. Even though PBA is formally “owned” by neurologists, psychiatrists often end up treating it. After all, many patients with neurologic diseases have comorbid depression or bipolar disorder, and differentiating between PBA and a psychiatric syndrome is not always clear-cut. To muddy the turf boundaries even more, some authors (including some affiliated with Avanir) recently proposed a new diagnostic classification, “Involuntary Emotional Expression Disorder” (IEED), which would incorporate PBA and other types of uncontrollable emotion (Cummings JL et al, CNS Spectr 2006,11(6):1–7). While the authors were careful to distinguish IEED from mania or depression, clinicians in everyday practice may have a harder time doing so. It’s likely that some prescribers may resort to Nuedexta as an off-label alternative for their patients with mood disorders, even though there’s no evidence to support this. Nevertheless, one author (a scientific advisor to Avanir) has published his thoughts on why Nuedexta could be effective for depression (Lauterbach EC, Med Hypotheses 2011,76(5):717–719), and clinical trials are under way for the treatment of neuropathic pain. We’re eager to see the results.

So what about the cost? Well, as with many new drugs, one big problem with Nuedexta is sticker shock—it costs around $600/month, or $7,000 per year. In the absence of any head to head studies showing that Nuedexta works better than antidepressants for PBA, we recommend a trial of SSRIs or TCAs before jumping to Nuedexta. Of note, Nuedexta causes a small but significant increase in the QTc interval on EKG.

We would love to suggest you create your own version of this medication by prescribing generic DM and generic quinidine, but quinidine’s lowest available dose is 10 times the dose you’d need, so that method wouldn’t work. Plus, Avanir is vigorously defending its patent on their proprietary two-drug combination.

Perhaps an even better alternative would be to combine DM with an SSRI like fluoxetine, which is effective for PBA as monotherapy as well as being a potent 2D6 inhibitor itself. But be aware that combining DM with an SSRI could theoretically cause serotonin syndrome, since DM has some serotonin reuptake antagonist properties.
TCPR Verdict:
For PBA, save Nuedexta for third line use, after SSRIs and tricyclics.
General Psychiatry
KEYWORDS mood_stabilizers natural_medications neuroscience_in_psychiatry
Steve Balt, MD

Four Newer Antidepressants: Should You Use Them?