Home » A Primer on Drug Screening

A Primer on Drug Screening

From The Carlat Addiction Treatment Report
Issue Links: Learning Objectives | Editorial Information
Talia Puzantian, PharmD, BCPP
The technology of drug testing has progressed significantly over the years. This is both good and bad for doctors. There are more options, but perhaps too many. There are many types of tests and they vary in terms of the drug detection time frames.

Most labs do the initial screen with immunoassays, which involve antibodies to detect specific drugs, and which can be automated and done rapidly. A positive result is considered only presumptive until a second, more accurate, sensitive and reliable test is done for confirmation, usually gas chromatography-mass spectrometry or high-performance liquid chromatography.

If you order a standard urine drug screen, most labs will automatically test for the following: amphetamines, cannabinoids, cocaine, opioids, some benzodiazepines, alcohol and phencyclidine (PCP). You generally will have to specifically ask for others, such as barbiturates, methadone, LSD, psilocybin, and MDMA. Recently developed designer drugs, synthetic THC-like chemicals in herbal incense (Eg, K2, Spice Gold, Kush) and synthetic stimulants (bath salts) are a bigger challenge because there’s often no standard to test against and they’re often so potent that a small “effective” dose is nearly impossible to pick up in a lab sample.

Which type of specimen should you order?

Specimens of urine, blood, hair, saliva, sweat and even nails can be used to do lab drug testing and some are more specific, sensitive and accurate than others.

Urine. Urine drug testing is the most common type ordered because it’s a noninvasive way to collect a sample, it’s available in large volume, and it generally has high concentrations of drugs and metabolites which allows for longer detection than in blood, for example. Many factors can affect how soon and for how long a drug can be detected, but you can make reasonable predictions. It takes about two to three hours for most drugs (only 30 minutes for alcohol) to be concentrated in urine so testing too soon after use in a non-chronic user of a drug may give you a negative result. Most drugs will be detected in urine for about a day or two after use, some longer. Reference the charts below for further information. 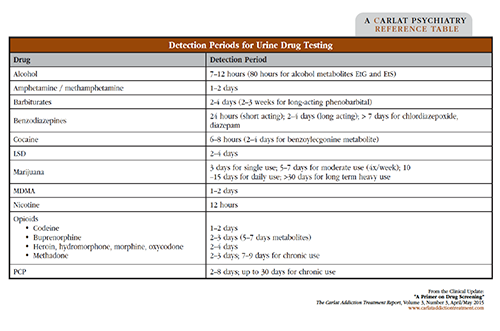 
Initial urine screening can yield false positives. The most common are poppy seeds appearing as opioids, ibuprofen appearing as marijuana, and Vicks Vapor Inhaler falsely signaling “crank.” However, this is rarely a problem because confirmatory tests are quite specific and will eliminate most false positives before you even see them.

False negative urine screens are more problematic and are usually due to efforts to game the system. There are myriad urine test cheating techniques, and new ones appear regularly. Here are a few of the more common:


There are a number of ways to check the integrity of urine samples (by checking the pH, or the creatinine for dilution, or by detecting adulterants). Studies have suggested that the Intect 7 test strips (from Branan Medical Corp, Irvine, CA: http://bit.ly/1bTpaKt) are the most sensitive (Moeller KE et al, Mayo Clin Proc 2008; 83(1):66–76). A test strip is dipped in the urine sample and then compared to a color chart after one minute; it’s simple enough to use in your office setting.

Blood. Blood sampling is an accurate way of determining how much of a drug is in a patient’s system at that moment in time, but its detection window is only 6–12 hours—so it’s hard to use for random screens unless you can draw the sample in your office.

Hair. Hair analysis gives you a much wider detection window (up to 90 days) and is an easy and non-invasive collection method. But it’s not going to be helpful in telling you about your patient’s current substance use (it doesn’t detect use within the previous 7–10 days) and it can’t be used to detect alcohol. Other limitations of hair testing include difficulty in detecting low-level (single time) use and inaccuracies depending on your patient’s hair color (some drugs have enhanced binding to melanin in dark hair). While it’s hard to adulterate a hair sample, if a patient simply shaves his or her head, this method is not going to be useful.

Saliva. A quick swab of the inner cheek provides an easy collection for saliva which can be used to detect traces of drugs and alcohol. Saliva has an advantage over urine in that it’s harder to adulterate or substitute.

Sweat. A skin patch that looks like a large adhesive bandage can be worn by patients for up to 7–14 days to measure drugs in their sweat. This has become a popular way for parole programs to monitor drug use. It’s non-invasive, easily administered and hard to adulterate (unless the patient removes the patch). This method is limited by availability of testing facilities and it is possible that variability in how much people sweat would affect the results.

Breath. This is the most common way to find out how much alcohol is in someone’s system. Your patient blows into the device and you get a number for the Blood Alcohol Concentration (BAC). It’s only useful for alcohol and has a short window for detection so it’s not going to be too useful for most clinical settings.

Dr. Carlat’s Verdict: Urine drug screens should be an important and routine part of your clinical work with patients. Find a lab to work with and set up a system to collect samples in your office or to send patients to the lab for sample collection.
Addiction Treatment
KEYWORDS diagnostic_testing laboratory_testing_in_psychiatry practice_tools_and_tips