Daniel Carlat, MD
From The Carlat Psychiatry Report
Issue Links: Learning Objectives | Editorial Information | PDF of Issue
Daniel Carlat, MD Publisher The Carlat Psychiatry Report Dr. Carlat has disclosed that he has no relevant financial or other interests in any commercial companies pertaining to this educational activity.
Given how many essentially equivalent medications we have to choose from, how great would it be to have a test that tells us which drug to prescribe for which patient? Everybody wants personalized medicine, and in some other specialties, such as oncology, this is becoming a standard part of treatment. In this article, we’ll review some of the basics of pharmacogenetic testing and examine in more detail the commercial genetic tests that are currently available.

The theoretical basis for pharmacogenetic testing
Genes are composed of specific sequences of nucleotide base pairs, and those base pairs form an alphabet that instructs our body to create amino acids, which are put together in various ways to create proteins. Many of these proteins are enzymes, which are defined as molecules that facilitate chemical reactions.

Of most relevance to pharmacogenetic testing in psychiatry, there is a specific group of enzymes called the cytochrome P450 enzymes (or CYP450), which are found in the liver and help our bodies metabolize drugs. They accomplish this by chemically transforming the drugs to make them more water-soluble. The more water-soluble a drug becomes, the more likely it is to dissolve in urine, and thence get cleared from the body.

The genes that encode CYP450 enzymes are called pharmacokinetic genes, and they vary among individuals. Some of these gene variants create versions of the enzymes that are inactive or much less active than normal, while other variants increase activity. This interindividual variability is termed polymorphism, from the Greek “poly” (many) and “morph” (form). Another term for a genetic variant is an allele, which refers to the particular form of a gene on one of two paired chromosomes. Based on the CYP450 polymorphisms, individuals are categorized in different ways with respect to specific enzymes:


There are a number of CYP450 enzymes—for example, 1A2, 2D6, 2C19, and 3A4. One can be a poor metabolizer at one enzyme, but an extensive metabolizer at another.

In addition to pharmacokinetic genes, lab tests can also detect variations in “pharmacodynamic” genes that create proteins relevant to how drugs act on neurons in the brain. These include genes encoding for serotonin receptor and transporter proteins. Unfortunately, studies have not been able to consistently correlate variants in these genes with clinical response (see this month’s Q&A for details). Nonetheless, this hasn’t prevented companies from selling kits to test these genes, claiming that the results can tell patients which drugs are likely to be more or less effective.

Is metabolizer status clinically relevant?
It’s clear that metabolizer status can affect blood levels of medications, as one would predict. Most of the studies demonstrating this have been completed with healthy volunteers taking a single dose of a drug. That’s very different from the typical psychiatric patient, who takes more than a single dose and is often taking more than one medication at a time. So most studies are suggestive, but not necessarily applicable to our patients.

There are several studies in real-world psychiatric settings that imply a person’s metabolizer status does in fact affect both response to medications and side effects. They are mainly retrospective studies, meaning that researchers identify a group of patients, find their metabolizer status, and see whether there’s any correlation between genotype and response or side effects. Some of these studies have shown such correlations. For example, in one study of hospitalized patients, those who were poor metabolizers for 2D6 were over three times more likely to have required a switch of antidepressants than extensive metabolizers (Journal of Clinical Psychopharmacology 2005;25:188–191).

These suggestive studies led many clinicians to become interested in the potential utility of pharmacogenetic testing. The only way to assess this utility is to randomize patients to a group in which their treatment is guided by such testing vs a group in which it is not. If genetic testing is useful, we should be able to see a measurable advantage in the guided group. We’ll review these studies next.

Prospective clinical trials of genetic testing
The last time TCPR looked at pharmacogenetic testing (in our May 2015 issue), we focused specifically on studies done by Assurex, the company that markets the Genesight test. We concluded that the data didn’t meet reasonable standards of clinical evidence. Since then, studies have been published regarding two other genetic testing packages.

These proprietary commercial tests are different from simply ordering P450 testing through a laboratory. The companies assemble multiple genetic tests into a multi-gene panel. For example, Assurex’s Genesight test analyzes six CYP450 genes and two serotonin genes (https://genesight.com/patients/medications-and-genes-tested/). Genomind’s Genecept test analyzes the same six CYP450 genes, but includes more pharmacodynamic genes—12 in all (see https://genomind.com/genes-analyzed/). CNSDose, a newer test out of Australia from a company called Baycrest Biotech, focuses exclusively on pharmacokinetic genes, including several that are not in Genesight’s or Genecept’s portfolio. There are many other commercial tests available—a recent review counted 22 (Bousman CA and Hopwood M, Lancet Psychiatry 2016;3(6):585–590)—but only the three included in this article have published data on the tests’ clinical utility.

In January 2017, the Journal of Clinical Psychiatry published a systematic review of the literature on pharmacogenetic testing in patients with major depressive disorder (Rosenblat JD et al, J Clin Psych 2017, published electronically 1/3/17). The authors started by reviewing the same three Genesight trials we had reviewed in 2015, and like us, they were not impressed. They found that the non-randomized open-label studies had too many methodology problems to be convincing, and that the double-blind study failed in its quest to demonstrate a benefit of Genesight testing.

Rosenblat et al reviewed two more recent studies: one of the Genecept test (marketed by Genomind) and one of CNSDose. The test of Genecept was a 3-month naturalistic study in which 685 patients with depression or anxiety were enrolled. Everybody received the Genecept assay, and 77% of patients improved after 3 months (39% responded, 38% had remission). The numbers sound impressive at first blush, but unfortunately the study was open-label, without blinding and with no comparison group. As the authors point out, without a control group, we have no idea whether patients’ improvement had anything to do with receiving the Genecept test. On a side note, Genomind’s website provides a textbook case of marketing spin. In describing its uncontrolled study, Genomind states that “These data demonstrate that the incorporation of pharmacogenetic information into the treatment of patients with mood and anxiety disorders produces benefits in depression and anxiety symptoms, side effects, and overall functioning” (emphasis added). Caveat emptor.

Finally, the authors reviewed the CNSDose test. Unlike Genesight or Genecept, CNSDose does not suggest specific drugs, but rather gives suggestions for how to dose medications that you may have already chosen. In a 12-week double-blind trial, patients with major depression were randomly assigned to either a genetically guided group (n = 74) or an unguided group (n = 74). The guided group had a remission rate of 72% vs. only 28% in the unguided group, a difference that was statistically significant. The results are pretty spectacular—perhaps too spectacular to be believed. As the J Clin Psych reviewers pointed out, the paper didn’t specify exactly how the reports were used to guide prescribing, nor was it clear how the study achieved a remission rate higher than any other remission rate reported in clinical trials. Given that this was the first study ever published on the CNSDose test, and given how anomalous the remission rates were, we’d need a replication done with a different sample, and preferably one not conducted by the apparent owner of the company.

To sum up, at this point none of these tests inspire confidence, either because of poor methodology (Genesight, Genecept) or results that are so anomalous that they require replication (CNSDose). If you were to use them, any positive effect would likely be due more to the placebo-engendering effect of your enthusiasm than to any true scientific utility. Both the Genesight and Genecept tests are covered by Medicare and some private insurance companies; the criterion is a diagnosis of refractory major depression with at least one prior medication failure (for coverage details, see http://tinyurl.com/zfyh3t4).

Using FDA dosing recommendations as a guide
Pharmacogenetic tests do not require FDA approval, which might explain why so many are being marketed with limited evidence. Nonetheless, the FDA does require some pharmacogenetic information on some drug labels, and it publishes a handy table to allow you to look up which drugs have pharmacogenetic recommendations (see http://www.fda.gov/Drugs/ScienceResearch/ResearchAreas/Pharmacogenetics/ucm083378.htm). You can sort this table by therapeutic area to focus on psychiatric drugs, of which there are 27 listed. 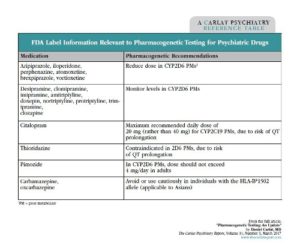 Many of the recommendations are to lower starting doses in patients who are poor metabolizers. For example, in aripiprazole’s label, you’ll read: “Dosing recommendation in patients who are classified as CYP450 2D6 poor metabolizers (PM): The aripiprazole dose in PM patients should initially be reduced to one-half (50%) of the usual dose and then adjusted to achieve a favorable clinical response.”

While the FDA does not specifically ask you to order genetic testing, you will not know whether your patient is a poor metabolizer unless someone has ordered it. Therefore, a case could be made for selectively ordering CYP450 testing to ensure you dose drugs in accordance with FDA labeling. Whether you do this is a judgment call; most of us are content to skip the genetic testing, and instead choose to start most medications at a low dose and titrate up gradually in order to prevent side effects.

Can genetic testing do more harm than good?
Genetic testing may be theoretically helpful in some cases, such as in patients with unexplained poor response or with unusually high vulnerability to side effects. But can ordering such tests paradoxically worsen treatment? There are various scenarios in which it might: