From The Carlat Psychiatry Report
Issue Links: Learning Objectives | Editorial Information | PDF of Issue
Treating agitation in dementia is no easy task. Behavioral interventions are first line, but they are difficult to implement and often insufficient. Psychotropics show modest benefits, but they are prone to causing adverse events. Benzodiazepines can precipitate falls, disinhibition, and confusion. Antipsychotics have a black box warning about an increased risk of death in older patients with dementia. Nuedexta recently stepped into this arena and, in doing so, created a controversy that threatens to cloud the science. In this article, I’ll clarify its role in dementia with agitation.

A medicine for pseudobulbar affect
Nuedexta is approved for pseudobulbar affect (PBA). This is a syndrome of sudden, uncontrollable laughing or crying that bears no relationship to the patient’s emotional state or social context or is far out of proportion to it. PBA is not a psychiatric disorder. It is caused by neurologic illnesses that disrupt the pathways involved in emotional regulation, such as the corticobulbar tracts and basal ­ganglia.

Inside Nuedexta
Nuedexta is a combination of two older medications: dextromethorphan and quinidine. Dextromethorphan is an over-the-counter cough suppressant that’s usually kept behind the counter because of its abuse potential. Doses between 100 and 600 mg can cause mild stimulation and euphoria, while doses above 500 mg can cause dissociative hallucinations (hence the abuse potential). Quinidine is generally used for arrhythmias but is included in this formulation to harness a drug interaction. As a potent inhibitor of CYP2D6, quinidine inhibits the enzymatic breakdown of dextromethorphan, thereby raising its serum level and extending its duration.

Dextromethorphan has psychoactive effects and is being explored for a number of psychiatric conditions, including opioid withdrawal, depression, negative symptoms of schizophrenia, and agitation associated with dementia. In addition to inhibiting the serotonin and norepinephrine transporters, dextromethorphan has unique properties. It is a sigma-1 agonist and noncompetitive antagonist of the NMDA glutamate receptor (Werling LL et al, Neurologist 2007;13(5):272–293).

Expansion into dementia
PBA is a syndrome that nearly always occurs as part of a neurologic disorder. When it was released in 2010, Nuedexta was indicated only in PBA due to multiple sclerosis or amyotrophic lateral sclerosis (ALS). Those were, and remain, the only conditions where Nuedexta has controlled evidence for PBA.

In 2015, the FDA allowed Nuedexta to broaden its indication to PBA as a whole, regardless of the cause. The drug had by that time shown benefits in a large but uncontrolled trial of PBA due to stroke, traumatic brain injury, and dementia (Hammond FM et al, BMC Neurol 2016;16:89). It’s with this last disorder that the use of Nuedexta started to expand.

Agitation is not part of PBA, but it’s a common feature of dementia that seemed to improve along with the PBA when Nuedexta was used in dementia. That led the manufacturer, Avanir Pharmaceuticals, to sponsor a 10-week randomized, placebo-controlled trial of dextromethorphan-quinidine in patients with presumed Alzheimer’s dementia and “clinically significant agitation” (Cummings JL et al, JAMA 2015;314(12):1242–1254). Trial participants showed modest reductions in both agitation and aggression.

With this evidence in hand, the company started encouraging physicians in long-term care facilities to use dextromethorphan-quinidine off-label for patients with dementia. But it didn’t stop there: Avanir also gave kickbacks in the form of money, travel, and food to physicians who prescribed Nuedexta (www.justice.gov/news, 9/26/2019).

While questionable, Avanir’s efforts paid off; prescriptions soared. A recent analysis of over 12,000 Nuedexta prescriptions found that over 50% were written for dementia and Parkinson’s disease (Fralick M et al, JAMA Intern Med 2019;179(2):224–230). The Department of Justice got wind of this, and in September 2019, Avanir agreed to pay over $108 million in fines. This story has soured Nuedexta’s reputation in dementia, but there might be something worth salvaging from this medication.

The evidence in agitation
When it comes to Nuedexta’s clinical evidence in dementia with agitation, the results are mixed. So far there have been three randomized, multicenter, double-blind, placebo-controlled trials, of which two were positive and one—the largest—was negative.

The first trial used a formulation of Nuedexta with slightly more dextromethorphan than what’s used for PBA (30 mg vs 20 mg). It found a small but significant reduction in the primary outcome: a single domain (Agitation/Aggression) of the Neuropsychiatric Inventory. The other trials are more difficult to interpret because they added deuterium, an isotope of hydrogen that, like quinidine, reduces the metabolism of dextromethorphan. These studies are unpublished, so we only know the bottom line. One trial used two dosages of the deuterium-Nuedexta formulation, with positive results in only one dosage. The other trial was negative.

Table: Clinical Trials of Nuedexta in Dementia With Agitation 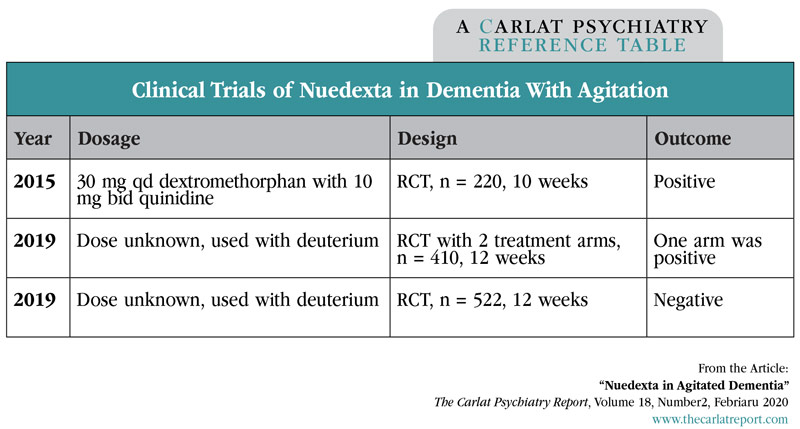 Generic jerry-rig
Nuedexta costs around $1,235 a month, making it an expensive choice. Ostensibly we should be able to purchase generic versions of dextromethorphan and quinidine, and dose the combination appropriately, but this is difficult as the 10 mg dosage of quinidine is no longer available. Fortunately, compounding pharmacies have sprung up around the country that have no problem creating a capsule or tablet containing dextromethorphan and/or quinidine. The one caveat is this: The FDA prohibits compounding a patented formulation. The workaround is to prescribe the quinidine as a compounded medicine and the dextromethorphan separately as a liquid ­prescription:


Alternatively, you can slightly alter the dose of one of the medications—for example, 30 mg dextromethorphan with 10 mg quinidine. There is no need to include deuterium. I spoke with two local compounding pharmacies, and they thought the cost would be between $45 and $80 a month.

Other options for agitation
Nuedexta may not have definite proof of its benefits, but it is safer than the antipsychotics and benzos. In terms of efficacy, all of these options are questionable. Recent meta-analyses of agitation in dementia found a small effect size for antipsychotics and no benefit for benzodiazepines. Nuedexta’s effect size was medium in those analyses, but they only included the positive study (Watt JA et al, Ann Intern Med 2019;171(9):633–642; Tampi RR et al, Am J Alzheimers Dis 2014;29(7):565–574).

Another path to consider is the SSRIs. There are two randomized, placebo-controlled trials of SSRIs for behavioral symptoms of dementia, and both are positive, albeit with modest benefits. One involved sertraline (50–200 mg qd), the other citalopram (30 mg qd) (Seitz DP et al, Cochrane Database Syst Rev 2011;CD003154). Sertraline was the better tolerated of the two. Citalopram caused a mild worsening of cognition and prolonged the QTc interval by 18 milliseconds on average.

TCPR Verdict: Non-pharmacologic options exist that are safer than medications and outperformed pharmacologic treatments in a meta-analysis of agitation in dementia (Watt JA et al, Ann Intern Med 2019;171(9):633–642). These include music therapy, structured activity, outdoor activity, a safe place to walk, massage, touch therapy, empathic communication skills, and offering the patient simple choices.
To learn more, listen to our 2/17/20 podcast, “Agitation in Dementia: When the Best Medicine Is Not a Medication.” Search for “Carlat” on your podcast store.
General Psychiatry
KEYWORDS dementia generics nuedexta pharmaceutical_industry pseudobulbar-affect