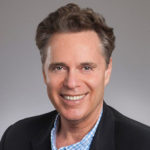 William P. Timmie Professor of Psychiatry and Behavioral Sciences, Emory University, GA Dr. Miller has disclosed that he has no relevant financial or other interests in any commercial companies pertaining to this educational activity.

TCPR: What is inflammation?
Dr. Miller: Inflammation is the body’s natural response to infection or wounding. It’s important for survival, but if it goes on too long it damages the body in various ways. It contributes to heart disease, cancer, metabolic disorders, and neurodegenerative disorders. Ultimately, it can change set points in the brain that influence behavior. 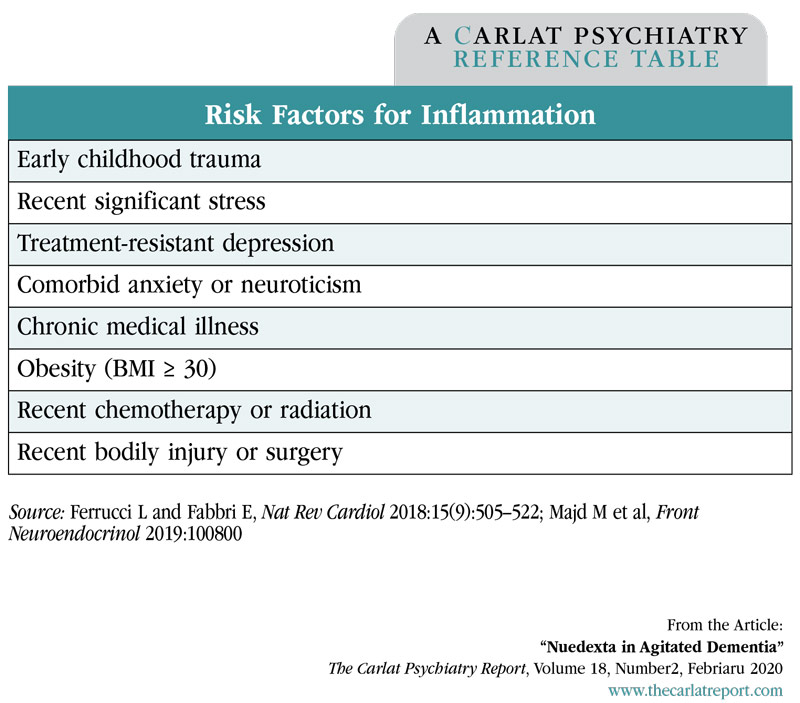 TCPR: How do you confirm inflammation once it’s suspected?
Dr. Miller: The most widely accepted standard is the C-reactive protein, or CRP. This is a protein that is produced by the liver in inflammatory states. The American Heart Association and the Centers for Disease Control and Prevention consider a CRP greater than 3 mg/L to be a marker of high inflammation. This is a low-cost lab that’s usually ordered to predict the risk of heart disease. In psychiatry, you need to order it as a high-sensitivity CRP because the regular-sensitivity CRP generally does not pick up the lower levels below 3 that can inform practice.

TCPR: Does CRP have a different cutoff for inflammation in psychiatry?
Dr. Miller: We don’t have a universally accepted cutoff in psychiatry. Some studies have used 1 mg/L. For example, a CRP above 1 mg/L predicts a more favorable response to bupropion than to an SSRI. Inflammation is on a spectrum, and the higher the CRP is, the more inflamed the patient tends to be (Jha MK et al, Psychoneuroendocrinology 2017;78:105–113). For the purposes of this interview, I’ll use a cutoff of 3 mg/L when referring to “inflammation.”

TCPR: Is CRP ready for prime time in psychiatry?
Dr. Miller: I believe it is. There are other markers of inflammation, like interleukin-6 (IL6), but these tests are not as stable as CRP. They tend to fluctuate with circadian rhythms and acute stress, including the stress of a venous puncture when blood is drawn. CRP has a long half-life, so it stays more constant and is not as vulnerable to those perturbations.

TCPR: What can cause a false positive with CRP?
Dr. Miller: False positives are rare, but I’d consider them if your patient has a high CRP but no clear reason to be inflamed. Sometimes we see a false positive from an acute infection, like an upper respiratory infection, or from seasonal allergies. When you suspect something like that, I would repeat the test later.

TCPR: How do patients with inflammation look in the office? Are their symptoms any different from patients with non-inflammatory depression?
Dr. Miller: Based on what we know about the impact of inflammation on neurotransmitter systems and neurocircuits that regulate motivation and motor activity as well as anxiety and alarm, the typical patient with high inflammation would be expected to have anhedonia and low motivation (Miller AH and Raison CL, Nat Rev Immunol 2016;16(1):22–34). There’s a global lack of pleasure and enjoyment. They may also have prominent anxiety, fatigue, and psychomotor retardation. Although these symptoms are seen in many depressed patients, their occurrence in combination with an elevated CRP would raise the suspicion that they may stem from inflammation.

TCPR: What about aging? Is that an inflammatory process?
Dr. Miller: Yes, and there’s even a word for it: “inflammaging.” Inflammation accelerates aging, both in the body and the brain, which can make patients look older than their stated age. We tend to see lower levels of CRP in adolescents with depression, but inflammation can happen at any age.

TCPR: Some of the psychiatric studies on inflammation have focused on obesity. Why is that?
Dr. Miller: Obesity also has a very high overlap with inflammation. Fat cells grow quickly and outstrip their blood supply, which causes those cells to die. Inflammation is a response to injury and cell death. Also, the Western diet—fast food, fried food, processed and sugary foods—contributes to inflammation through various mechanisms, such as increased intestinal permeability, which is also called leaky gut.

TCPR: What is leaky gut?
Dr. Miller: Leaky gut means that microbial products have penetrated from the gut into the circulation. Once in the bloodstream, they trigger immune cells to produce inflammatory cytokines. One way to prevent leaky gut is through diet, like the Mediterranean-style diet. A healthy diet is rich in fiber, which gives the gut bacteria something to chew on. If there isn’t enough fiber in the diet, they will eat away at the gut lining, causing it to get thin and leak into the circulation. Diets high in sugar or saturated fats can also disrupt the gut microbiome in ways that lead to leaky gut, as can heavy alcohol use. We see this syndrome of leaky gut more often in Crohn’s disease, inflammatory bowel disease, and ulcerative colitis, and it can also be a pathway to depression.

TCPR: Patients often report higher levels of depression in the months after a surgery. Can inflammation explain that?
Dr. Miller: Yes. Patients often attribute those changes to the anesthetic agents they’ve received, which makes sense because they are psychoactive drugs. However, inflammation both during and after surgery is associated with mood and cognitive problems.

TCPR: What do we do when we see a patient with depression, inflammation, and an elevated CRP?
Dr. Miller: There are a handful of randomized controlled trials that can guide us. An elevated CRP predicts a better response to dopaminergic or norepinephrine agents and a poorer response to SSRIs. The first study that looked at this compared nortriptyline to escitalopram (Lexapro) in 241 patients with depression. The patients with a high CRP > 3 mg/L did better on nortriptyline, while those with a low CRP below 1 mg/L did better on the escitalopram (Uher R et al, Am J Psychiatry 2014;171(12):1278–1286). More recently we have the CO-MED trial, which looked at bupropion augmentation of an SSRI (escitalopram) in 106 patients with major depression. When the results were first published in 2011, bupropion augmentation worked no better than a placebo. Later, the researchers parsed out the data by inflammatory markers. It turned out bupropion worked in the subset of patients with a mildly elevated CRP (> 1 mg/L), while the SSRI monotherapy worked better when the CRP was low (Jha MK et al, Psychoneuroendocrinology 2017;78:105–113). 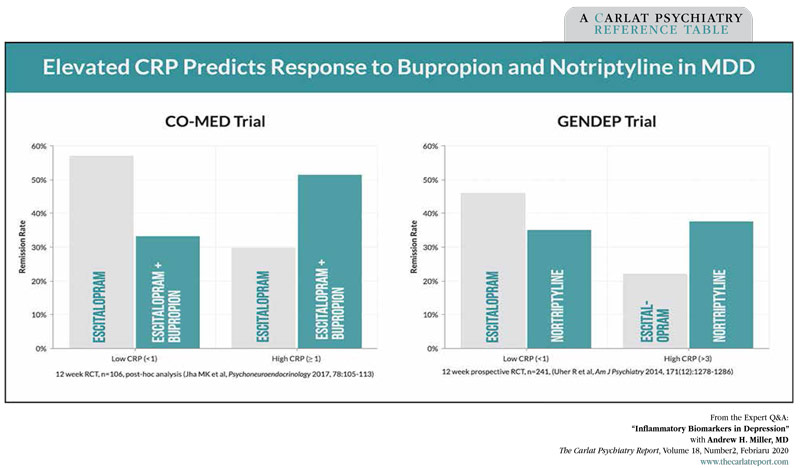 TCPR: Why do dopaminergic medications work better during inflammation?
Dr. Miller: Based on our preclinical data, it makes sense that we’d see these results with a dopaminergic medication like bupropion. Inflammation has a profound effect on the availability of dopamine in the CNS. That’s why these patients have such marked anhedonia; their reward pathways are turned down. Dopamine is where I would go first in a patient with inflammation, and that might include bupropion, pramipexole, or even L-dopa. Pramipexole works in treatment-resistant depression, and L-dopa has small studies in depression and treats psychomotor slowing, which is something we see during inflammation (Gauthier C et al, Clin Neuropharmacol 2017;40(6):264–267; Rutherford BR et al, Biol Psychiatry 2019;86(3):221–229). The pramipexole and L-dopa studies did not measure inflammatory biomarkers, but in the case of L-dopa we have animal studies that show an association (Ed note: For more on pramipexole, see the “How to Use Pramipexole” sidebar).

Table: Treatments to Consider During Inflammation 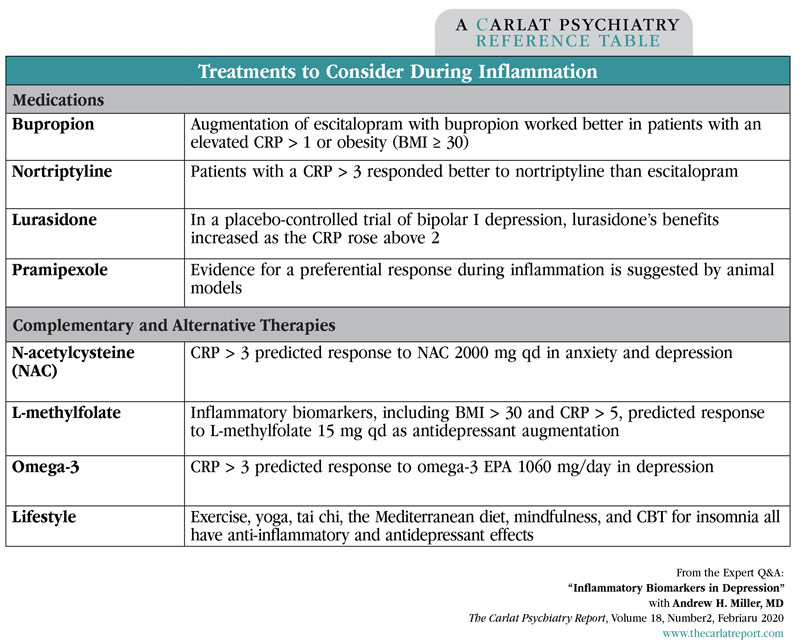 TCPR: Why are serotoninergic medications less effective during inflammation?
Dr. Miller: Inflammation activates the serotonin transporter, increasing both its expression and its function. The result is that serotonin is cleared more rapidly from the synapse. SSRIs target that transporter, and it’s harder for them to make an impact when there is a greater volume and number of those transporters. So we have two studies showing that escitalopram does not work as well in depressed patients with inflammation, but the data are by no means definitive.

TCPR: Last year a meta-analysis identified about a dozen anti-inflammatory treatments that work in depression. Would you use these in inflammatory states?
Dr. Miller: That we don’t know, because most of those studies did not measure inflammatory biomarkers, and sometimes when they have, the expected correlation did not appear (Savitz JB et al, Transl Psychiatry 2018;8(1):27). So we don’t really know how anti-inflammatories like minocycline and the COX-2 inhibitors are working. We do have some evidence, though, that omega-3s and L-methylfolate work better when inflammatory biomarkers are elevated. L-methylfolate is an essential cofactor in the production of dopamine, and inflammation hinders that particular pathway, so there’s reason to think that L-methylfolate would be especially useful in the context of inflammation (Shelton RC et al, J Clin Psychiatry 2016;76(12):1635–1641; Rapaport MH et al, Mol Psychiatry 2016;21(1):71–79).

TCPR: What lifestyle advice would you give to a patient with inflammation?
Dr. Miller: Weight loss, diet, and exercise are particularly important. Shifting to a Mediterranean diet is associated with lower rates of depression and lower inflammatory biomarkers. Other ideas to consider are meditation, yoga, and tai chi. Those practices are associated with activation of the parasympathetic nervous system, and that in turn reduces inflammation. You can retest CRP after a patient has made those lifestyle changes—it’s likely to go down. Antidepressant therapy, on the other hand, does not lower inflammatory markers, even when it’s dopaminergic. So it’s treating the symptom more than the cause.

TCPR: That sounds like a problem.
Dr. Miller: It’s still important to address the inflammation in these patients because inflammation will continue to raise the risk of heart disease, cancer, and other health problems. Of course, those lifestyle changes are easier to make after depression is treated.

TCPR: Thank you for your time, Dr. Miller.


To learn more, listen to our 2/10/20 podcast, “Inflammation and Depression: An Interview With Dr. Miller.” Search for “Carlat” on your podcast store.