Home » “What About the Implant, Doc?” Appraising Various Formulations of Buprenorphine

“What About the Implant, Doc?” Appraising Various Formulations of Buprenorphine

Edmund S. Higgins, MD.
From The Carlat Addiction Treatment Report
Issue Links: Learning Objectives | Editorial Information
Edmund S. Higgins, MD. Clinical Associate Professor of Psychiatry and Family Medicine, MUSC, Charleston, SC. Dr. Higgins has disclosed that he has no relevant financial or other interests in any commercial companies pertaining to this educational activity.
With other epidemics in the world dominating our attention, let’s not forget the epidemic of opioid-related deaths. Unlike the current viral epidemic, the opioid epidemic is eminently treatable. The figure on page 3 shows the reduction in heroin overdoses in Baltimore, MD, as increasing numbers of patients received opioid agonist treatment (Schwartz RP et al, Am J Public Health 2013;103(5):917–922). Rarely, if ever, do we see a mental health treatment have such a profound positive effect on a community that the results can be measured with epidemiologic data.

Opioid agonists are the gold standard for treating opioid use disorder (Schuckit MA, NEJM 2016;375(4):357–368). Although some patients may find methadone a better fit, the side effect profile, safety, and lesser regulatory restrictions of buprenorphine make it a more appealing choice for many patients. Patients and clinicians face a variety of delivery mechanisms for buprenorphine, which we review here.

Sublingual and transdermal formulations
Buprenorphine was first marketed in the US in 1985 as an injectable for chronic pain, but in 2002 two tablet formulations (buprenorphine as monotherapy or buprenorphine in combination with naloxone) received FDA approval for opioid use disorder and could be used in office-based practice. This was a game-changer: Opioid agonist treatment no longer required daily appearance at a specialty clinic.

Buprenorphine undergoes extensive first-pass metabolism in the liver and is largely unavailable if swallowed, so most buprenorphine is prescribed via a sublingual route. The addition of naloxone may deter misuse as it will dampen the medication’s effect if snorted or injected. There are no large-scale studies comparing buprenorphine with buprenorphine/naloxone, but based on small uncontrolled studies, the general consensus is that they are equally effective at reducing cravings and illicit opioid use, while the combination tablet is less likely to be misused (Crotty K et al, J Addict Med 2020;14(2):99–112). Consequently, buprenorphine/naloxone, which can be administered as a tablet or as a buccal or sublingual film, is the recommended first choice.

However, naloxone is contraindicated in patients who are hypersensitive to the medication, and it should be used with caution in patients who are pregnant (or breastfeeding) due to fetal exposure and in those at risk for hepatic injury, for whom it can be hepatotoxic (Crotty K et al, 2020).

Buprenorphine is also available in a transdermal patch (Butrans) for the treatment of moderate to severe chronic pain. The formulation allows a constant, slow release of the medication over 7 days. There are scant studies using the patch for opioid use disorder (with some case studies for detoxification), and the patch does not offer a clear benefit over other formulations, so it probably shouldn’t be used unless chronic pain is a concomitant problem. Furthermore, dose recommendations for chronic pain tend to be lower than those recommended for treatment of opioid use disorder. See the table below for a summary of buprenorphine formulations. 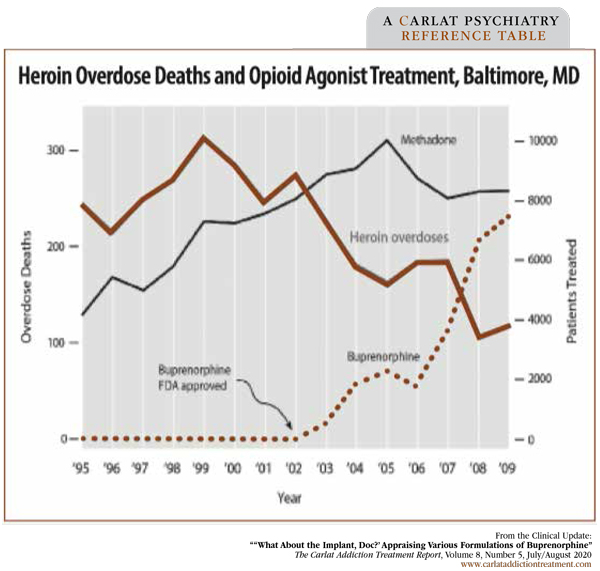 Injectable and implantable formulations
Injectable buprenorphine is an effective treatment that may not need to be taken daily, provides less fluctuation in medication levels, and can’t be misused or diverted when used in controlled settings. Called buprenorphine XR or depot, the medication is injected subcutaneously where it turns to a solid, slowly releases buprenorphine, and eventually dissolves.

Sublocade was the first injectable buprenorphine for the treatment of opioid use disorder and FDA approved in 2017. In its Phase III trial, patients at 36 treatment centers with moderate to severe opioid use disorder received a 2-week open-label run-in with sublingual buprenorphine/naloxone (Haight BR et al, Lancet 2019;393(10173):778–790). Five hundred and four patients were randomly assigned to one of three arms—placebo injection, buprenorphine XR 300 mg monthly for 6 months, or buprenorphine XR 300 mg monthly for 2 months followed by 100 mg for 4 months. Everyone also received individual drug counseling during the study. Patients receiving active medication were more likely to be abstinent, had fewer cravings and withdrawal symptoms, and were more likely to stay in treatment. Sublocade’s safety profile is similar to other buprenorphine products. The preferred dosing is 300 mg for 2 months, followed by monthly injections of 100 mg. However, patients with more severe problems may do better with 300 mg every month. This issue is still being studied. Cost also factors in: According to www.drugs.com, Sublocade costs $1,741 monthly.

A second subcutaneous depot medication (Brixadi) received FDA approval to be available in December 2020. Brixadi is like Sublocade but has a few unique features: Only one dose of sublingual buprenorphine is required prior to initiation, and the medication can be dosed weekly or monthly. In the pivotal study, 428 patients were randomly assigned to sublingual buprenorphine/naloxone or subcutaneous buprenorphine weekly injections for the first 12 weeks followed by monthly injections for the next 12 weeks (Lofwall MR et al, JAMA Intern Med 2018;178(6):764–773). Additionally, both groups received a placebo of the formulation to which they were not assigned—so everyone was taking something sublingually and subcutaneously. The clinicians were allowed to adjust the doses based on patient needs. Withdrawal symptoms, cravings, and retention were similar in both groups. However, the subcutaneous depot groups had significantly fewer opioid-negative urine samples.

The implantable version—Probuphine, a matchstick-sized polymer matrix that oozes buprenorphine—is inserted under the skin on the inner side of the arm where it can remain effective for up to 6 months. Standard treatment calls for 4 implants inserted by a trained clinician, with removal after 6 months. In a study of 168 patients randomly assigned to active or placebo implants after initiation with sublingual buprenorphine/naloxone for at least 3 days, those in active treatment had fewer positive urine samples for illicit opioids, fewer withdrawal symptoms, fewer cravings, and fewer treatment failures—none, actually (Ling W et al, JAMA 2010;304(14):1576–1583). Probuphine’s safety profile was similar to other studies with the addition of some adverse events related to the implant site (swelling, itching, pain, and infection—over 50% in both groups). The implants offer an effective treatment with less concern for adherence. However, they’re not cheap. According to www.drugs.com, the cost of the implants is $5,176 for 6 months (insertion costs not included) compared to $95 per month for generic buprenorphine/naloxone at an equivalent dose (about 8 mg per day).

CATR Verdict: Buprenorphine is an effective and safe treatment option with a variety of formulations that can improve adherence and reduce misuse or diversion. There is little reason to believe one formulation is superior to another, although XR formulations may be preferred when adherence is an issue and SL formulations when cost is the biggest concern. 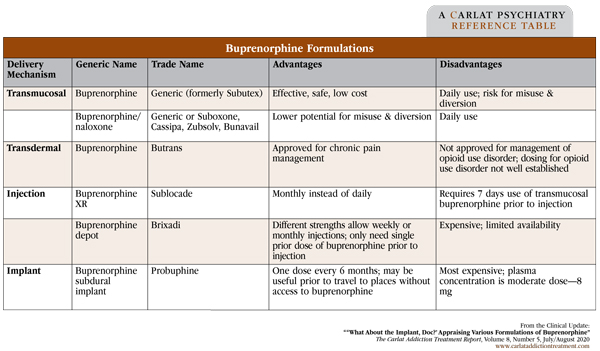 Light Therapy: Good for What Ails You?