Home » Keeping Up With Trintellix

Keeping Up With Trintellix

Michael Posternak, MD.
From The Carlat Psychiatry Report
Issue Links: Learning Objectives | Editorial Information | PDF of Issue
Michael Posternak, MD. Psychiatrist in private practice, Boston, MA. Dr. Posternak has disclosed that he has no relevant financial or other interests in any commercial companies pertaining to this educational activity.
In a previous report (TCPR, Feb 2019), we summarized the data on cognitive effects associated with vortioxetine (Trintellix). We found that vortioxetine produced impressive results for cognition based on improvement on the Digital Symbol Substitution Test (DSST), and gave Takeda Pharmaceuticals high marks for choosing to compare vortioxetine to duloxetine—the antidepressant with the best cognitive data to date. This notwithstanding, we also questioned how clinically meaningful those cognitive enhancements were. But Takeda has hardly put all its eggs in one basket. In this article, I’ll review the many other lines of research that have since been pursued.

Does vortioxetine offer anything unique for depression?
Whenever an antidepressant with a novel mechanism of action is introduced, it invariably offers hope for our patients suffering from treatment-resistant depression (TRD). Vortioxetine works on the serotonergic system as a partial agonist, antagonist, and reuptake inhibitor, and its mechanism of action is considered distinct from SSRIs. As we learned from STAR*D, however, hitting different neurotransmitters doesn’t necessarily translate into better outcomes.

Vortioxetine has never actually been studied for TRD. It did demonstrate initial promise when it outperformed agomelatine using a less stringent definition of treatment resistance: 1 failed trial rather than the usual 2 or more. In that study, 493 patients who had failed to respond to an adequate trial of an SSRI or SNRI were randomized in a double-blind manner to receive either vortioxetine 5–10 mg/day or agomelatine 25–50 mg/day. Agomelatine is a melatonergic and 5-HT2C antagonist that is licensed in Europe as an antidepressant, though has never been approved in the US. Patients randomized to vortioxetine displayed significantly higher response (70% vs 56%, p < 0.01) and remission rates (55% vs 39%, p < 0.001) after 12 weeks of treatment (Montgomery SA et al, Hum Psychopharmacol 2014;29(5):470–482).

Given how rare it is for one antidepressant to beat another, that study was truly noteworthy. Unfortunately, its results have never been replicated. When vortioxetine has gone head-to-head with traditional antidepressants like duloxetine and sertraline, it has never beaten them, and in fact an industry-sponsored meta-analysis concluded that vortioxetine was no more effective than other antidepressants (Llorca PM et al, Curr Med Res Opin 2014;30(12):2589–2606). Thus, at this time, there is no reason to believe that vortioxetine provides anything novel for treatment-resistant depression.

Anxiety disorders
Unlike the SSRIs, vortioxetine has no FDA indication other than major depression. That is not, however, for lack of trying. After an initial positive study (n = 301) in non-depressed patients with generalized anxiety disorder (GAD) (Bidzan L et al, Eur Neuropsychopharmacol 2012;22(12):847–857), three subsequent trials using vortioxetine for GAD each failed to separate from placebo. A recent meta-analysis concluded that vortioxetine (n = 1068) was superior to placebo in GAD (n = 609), but the effect size was very small (0.12), less than other pharmacologic agents, and remission rates were not even superior to placebo (Pae CU et al, J Psychiatr Res 2015;64:88–98).

If there’s a role for vortioxetine in GAD, it may be for those with severe symptoms as this group appeared to fare much better in post-hoc analyses. Additionally of note, a long-term maintenance study found that GAD patients who had responded to vortioxetine relapsed 3 times more frequently when switched to placebo (Baldwin DS et al, Int Clin Psychopharmacol 2012;27(4):197–207).

This does not mean that vortioxetine doesn’t work in anxious depression. As with most antidepressants, anxiety symptoms improved when depression was treated with vortioxetine (Baldwin DS et al, J Affect Disord 2016;206:140–150).

Schizophrenia
Though not typically conceptualized as a depressive syndrome, the negative symptoms of schizophrenia share many features in common with major depression. Although the role of antidepressants for treating negative symptoms of schizophrenia remains a matter of debate, vortioxetine’s pro-cognitive effects lend credence to a potential role here. A recent study tested this possibility in 78 inpatients who had been stabilized on 4–6 mg/day of risperidone. Patients randomized to vortioxetine 20 mg/day (n = 34) improved significantly more than those randomized to adjunctive placebo (n = 34) on negative (but not positive) symptoms, with a large effect size of 0.97 over the course of 8 weeks (Moazen-Zadeh E et al, J Psychopharmacol 2020;34(5):506–513

Sexual side effects
Vortioxetine has less direct serotonergic effects than SSRIs, with estimated serotonin transporter occupancy rates of 50%, 65%, and 80% at 5 mg, 10 mg, and 20 mg respectively (occupancy rates for SSRIs are 80% and above). As such, we might expect vortioxetine to have fewer sexual side effects than the SSRIs, and indeed this seems to be the case. In a large study of patients who had responded to an SSRI but experienced sexual side effects, participants were randomized to switch to either escitalopram (10–20 mg; n = 222) or vortioxetine (10–20 mg; n = 225). Patients receiving vortioxetine showed significantly greater improvement in sexual functioning than those randomized to escitalopram (p = 0.01) (Jacobsen PL, J Sex Med 2015;12(10):2036–2048).

Age-related cognitive decline
Vortioxetine improves cognition in depressed patients, but what about the age-related cognitive decline in people who aren’t depressed? This study enrolled 100 patients over age 65 who had cognitive complaints that would not qualify for dementia (they were no more than 1 standard deviation off on a cognitive battery). All subjects engaged in a computerized cognitive training program (HappyNeuronPro) for about 20 minutes a day. Those randomized to vortioxetine had greater cognitive improvements than subjects randomized to placebo. The improvement was gradual and became statistically significant after 3 months, with a moderate effect size of 0.6 (Lenze EJ et al, Am J Psychiatry 2020;177(6):548–555). An effect that size should be noticeable to the casual observer, so these results—if they can be replicated—provide tantalizing promise that vortioxetine’s pro-cognitive effects are clinically meaningful.

TCPR Verdict: There is nothing to suggest that vortioxetine offers the diverse benefits of the SSRI class even if it does promise less sexual side effects. Its primary calling card, therefore, remains its pro-cognitive effects. Given the paucity of options for enhancing cognition and the multitude of more cost-effective choices for treating depression, it wouldn’t be surprising if vortioxetine ends up having more of a role for treating cognition than it does for depression. 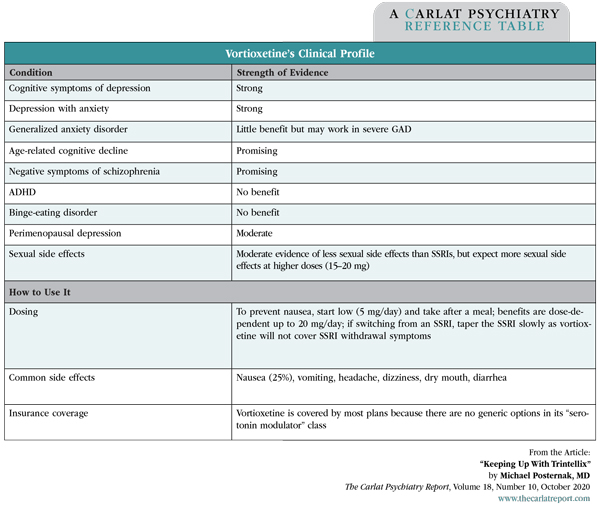