Jesse Koskey, MD.
From The Carlat Addiction Treatment Report
Issue Links: Learning Objectives | Editorial Information
Jesse Koskey, MD. Psychiatrist at Kaiser Permanente, CA. Dr. Koskey has disclosed that he has no relevant financial or other interests in any commercial companies pertaining to this educational activity.
Discussing a patient’s spiritual life might not be something you do routinely. Conversations can be time-consuming, uncomfortable, or seemingly irrelevant to treating a substance use disorder (SUD). But studies have shown that faith can be an asset in addiction treatment. Patients may want to discuss their spiritual lives with you or have questions about faith-based rehabilitation or 12-step programs such as Alcoholics Anonymous (AA). What is the relationship between faith and SUD, and how can faith inform treatment?

What is faith?
Faith has two main components. Religion is a shared set of beliefs and practices; spirituality refers to individual beliefs or practices. Twin studies suggest that religious beliefs are likely the result of environmental factors including culture, whereas spiritual experiences are at least partially genetically encoded (Schoenthaler SJ et al, J Reward Defic Syndr 2015;1(1):36–45). One way to get a sense of a patient’s religious and spiritual makeup is to take a spiritual inventory; FACT is a mnemonic that may be helpful (see table below). Treatment programs may also emphasize religion and spirituality differently. For example, care provided by government-funded Catholic hospitals emphasizes religion but not spirituality; 12-step programs like AA evoke spirituality but not religion (Grim BJ and Grim ME, J Relig Health 2019;58(5):1713–1750).

Faith and addiction risk
Although researchers do not use these terms uniformly, measures of both religion and spirituality largely correlate with lower rates of substance use and better response to treatment. A 2012 report found that 90% of 145 studies examining the relationship between unhealthy alcohol use and faith reported an inverse correlation; for drug use, 84% of 185 studies reported this same correlation (Koenig HG et al. Handbook of Religion and Health. New York, NY: Oxford University Press; 2012). In a 1995 nationwide survey, Americans with SUD were less likely to have relapsed when they reported higher rates of faith-related activities, such as attending religious services or praying. Crack cocaine was the one drug for which the relationship between faith-related measures and use was not inverse. The researchers speculated that this was due to a “negativistic” belief system more associated with poverty than crack (Schoenthaler et al, 2015).

Leveraging faith in treatment planning
Theoretically, most of our patients could benefit from the generally protective effect of faith. About 80% of Americans reported believing in God in a 2017 Gallup poll, and in another survey, 84% of addiction counseling patients responded that spirituality should be emphasized in their treatment (Grim and Grim, 2019). Communities that tend to engage more frequently in religious practices, including African Americans, Protestants, women (Moscati A and Mezuk B, Drug Alcohol Depend 2014;136:127–134), and Hispanics (Hidalgo BE et al, J Relig Health 2019;58(4):1340–1355), may benefit more from faith than others.

A retrospective study of African Americans and whites with opioid use disorder (OUD), for example, found that African Americans who attended church more frequently than their peers had lower rates of OUD in the mid-2000s. This effect was not present for whites, and it had disappeared for African Americans by the next decade, which researchers thought was likely due to the waning cultural importance of religion (Ransome Y et al, Drug Alcohol Depend 2019;205:107615). Other research has shown that African Americans with cocaine use disorder may be particularly likely to benefit from speaking with clergy members about their addiction (Cheney AM et al, J Drug Issues 2014;44(1):94–113).

Positive religious coping and social networks
Two ideas are helpful for understanding how religion and spirituality assist with overcoming addiction: positive religious coping (PRC) and social networks. PRC refers to anything helpful that believers do to draw on religion during difficult life situations. Examples include prayer, internalizing religious norms, and believing that one will receive assistance from religion.

Examples of how spirituality can help with addiction come from AA. Particularly for patients with mild to moderate SUD, AA’s benefits may come from forming social networks that are supportive of sobriety. For severely addicted patients, AA’s mechanism may relate more to the deeper sense of spiritual change emphasized by its founder (Kelly JF, Addiction 2017;112(6):929–936). This itself may be a form of PRC.

Keep PRC and social networks in mind while conducting your FACT spiritual inventory with patients (see table). Does a patient sing in the church choir to contribute to the service, or because it’s a paying job for a music major? Does a patient who participates in a weekly yoga class as a spiritual practice also have a tradition of joining classmates for mimosas afterwards? The details will give you a sense of whether you or the patient might consider faith a part of the treatment plan. 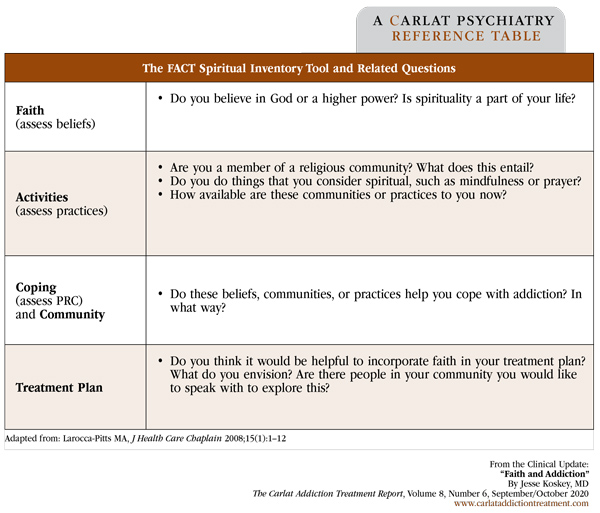 CATR Verdict: The patients most open to incorporating faith into their addiction treatment are the patients most likely to benefit from doing so. To get a sense of how you might work with a patient’s faith, conduct a spiritual inventory. Encourage patients to keep up congregational attendance, stay engaged with a faith-based community, or continue a habit of prayer or mindfulness. For patients likely to benefit from PRC and inclined to do so, scheduling a meeting with a trusted religious leader may help.
Addiction Treatment
KEYWORDS alcohol alcohol-use-disorder connections opioid-use-disorder opioids treatment
Jesse Koskey, MD.

SUBSCRIBE NOW
Table Of Contents
CME Post-Test - Social Aspects of Addiction, CATR, September/October 2020
A Timely Look at Community Reinforcement for Seniors With Unhealthy Alcohol Use
Under the Pandemic Influence
Despair, Loneliness, and Substance Use Disorders
Gambling and Impulsive Buying: Behavior or Addiction?
Faith and Addiction
Is AA the Toast of the Town?
Featured Book
Featured Video
Featured Podcast
Recommended