The top three most frequently misused OTC medications are the cold medication dextromethorphan (DXM), antihistamines, and decongestants with stimulant-like properties (see table below). We’ll review what you should know about each of these medications and what to do about patient misuse.

Dextromethorphan
DXM, a cough suppressant primarily found in cold medications, is the most commonly misused OTC drug (Schifano F et al, Front Psychiatry 2021;12:657397). Although it is an analog of codeine, DXM has no effect on opioid receptors and is not an analgesic. You’ve probably heard about it as the active ingredient of Nuedexta, a treatment for pseudobulbar affect. Nuedexta is DXM packaged with quinidine, the latter being present only to inhibit 2D6 metabolism of DXM, thereby raising its level.

DXM’s active metabolite is dextrorphan, an N-methyl-D-aspartate (NMDA) antagonist that inhibits the excitatory neurotransmitter glutamate, causing sedative, dissociative, and hallucinogenic states. These effects typically start 30–60 minutes after a dose and can last up to six hours. Slang terms you might hear include “robo-tripping,” which refers to intentionally taking large doses, and “triple C’s,” which stands for Coricidin Cough & Cold, a common medication brand that contains DXM.

DXM’s psychoactive effect is dose dependent. A small dose of intentionally misused DXM is usually 100–200 mg (which is already higher than the usual cough suppressant dose of 30 mg every 6–8 hours). At this level, patients will experience mild stimulation, some restlessness, and euphoria. Large doses, as much as 1500 mg, can cause intense hallucinations, dissociation, paranoia, delusions, out-of-body experiences, and a loss of motor coordination (Dept of Justice/DEA Drug Fact Sheet, 2020; www.tinyurl.com/d4ts3a6e).

DXM misuse is associated with many potentially dangerous effects. While acutely intoxicated, people can experience autonomic instability (fluctuations in blood pressure and heart rate), gastrointestinal distress (diarrhea or constipation), and a host of neurological problems such as amnesia, ataxia, dystonia, hallucinations, and seizures. Chronic DXM misuse can be detrimental to the nervous system, causing psychosis, cognitive impairment, and peripheral neuropathy.

Other side effects are not due to DXM itself, but to other components in its formulation. For example, DXM is often sold as dextromethorphan hydrobromide, which can cause the rare syndrome of bromide toxicity, called bromism. This is characterized by a wide array of psychiatric symptoms, including psychosis, seizures, and delirium, along with a characteristic pustular rash. DXM may be coformulated with agents that have their own toxicities, most notably acetaminophen, chlorpheniramine, and pseudoephedrine. Finally, combining DXM with serotonergic agents risks serotonin syndrome, so be cautious when prescribing antidepressants to patients who are known to misuse DXM.

Because of the potential for misuse, some states have begun to restrict OTC DXM sales as well as enforce a minimum age, typically 18, for DXM purchase. A few states have imposed a maximum amount that a person can purchase or possess, and still others have begun to require a prescription. 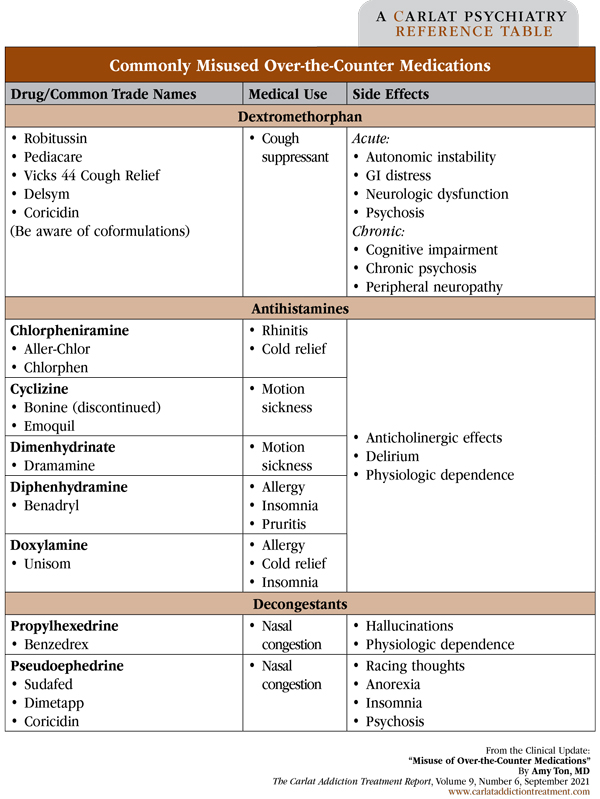 Antihistamines
Antihistamine misuse had a moment in the spotlight in 2020. In a sweeping ­TikTok trend called the “Benadryl Challenge,” people were encouraged to take supratherapeutic doses of diphenhydramine and film the effects. The trend was widespread enough that the FDA posted a warning about its dangers (www.tinyurl.com/ksas4rap).

OTC antihistamines come in two flavors: first generation, which readily cross the blood-brain barrier, and second generation, which do not. Given their CNS effects, commonly misused antihistamines are almost always first generation. These include diphenhydramine (Benadryl), doxylamine, dimenhydrinate, cyclizine, and chlorpheniramine. They antagonize central H1 receptors and peripheral acetylcholine receptors to relieve allergies and nausea.

At low doses (eg, 25–50 mg diphenhydramine), antihistamines cause sedation and anxiolysis, but at higher doses (eg, 300 mg up to > 1000 mg), their anticholinergic properties can cause delirium, hallucinations, and even transient psychosis, especially in individuals with mental illness or concomitantly using other substances. Though typically sedating, antihistamines can be activating and stimulant-like when combined with other drugs such as cannabis and stimulants (Schifano et al, 2021).

Clinicians may be surprised to learn that many antihistamines are also anticholinergic. In fact, most side effects of antihistamine misuse (tachycardia, dry mouth, blurred vision, constipation, urinary retention, and delirium) come from this activity. Chronic overuse can lead to physiologic dependence, with patients experiencing cravings, insomnia, irritability, GI distress, and withdrawal symptoms. The only evidence-based approach to treating patients who are physiologically dependent is with a gradual taper as tolerated.

Decongestants
Pseudoephedrine and propylhexedrine are nasal decongestants that are increasingly being misused for their stimulant-like effects at high doses (Aschenbrenner DS, Am J Nurs 2021;121(7):24). These medications are sympathomimetic agents, increasing monoamine release and activity on alpha-, beta1-, and beta2-adrenergic receptors.

Some patients misuse these drugs for their euphoric effects, but others use them to suppress appetite, boost athletic performance, or improve concentration. Pseudoephedrine, of course, is also used in the illicit manufacture of methamphetamine. Pseudoephedrine is usually sold as tablets or as a syrup, so people typically consume it orally. Propylhexedrine is also misused orally but is generally sold as a nasal spray—patients either mix the medication with water and drink the resulting solution or swallow the medication-soaked cotton ball contained inside the inhaler.

Side effects of these medications are like those of methamphetamine. Acutely, and at lower doses (misuse starts at > 250 mg pseudoephedrine daily), patients experience euphoria, insomnia, anorexia, and accelerated thinking. Higher doses (up to 1500 mg pseudoephedrine daily) can cause florid psychosis with intense auditory and visual hallucinations, persecutory delusions, and disorganized thought patterns (www.tinyurl.com/d4ts3a6e). And like many commonly misused drugs, long-term decongestant misuse can result in physiologic dependence. There have been multiple reports of withdrawal symptoms, including dysphoria, restlessness, persistent abnormal perceptions, and depression (Alevizos B, Eur Psychiatry 2003;18(8):423–425).

Unlike antihistamines, OTC sale of pseudoephedrine is federally regulated, and the drug is kept “behind the counter” throughout the US.

Working with patients
Clinicians often don’t ask about OTC drug misuse, and patients typically don’t report it. Without any validated screening tools, OTC drug misuse can easily fly under the radar. Be sure to ask patients explicitly about OTC drugs and whether they take the drugs recreationally. For adolescents, practice guidelines suggest interviewing parents and patients separately, especially when it comes to asking about substance use (Gracious B et al, J Child Adolesc Psychopharmacol 2010;20(6):521–524).

There is little research on how to treat OTC medication misuse. The best treatment is prevention of use, which entails educating patients about the toxicity risks. The therapies employed in any substance use disorder can be helpful, such as cognitive behavioral therapy, contingency management, and motivational interviewing.

CATR Verdict: The three most commonly misused classes of OTC medication all have potential for serious medical and psychiatric side effects, which many clinicians and patients are unaware of. Ask patients explicitly about their use of these medications and use psychotherapy and behavioral techniques for treatment.
Addiction Treatment
KEYWORDS drug-misuse over-the-counter teens
Amy Ton, MD,

Misuse of Legally Available Substances in Adolescents and Teens